Beating the Bounds on the Lammas Lands 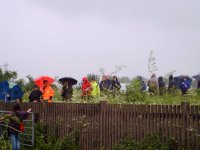 Went out beating the bounds on the Lammas Lands of Leyton Marshes Sunday after seeing an article about it in the Leyton & Leytonstone Guardian. It rained all day but still at least 20 hardy souls turned out to enact this ancient ritual led by local activist Katy Andrews of the New Lammas Lands Defence Committee and Rev Dr Meic Phillips.

My interest in the practice of Beating the Bounds comes from the Remapping High Wycombe project when I did my own symbolic circuit of the town’s boundary. I was intrigued to see it done for real though, particularly as here on Leyton Marshes it wasn’t just a quaint re-enactment of an old custom whereby the devil was beat out of the locality and youngsters where shown the parish limits, it carried a real political message. 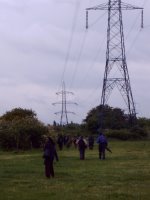 The idea of Lammas Lands is based on the Celtic system of cattle grazing. Parishioners had common rights to graze cattle on these lands from Lammas Day (1st August) till the old Celtic New Year’s Day of 25th March. People stopped grazing cattle here some time ago, after the railways carved up the area, but in 1905 a determined group of local people got together and fought for the of the Lammas Lands to be “devoted to the purpose of an open space in perpetuity.” This still stands and the right to free access to the land and for it not to be fenced in is an important local right, especially at a time was more and more of London is being taken out of circulation by developers. But with the 2012 Olympics on its way, the London Development Agency have their hungry eyes on all the spare land they can grab, and without a word to anyone, they’ve decided that a chunk of the Lammas Lands would be a good place to relocate allotments from Hackney that are going to end up as a Badminton Court or something else equally useful.

Leyton Marshes are a great expanse of land, the like of which you just don’t expect to see in London. Horses grazing, some tethered to the great electricity pylons that straddle the Lea Valley. Into it we plunged with our willow wands bedecked with ribbons. I missed the first “child sacrifice” because I got lost on the pitch and put. I was slightly surprised that this bumping of a child would be carried out, however traditional, the idea of Druids carrying out child sacrifice is now thought to have been Christian propaganda aimed at undermining the influence of pagan practices. 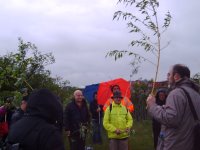 Rev Dr Meic Phillips boomed out snippets of local history and oddities of English law, such as the way that footpaths are established (by carrying a coffin between a dwelling and a church – and you can still do it if you can find a dead person). I struck up conversation with the vicar of the Parish of Clapton and it dawned on me how this distinctly pagan ritual is being appropriated by the church, but not in a christianised form but a blatantly pagan one. Looking and listening to Rev Dr Phillips, I could see that he was just a Druid in disguise, and I started to wonder whether the Druids hadn’t died out but they’d just entered the fledgling Church of England and quietly subverted it. 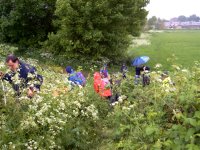 Opposite the River Lea Navigation Katy pointed out the former site of James Latham’s timber yards, currently been turned into the sort of Legoland housing estate that John Prescott plans to have spreading throughout southern England like an outbreak of measles. This was the place my Dad had told me to look out for. He used to drive up from Wycombe to pick the timber up from Latham’s wharfs, back in Wycombe it would be turned into veneered panels. The Lea Bridge Road is my old man’s only point of reference in this neck of the woods.

Through a ditch and up a muddy bank, the rain lashes down, people going down left right and centre, I fall head first into a patch of stinging nettles. This is the stuff, there won’t be a riot like there was in 1905, but we’ll at least get some mud under our nails.

On we go around the marshes, with references to how the calendar change of 1752 divided the grazing practices of the parishes Leyton and Walthamstow who had peacefully co-existed for thousands of years (well a couple of thousand at least). It meant that the people of Leyton who had adopted the new calendar had to take their cattle off the Lammas Lands eleven days before those of Walthamstow who had stuck with the old system. Caused a bit of a row back then apparently.

All along the way there were reminders that our common land rights are under greater threat than ever. There was a real mood of protest and defiance, however twee we must have looked with our ribbons fluttering in the wind. 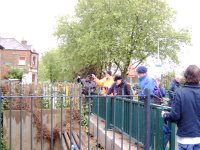 At the end of the walk, drenched, we cast our willow wands into the Dagenham Brook, a symbolic act of returning the willows to water. The next symbolic act was the adjournment to the Hare and Hounds for a pint, where it all started back in 1905.