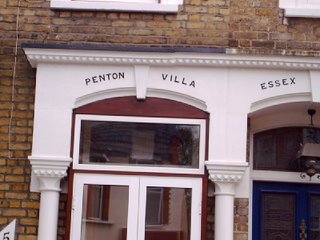 Penton Villa, Leyspring Road. It struck me straight away. I used to live just off Penton Street, Islington, and have written before on this blog about the significance of the site. This is partly based on the etymology of the word Penton (derived from the Celtic to mean rising hill or spring) and E.O. Gordon’s idea of Penton Mound being one of the great mounds of London. Of course the other explanation of the Penton reference is that the land was originally developed by the C18th landowner Henry Penton, hence Pentonville Road.

So what is this Penton Villa doing in Leytonstone? In Leyspring Road as well – enough to arouse the interest of any crypto-topographer. Does one explain the other. Ley = “a field covered with grass or herbage and suitable for grazing by livestock” , and there is still pasture land at the end of the road and cattle were grazed there till quite recently I think. The name of the road though probably came from Leyspring House “Away from the High Road, “Leyspring House”, a fine house with a spring in the courtyard, stood in 33 acres of ground stretching from Browning Road and Bushwood to Mornington Road.” No link to Henry Penton but the spring is there and Leytonstone sits upon high ground as the fantastic views of the city from Gainsborough Road and Blake Hall Road testify (a quick check on google earth shows that the woods at the end of the street are at a similar altitude to Penton Mound 112 ft to the Penton’s 138ft). So a spring on rising ground. Another link back to the Penton Mound is the significance of a spring on high ground near an oak grove being a likely place of Druidic worship, and there are clusters of oak trees just off the end of the road on Wanstead Flats that would have spread much further before the area was heavily developed. As Peter Ackroyd writes: “It is known that in prehistoric worship a holy place was marked by a spring, a grove and a well or ritual shaft.”
What firmly places this in my autotopobiography is the fact that there is another Penton Villa, in Tormoham, 1 mile west of Torquay in North Devon (see comments) not far from where my parents live. And this in turn leads us back to Islington and this blog with the naming of streets and buildings around Rosebery Ave and Grays Inn Road after places in Devon (the link being the developer James Hartnoll from Devon).

note: I recently realised that Penton Villa is in fact in Lister Road and not Leyspring Road. The etymology is too good to resist though and I shall cling onto that chain of association on the basis that Leyspring Road is just around the corner and it is still likely that Penton Villa sits within the old Leyspring Estate. On the hand I’m giving up on indulging in any associations that may arise from the recent conviction of two men who were operating a gun-making factory in their Lister Road house.