Sunday on the Leyton Lammas Lands 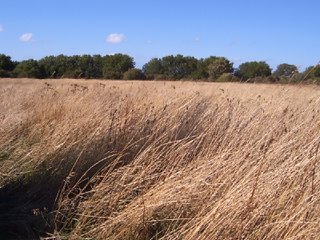 Down to Marsh Lane Playing Fields with H, Nick and the kids. I’m keen to see their reaction to the former Lammas Lands. It’s a perfect late summer’s day, walking weather, great for a 14-miler, but not with a 3 year-old and a pram.

We enter the fields via a council estate off Oliver Road and over a bridge across the Dagenham Brook. Nick points out Purple Loosestrife (Lythrum salicaria) growing on the bank. A red dragonfly darts here and there. Starlings swoop across the sky gathering for migration (Nick reckons they’re bound for Siberia). Windswept long-grasses brush up against giant pylons which send black stripes across the brilliant blue sky. Nick and my 3 year-old look for caterpillars on 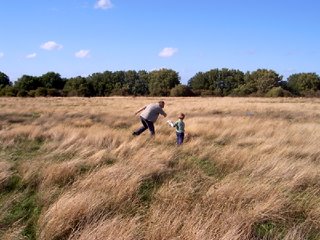 Nick rubs some Yarrow in his fingers – “used for stanching bleeding” (it was also known as Soldier’s Wortweed). There’s Black horehound and Burdock. I’m looking out for the legions of foragers that Richard Mabey wrote about in yesterday’s Guardian. But the only other people around are a family on bikes and two joggers. The Leyton & Leytonstone Guardian reported last week that this is one of the least visited open spaces in the Borough. Even Nick, who the great Londoner writer Will Self claims knows London better than anyone he knows, has never heard of it. Will it remain so unspoilt as the Olympics take over the Lea Valley? 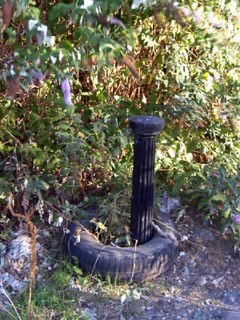 The 3 year-old fills his pockets with stones and chases Nick up Marsh Lane.

(plant identification courtesey of Nick. He gifted me his copy of ‘Pocket Guide to Wild Flowers’ by McClintock and Fitter, 1956 at the end of the day so hopefully I’ll be able to bring a greater appreciation of the local flora to the blog in future).


Off the Map with Pete Molinari at the Sheep Walk E11