Simon Fletcher: A Trot He’s Not: notes on an old comrade 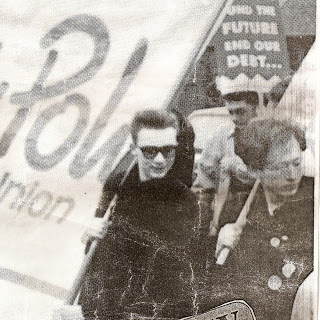 I was intrigued and amused to read the story in The Guardian today that a Channel4 Dispatches report had uncovered that our noble mayor had “links to a Trotskyite faction conspiring to transform London into a “socialist city state”.
If only.
I also used to know one of these alleged Trotskyites conspiring to Sovietise the capital of Capitalism as I was in the Labour Students with Simon Fletcher at City Poly back in the early nineties, when he was President of The Students Union and I was on the Executive and Chaired the Labour Club. If he is now a wild-eyed Trot then that would be quite a transformation – particularly for a fella now drawing a nice fat council tax subsidised salary that another old comrade speculated was in the region of 70-odd grand.
Lovely chap Simon as I remember him and I’d never want to been seen to besmirch his character in any way. But I sniggered into my coffee when I read the following beside a photo of a demonic looking Simon (he was a skinny lad at Poly, like an extra in a Smiths video – see photo, I’m on the right there and haven’t aged much better myself).
“The reports described how his chief-of-staff, Simon Fletcher, began his career working for Tony Benn and won a seat on Camden council in 1993 before becoming involved in Socialist Action. The faction, which sprang from a split in the International Marxist Group, aimed to reconcile its revolutionary programme with cooperation with the Labour party. Its critics claim Socialist Action decided to extend its influence by placing its members in positions of power in a number of organisations.”
Well surely the total failure of any kind of Left-wing influence in the Labour Party today at any level would be testament to the fact that Socialist Action have resolutely failed in their ambition. Hey, maybe they are running London after all, might explain the utter ineptitude of the GLA.

Simon the raging £70k-a-year Trot, was the fella that as President of the S.U. vehemently opposed the student protests that led to us occupying the Poly buildings for two weeks. He ironically viewed it as a Trotskyist manoeuvre and hated the Socialist Workers Party. He was a Bennite like many in the Labour Party at that time, myself included, but more than anything he gave the impression of being a careerist, and why not for a very bright bloke who got a First in Politics and lived and breathed the Labour Party.
I last saw him around the time of the last Mayoral elections looking only mildly embarrassed by Ken’s return to Party that he’d left along with thousands of other activists but who couldn’t bring themselves to rejoin the War Party.

I sense a good old fashioned smear campaign here – a return to Thatcherite style attacks on the Left, ‘Reds Under The Bed’ and all that. And it must just be over the limp Congestion Charge, because otherwise Ken is a model Quisling of the City corporations.

Some of my favourite footpaths