A Summer Solstice Perambulation of the Prehistoric Mounds of London

The idea has been with me ever since I first picked up a copy of E.O. Gordon’s ‘Prehistoric London : its mounds and circles’ – to walk between the mounds on the summer solstice. In her criminally under-celebrated book Gordon describes how the mounds and circles of the British Isles are the remnants of a lost culture. No news there when looking at the solstice celebrations at Stonehenge (30,000 pagan celebrants this year), but London?

The only acknowledgement of the significance of these sites was a record of The Order of Bards, Ovates and Druids forsaking Stonehenge in favour of performing ceremonies at Tower Hill in March 1963. 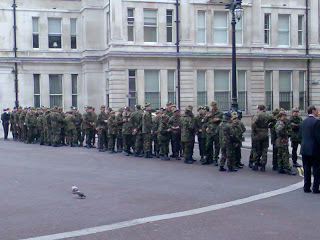 I confess that resonance was added by the fact that at the time I lived yards away from Penton Mound at the top of Pentonville Road. But what vision of the city would be formed by perambulating between its founding sites – the great monuments that were at the centre of a thriving city long before the Romans rocked up.
Westminster/Tothill to Bryn Gwyn/The Tower of London to Penton/ New River Upper Reservoir to The Llandin/ Parliament Hill – a day to achieve it in.
In its original formulation this would have been a grand ritual unifying the city led by the nation’s Druids. In this inaugural event it maybe fitting that it is a family affair – just me and my sister. 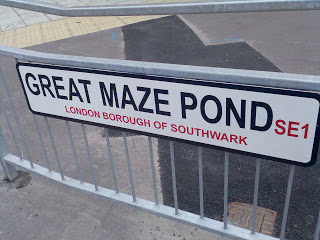 I meet Cathy on Broad Sanctuary at 2.15pm after a detour to the Widescreen Centre to pick up a role of TriX black & white Super 8 film to attempt a film of the ritual – a 3 minute in camera edited film. We are delayed longer than planned at Westminster – get caught up with the small good natured demonstration on Parliament Square in support of the Iraqi people. We blow the cover of the supposed Heritage Wardens who confess to being GLA employees spying on the demo (there are barely double figures present). We move on over Westminster Bridge leaving the Royal Gorsedd and cut behind County Hall haunted by the spindly Wicker Man that they call The London Eye. Then its down Roupel Street, Union Street and into the quiet. We ponder upon the fetishisation of dereliction as we marvel at some beautiful crumbling relics – one a stone doorway with the word ‘OFFICE’ carved into the lintel adrift in an empty street. I realise that with my focus being on the film it cancels out words – my notebook virtually empty – the whole 2 hour wander to Tower Hill only inspiring a single note – ‘Great Maze Pond SE1’ which I take to fit in with the pagan theme of the derive (mazes being created in oak groves and markers of places of druidic ritual).
We spend little time at Tower Hill/ Bryn Gwyn – along with Westminster/ Tothill – as I feel an overwhelming urge to deny the desecration of the sites by the invaders – the so-called Parliament at the ancient place of congregation and communal law-making and the Prison on the site of the British people’s fortress where the severed head of Bendigeid Vran, first king of this island, is said to be buried. I record them on camera but we move on enjoying the calm City streets. 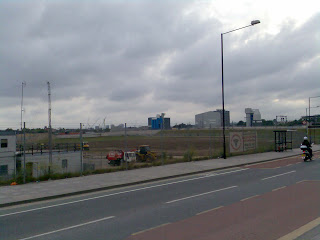 Into Barbican from Moorgate through the halls and out into Whitecross Street guided by Hawksmoor’s spire on St Luke’s. On Goswell I show Cathy the Mount Mills fortification and we follow the Cromwellian defences through Northampton Square and out to face Lubetkin’s Spa Green Estate. We skirt its perimeter and I then point out the Mount Zion Chapel – redolent of a riff in Gordon that links the British Mounds to their spiritual cousins in Palestine (a few years ago I emailed Mount Zion Chapel to enquire what had guided the location of their chapel – I received no reply).
Cathy leaves me at the Penton to complete the final leg alone. It’s 7.30pm and I should stop for a cuppa somewhere but Islington at that time on a Saturday is geared up for one thing only. Also as I push on along Penton Street I’m too awash in a sea of memories of my happy years spent living here.
The Penny Farthing has been given a confused make-over and is now a restaurant serving an odd combination of pizza and sushi – I suppose they don‘t attempt to trade in on the pub‘s heritage as the true home of cricket – the pavilion for the club that would become the MCC after they moved across town to Marleybone. Change takes on odd forms – a tattoo parlour has opened next to the corner shop that supplied me with cans of beer and emergency nappies.

Down Copenhagen Street and walks (and blog postings) past come back as do trips to playgroups and the wonderful library on Thornhill Square. I get second wind.
Turning the corner into York Way I shoot some of the old station posts that seemed to have survived the coming of the Eurostar. Then the vista of the day – the cleared scorched earth west of York Way – a train slowly moving across the land below three enormous silos – I consider running off the remainder of my film here – a Tarkovskian landscape worthy of its own 50ft of TriX. 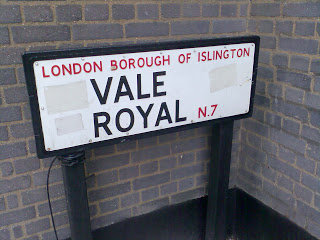 Gordon relates York Way’s original name, Maiden Lane to its purpose of leading people to their places of congregation (Maiden Lane that runs through Covent Garden lines up with Parliament Square). I note the street name of a sorry backstreet behind a warehouse – Vale Royal – the last indicator of the rich mythology linked to this area from Boadicea’s last stand to the first Christian Church (in the world!). 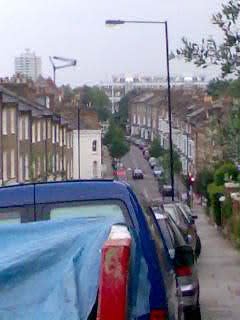 I’ve now decided to keep going without a stop till I ascend the top of the Llandin – a continuous yomp from the south end of Tower Bridge. Up along Brecknock Road where the dark ridge of Highgate Woods marks the horizon. Down through Dartmouth Park and I’m there on Parliament Hill Fields. I must be hallucinating because I see a white robed Druid atop the hill – yes. I grab the camera and zoom in – not a Druid but the freshly painted white monument to right of free speech that exists here. I do a kind of stop-frame dance around the stone till the film runs out and the journey is over – 50 feet of film, 10 miles and 6 hours walking. 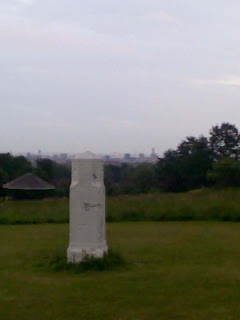