Lewis Mumford and the psychogeography of High Wycombe

High Wycombe gets a mention in Lewis Mumford’s canonical The History of the City. I knew it would – that was what led me to look under ‘H’ in the extensive index, and probably what drew me in off the street to the charity shop.
It is a reference to the ‘agora’, the dynamic centre of the Greek city.
“The early agora had an amorphous and irregular form. If it was sometimes an open square, in a town like Thora it might be little more than the widening of the main street, a Broad Way, just as it was, to choose only one out of a hundred examples in the English town of High Wycombe.”

But why did this revered American academic choose the much maligned and overlooked Buckinghamshire manufacturing town as the “one out of a hundred examples”?
Mumford spent some time in Wycombe teaching a course on postwar reform. The town clearly had a positive influence of the great thinker of urban development. In a letter from High Wycombe Mumford wrote:
“For the first time in three quarters of a year I have a sense of well-being and intellectual assurance.” He explored the small town and it’s surrounding villages during his short stay. He witnessed the sadly now nearly extinct craft of chair ‘bodging’ using ancient lathes, admired the topography of the town and the surrounding landscape. This all had a profound effect on the kind urban development he would later advocate. 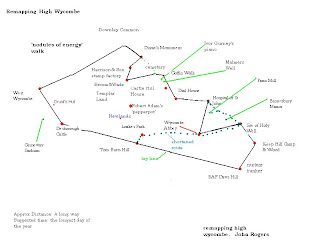 “The garden towns he would later press for in his work for a regionalized America were updates and transplantations to American soil of the kind of “balanced” living he observed in these country communities of the Wycombe valley.” (Lewis Mumford, A Life – Donald L. Miller)The psychogeography of High Wycombe thoroughly implanted itself in Mumford’s psyche. They keep trying to rip the guts out of the place, including the winding streets that he so admired and the traditional crafts with their workshops that he sort to replicate across America. But the power of place is too strong, as I found myself when I was drawn back there from Australia.
When doing presentations on the psychgeo of the town of my birth for a bit of light relief but secretly suspecting it to be true I would say High Wycombe made the modern world, generally when showing a photo of the Dovecote multistorey carpark or the littered alley beside the now demolished Scorpion Records. And here is yet more evidence.


Ode to an English Caff

A note on psychogeography and the dérive

Rural edgeland wander in the rain

New video over on #YouTube - I love tracking a riv

Exporting today’s video - should be live on YouT

I think this is my favourite pylon - between Wanst

The Eastern Avenue- at the end of Thursday’s wal