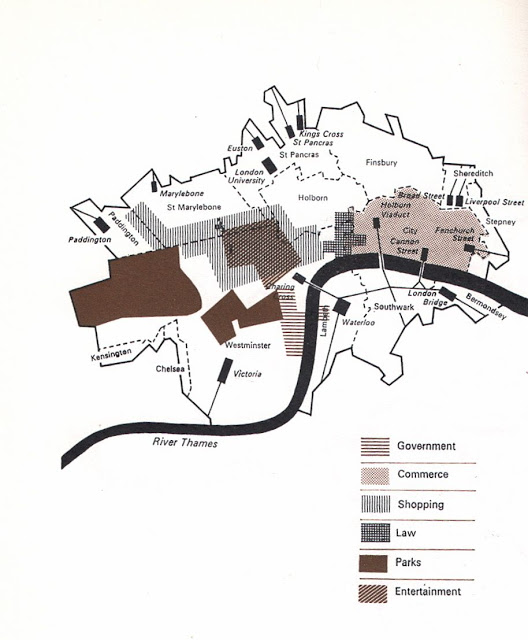 Among the mountain of topographical books that I found in Hay last weekend the one that I bought was A Guide to the Structure of London (1972) by Maurice Ash. I was hooked by a glance at these amazing maps and the chapter titles:
1. In search of London’s identity  2. The skin of an onion?  3. The geography of conflict  4. Journeys and sojourns  5. A strategy for identifying London  6. Town trails

Ash opens by asking the question of whether London exists, “There is just one question to be asked before one begins a book on the structure of London: Does London exist?”
Due to the diversity between Deptford High Street and Hampstead Heath and lack of common interest he wonders if “the entity of London is a fiction”.

I would love to imagine Ash in conversation with Patrick Keiller’s character  Robinson in a grubby formica-tabled worker’s cafe, or perhaps at Brent Cross Regional Shopping Centre. In Keiller’s film, London, Robinson posits that “the true identity of London is its absence, as a city it no longer exists … London was the first metropolis to disappear” (you can watch this part of the film here at 3.44)

Ash suggests that we should think of London as a region rather than a city, a region that has consumed the Green Belt and moved beyond. He identifies this new area of London the “Outer Metropolitan Area (the OMA), which for statistical purposes at least is bow taken to extend from beyond the Green Belt to about 40 miles from the centre of London”.

The book ends with six journeys through London that illustrate the thesis within the book: walking circuits in South London around Elephant and Castle, inner East London from Stepney Green, and inner West London from Earl’s Court; and then wider sweeps by car north and south and the outer metropolitan areas.
I wonder what following the same journeys today would tell us about whether London actually exists or is merely a fiction?