Down in for the screening of Make Your Own Damn Art at Brighton Film Festival. Just scoffing fish and chips before the Q&A
Sent from my BlackBerry® smartphone 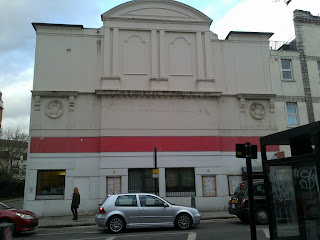 I often walk past this building at the end of Prince of Wales Road and wonder about its grand former life. My guess is a cinema but a minutes googling didn’t turn anything up. Any ideas?

Sent from my BlackBerry® smartphone

In praise of Acton Town Station

You wouldn’t normally think it was a stroke of luck to have to break a tube journey to head off on another branch of the Piccadilly Line. But in the brilliant sunshine of last Sunday morning it was my good fortune to find myself at Acton Town Station.

Looking back towards Central London was like gazing at a mountain range. Wikipedia says the station was originally called Mill Hill Park before the Piccadilly Line barged through.

It’s another of Charles Holden’s masterpieces with it’s graceful modernist curves and geometric windows.
I was grateful for the 6 minute wait for the next Rayners Lane train.

My Revolutions and The Angry Brigade

Last night finished reading Hari Kunzru’s brilliant novel, My Revolutions – an intense first person account of a man’s involvement in a British revolutionary group in the late 60’s and early1970’s.

While I recognised elements from things I’d read and seen about the Baader Meinhof Gang and the Weathermen (the scene in which the activists march down a street in crash helmets reminded me of this image from the Chicago Days of Rage) – the unmistakable parallel is with The Angry Brigade.

Britain’s own armed revolutionary cadre are often forgotten about, partly perhaps because as someone once said their name has a ‘Pythonesque’ quality to it (they also became known as the Stoke Newington 8 which still isn’t as sexy as The Red Brigade) – and that they avoided killing people, unlike the headline-grabbing murders of the European groups.
(Both Baader Meinhof and The Red Brigade have been subjects of highly stylised biographical films with good-looking actors – and the Weathermen have featured in an episode of The Simpsons – can’ think of any appearances of the Angry Brigade on screen).

I tentatively pitched the idea of a documentary about The Angry Briage to Channel4 around the time My Revolutions was published but to no avail (I think the lack of a body count was an issue and that the commissioning editor had never heard of them).

Just as well perhaps, because there is already the excellent documentary above.

In Praise of the Manchester Trams (and Barton Arcade)

Headed up to Manchester for the screening of Make Your Own Damn Art at the Cornerhouse. In Piccadilly Gardens I was instantly struck by the trams – the most enlightened form of mechanised urban transport.