This Other London: a journey into the capital’s lesser known landmarks

Grow your own ideas 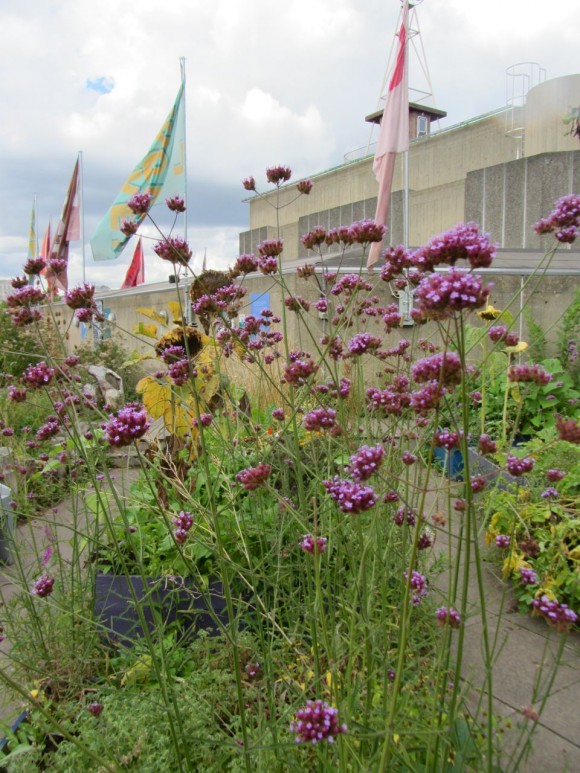 The South Bank Centre at the weekend was engulfed in a festival of homespun politics and DIY culture. Grow Your Own Ideas being inspired by the work of artist Bob and Roberta Smith. 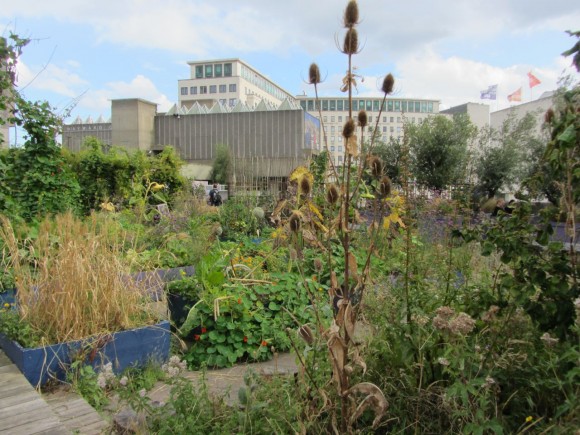 The roof of the Queen Elizabeth Hall sprouted this magnificent wild flower garden.

During the Second World War bombsites became impromptu parks and gardens – the site around St. Paul’s was particularly lush with tall stems of flowers and blossoming Buddliea. 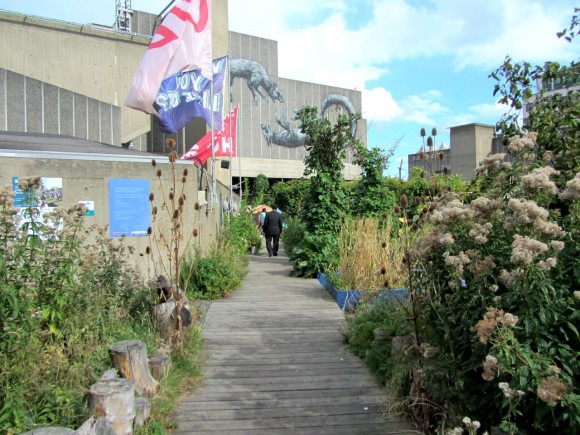 Large areas of post-industrial London could look like this again – such a shame to sell the Royal Docks to the Chinese government when it could be reclaimed by nature. 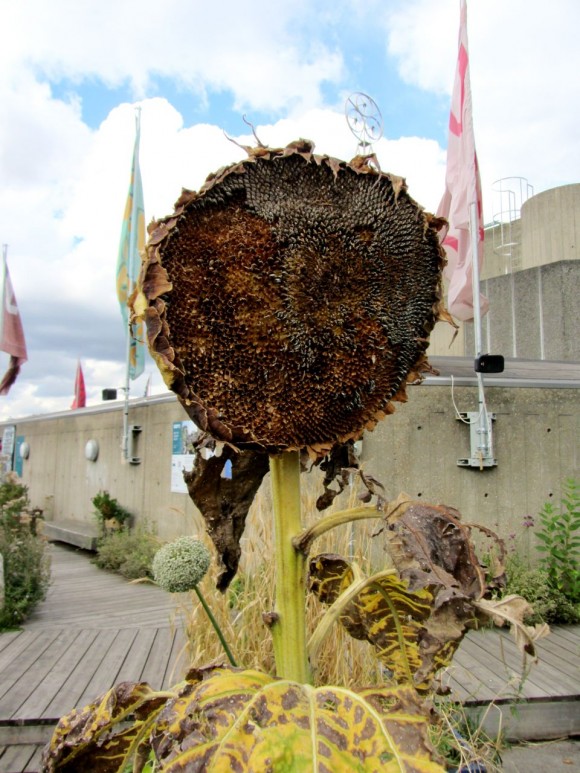 I’d filmed Bob and Roberta Smith making then installing his Mobile Brownfield Site outside the Royal Festival Hall for Pestival in 2010. His old Volvo and its trailer festooned with weeds, nettles and moss. 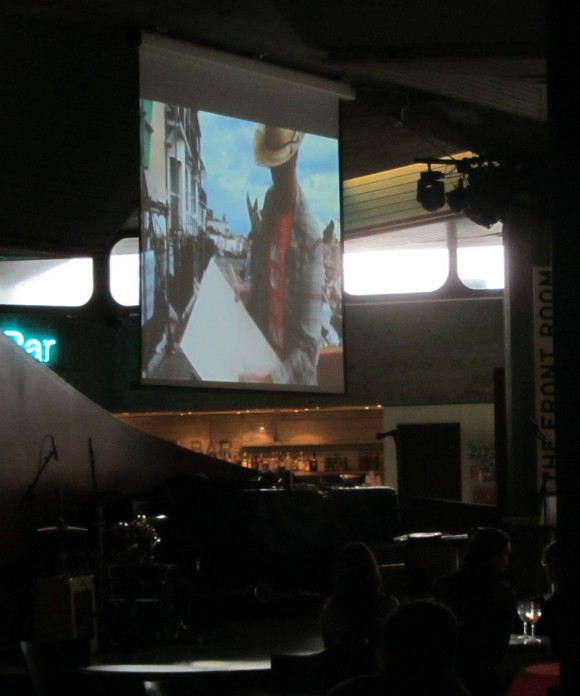 Later in the afternoon on Saturday my film about Bob, Make Your Own Damn Art, was screened in the Queen Elizabeth Hall. 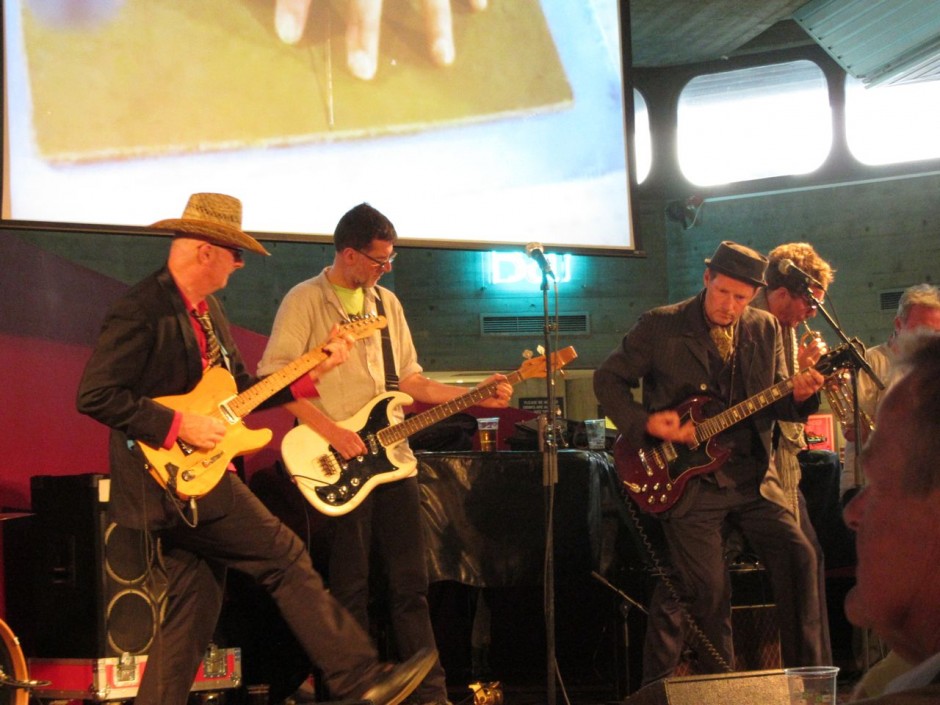 Then the Ken Ardley Playboys punk-rocked out against a backdrop of old archive film demonstrating home crafts. 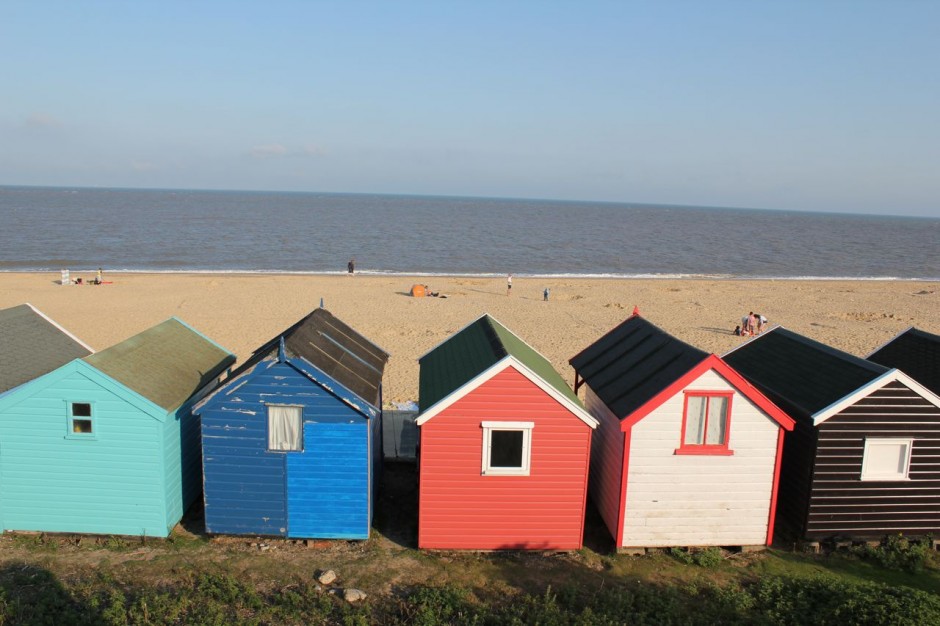 When I picked up The Rings of Saturn by W.G. Sebald to take on holiday to Southwold I was only aware that it was based on a  walk around East Anglia – suspecting that it was set further along the coast in Norfolk. 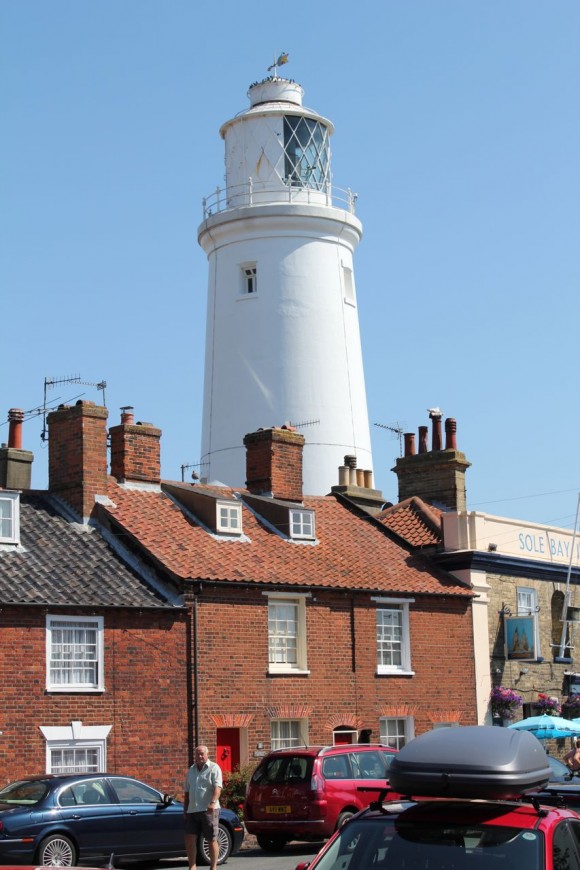 But on the second day I turned to page 75 where there was a photo in the book just as the one above – the house we were staying in was in this row of terraced cottages beneath the lighthouse. 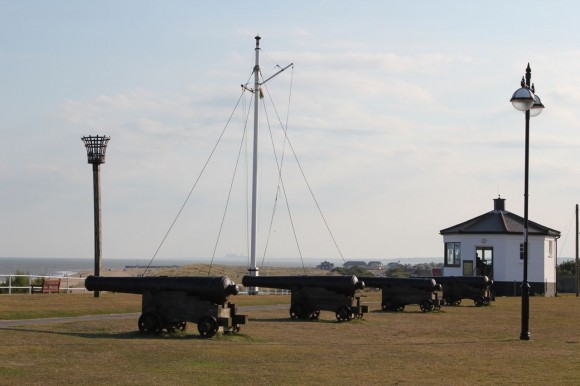 In the book Sebald recounts sitting on Gunhill footsore from his long walk from Lowestoft. He tells the story of the great naval battle that took place off the coast of Southwold on 28th May 1672 when the Dutch navy attacked the British fleet anchored in Sole Bay. 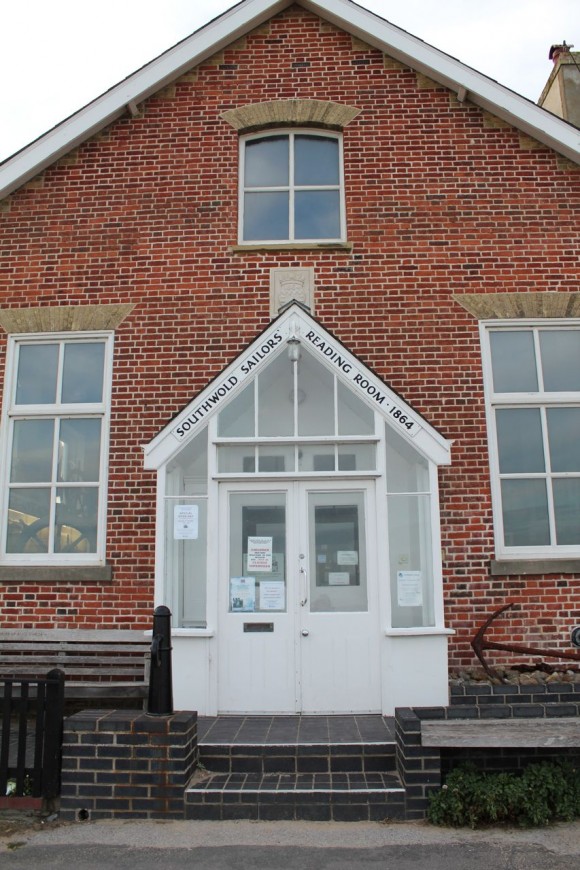 He also visits the Sailors Reading Room which, he writes, is by far his favourite haunt in Southwold. 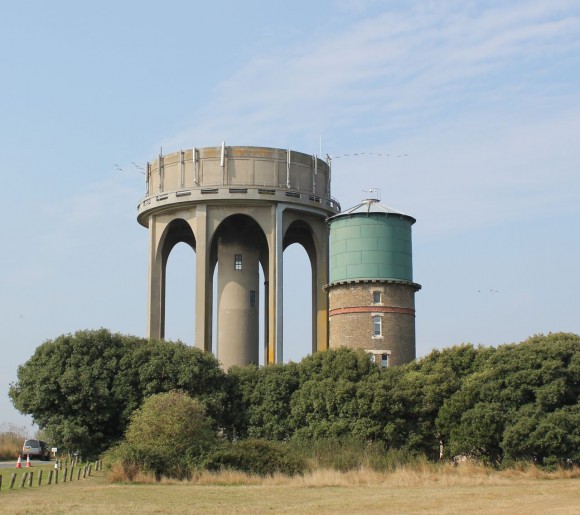 I decide to follow Sebald’s footsteps on part of the next stage of his East Anglian odyssey – from Southwold to Dunwich.

He mentions this 1930’s water tower that dominates the views around the town. 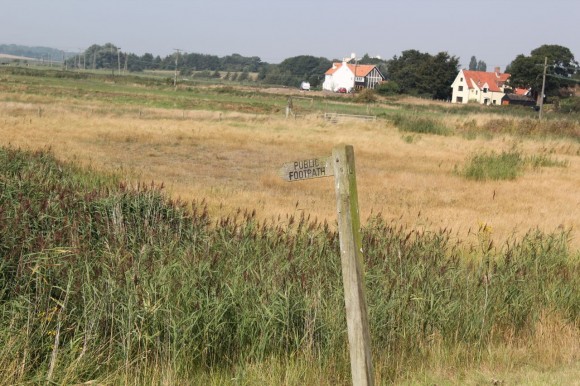 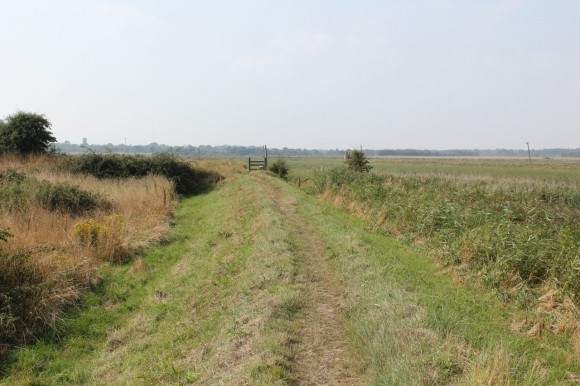 I pick up the footpath that hugs the bank of Buss Creek, it’s a boiling hot day and I start to think about plunging into the sea at the end of the walk 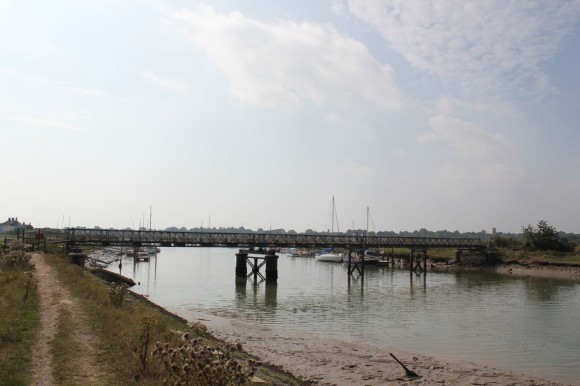 Chapter V in The Rings of Saturn opens with an old photo of this Bailey Bridge across the River Blyth. Sebald repeats the local myth that the narrow gauge train that had run on this line linking Southwold to Halesworth had originally been commissioned for the Emperor of China in the mid-1890s. 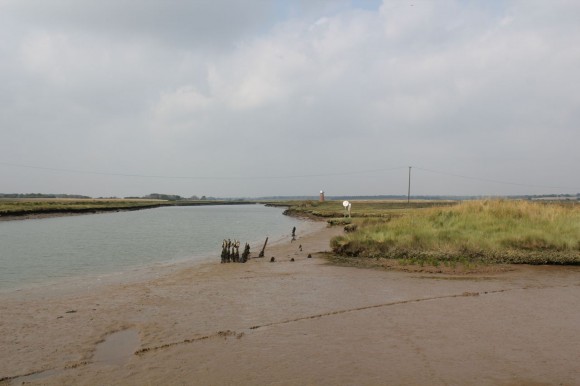 I also attempted to match the next photo in the book which he somehow managed to take from the reverse angle looking downriver towards the bridge but I’m not prepared to sabotage the entire walk wading across the marshes to replicate somebody else’s photo. So this will have to do. 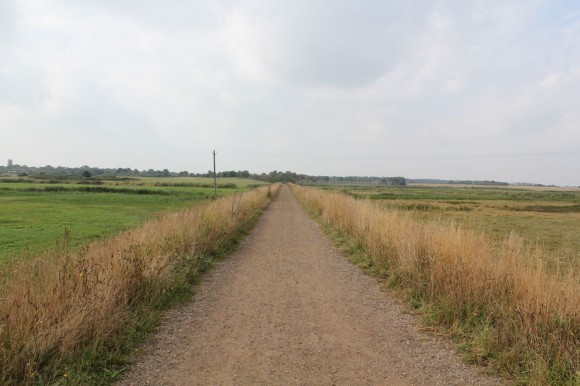 He writes of how he was thinking about the Dowager Chinese Empress who had most likely commissioned the train as he walked along this stretch of the disused railway line – bound as he was for Dunwich. 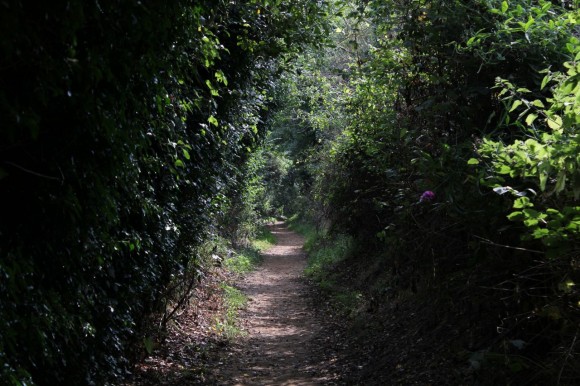 Sebald cut across the marshes to Walberswick but I became seduced by this bridleway. 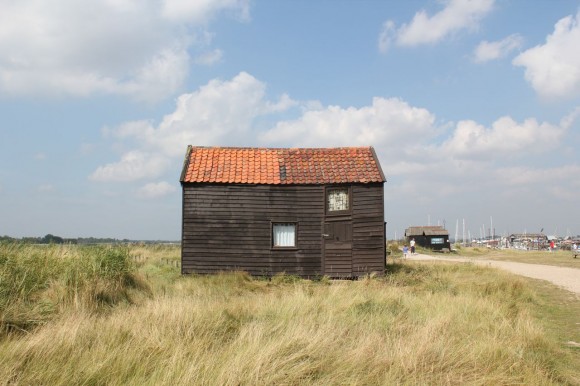 The sheds in Walberswick are more humble than the brightly painted beach huts that sell for over 60 grand across the Blyth in Southwold. 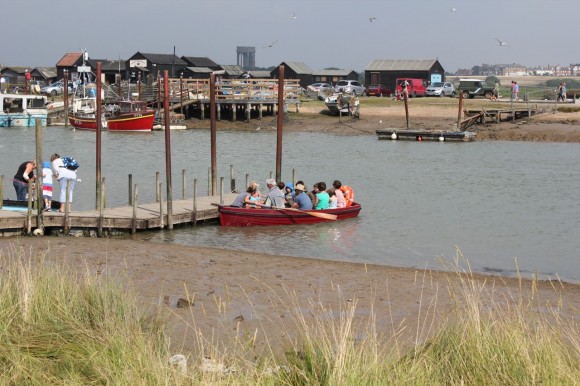 This is where I left the Sebald trail – he schlepped onwards to the lost city of Dunwich while I took the ferry back to Southwold. The lady rowing the ferry told me she was a 5th generation ferrymaster, a role passed down in her family from the 1850’s. 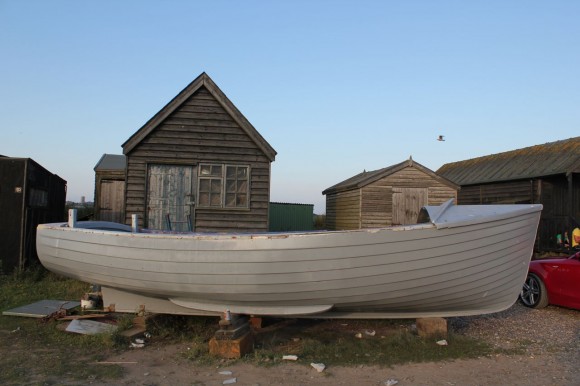 Back across the Blyth I consider buying fish fresh from the boat but somehow standing in a queue breaks the magic of walking – I need to keep moving. 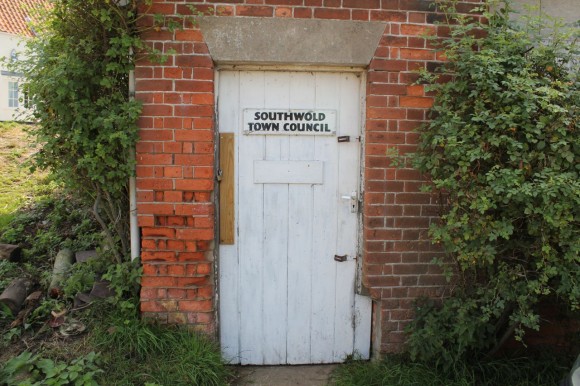 I soon arrive back at the civic centre of Southwold – for all its airs and graces you have to admire the modesty of its Council accommodation.

(have a look at my video postcard from Southwold ) 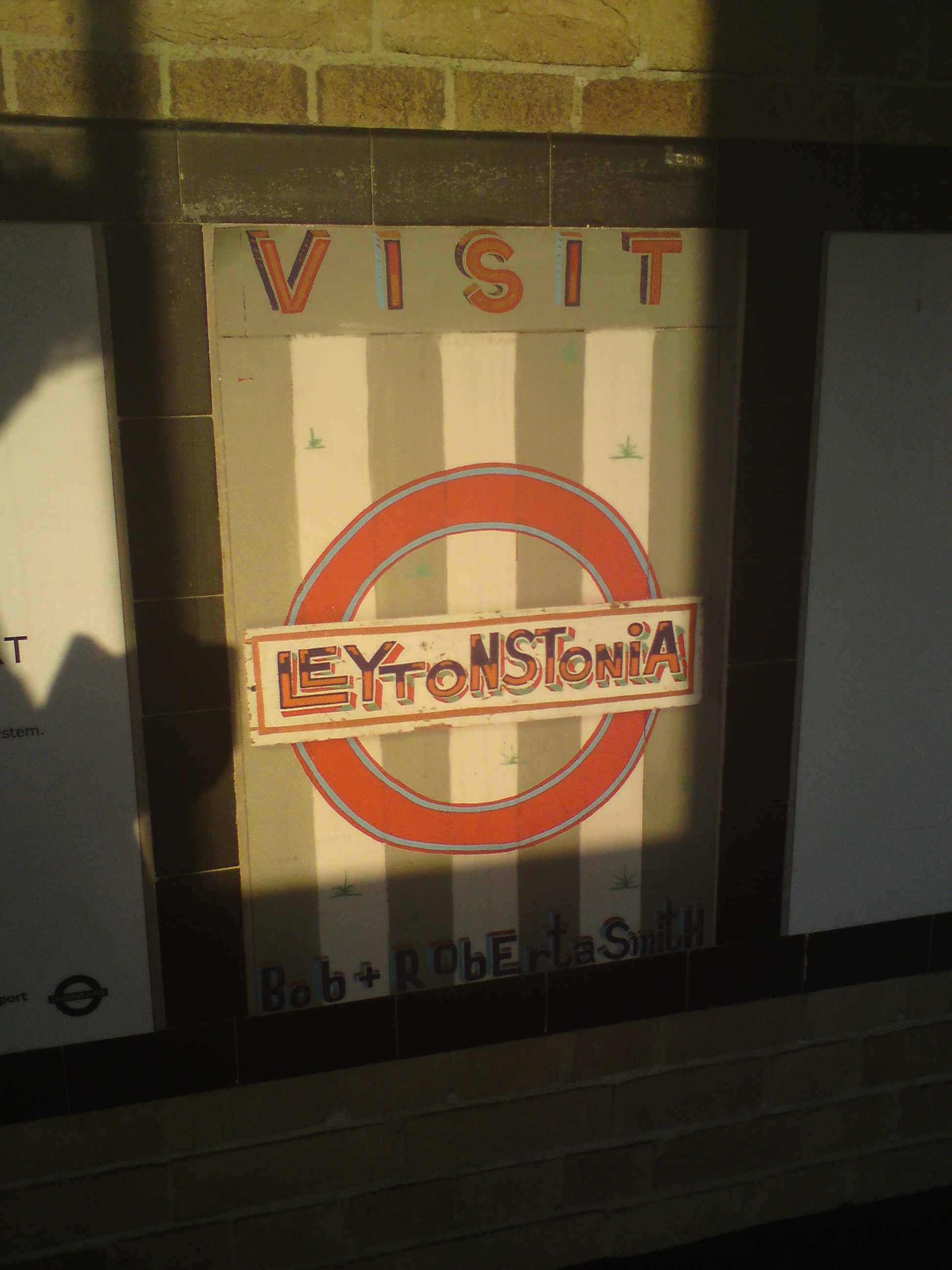 I spotted this wonderful Bob and Roberta Smith poster at White City Tube Station a few years back.

When I went back with a better camera to document it properly it had gone …. but where?

Perhaps it shunted further west down the Central Line to Perivale or Greenford.

Southwold from fugueur on Vimeo.

Made this yesterday as soon as I got back from a week in Southwold.