Strange goings on out east of Leytonstone – in that mysterious hinterland around Epping Forest before you emerge into the bosom of Essex proper. Two bulletins from this eldritch zone appeared in my reading today.

“Maybe it’s time I cleared up some misconceptions and actually allowed some genuine facts about what I’ve done come to light,” Stefan Jaworzyn announces, from deep within his inner sanctum in Chingford, on the outskirts of East London”Wire magazine, Feb 2014

The ‘noise guitarist, improviser and extreme film connoisseur’ had apparently been holed up in Chingford for 17 years in ‘self-imposed solitude’. After ending a recent forest yomp myself in Chingford one Sunday evening it appears to be the perfect place to look inwardly – or even to further an appreciation of ‘video nasties’ and ‘transgressive art’  as Jaworzyn has done from what I can glean from the first two pages of Edwin Pouncey’s enlightening article.

Possibly more alarming though is this vision of the future prophesized in last week’s edition of 2000AD. These panels in Strontium Dog lept out at me. 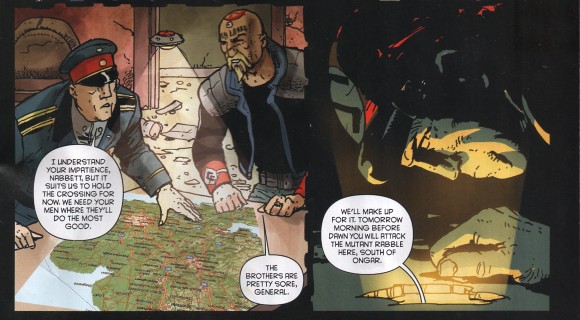 The future neo-Nazi Brotherhood planning a slaughter of mutants “south of Ongar”. Luckily Johnny Alpha successfully rumbles this genocidal scheme and hopefully in this week’s comic we’ll see the mutant army kick some future neo-Nazi butt in a battle Royale at Ongar.