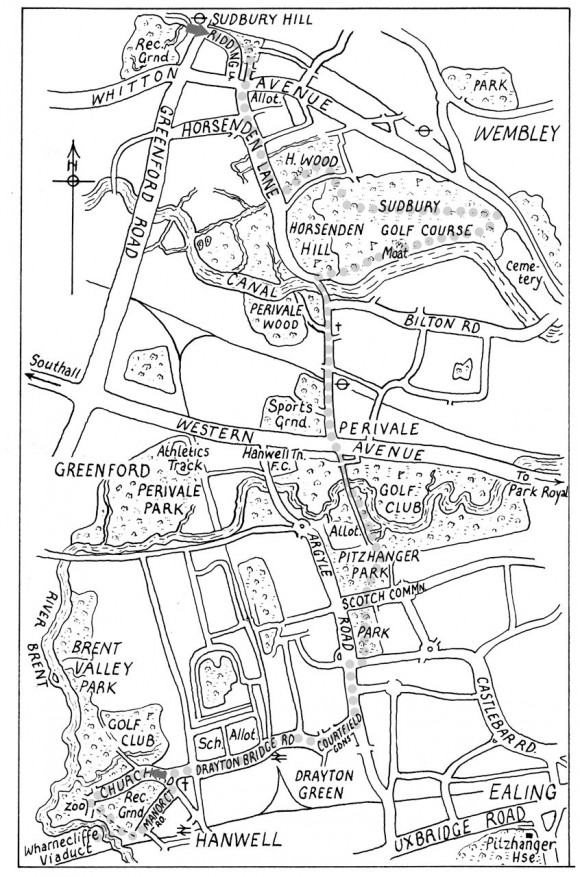 This is the walk I did on Remembrance Sunday in 2012 following a neolithic trackway from Sudbury Hill to Hanwell. A walk that takes you over the summit of Horsenden Hill, according to legend the final resting place of the Saxon chieftain Horsa. Then down through Perivale where Sylvester McCoy’s Dr Who kept visiting in the late 80’s with one episode spookily referencing Horsa’s ghostly steed as told in The Legend of Horsenden Hill. Perivale was also where Horsa’s wife consorted with the little folk giving the name of ‘Fairy Vale’  (ok, there are more prosaic and plausible explanations for the name such as ‘Pure Vale’ for the quality of the corn grown there – or ‘Pear Vale’ due to the orchards). Through the lychgate of St Mary’s you find this ancient church dating from 1135 with a C16th white weatherboard tower.

You pass through ‘Blood Croft’ where the bodies of seven Saxon warriors were excavated still wrapped in hemp cloaks fastened by bronze brooches (did they die in the epic battle between Horsa and his rival Bren who had married then dishonoured Horsa’s daughter Ealine? The point where Bren forded the river and was slain in battle took his name – Brentford)

The walk ends beneath the great cathedral of the Industrial Age – Brunel’s Wharnecliffe Viaduct opened in 1837 – the first Grade I listed building in the country. Stand beneath its cavernous arches and hear the whoosh of the turbo trains bound for Slough.

From This Other London – adventures in the overlooked city

The rise of urban walking

Made this short animation last night with a few facts about the rise of urban walking – particularly in London where ‘active urbanites’ as Tfl call them, are reclaiming the city.