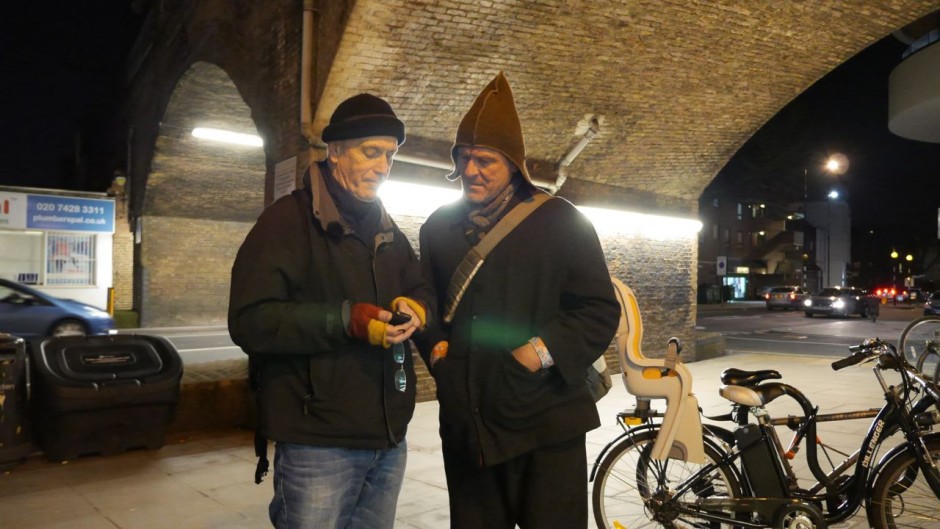 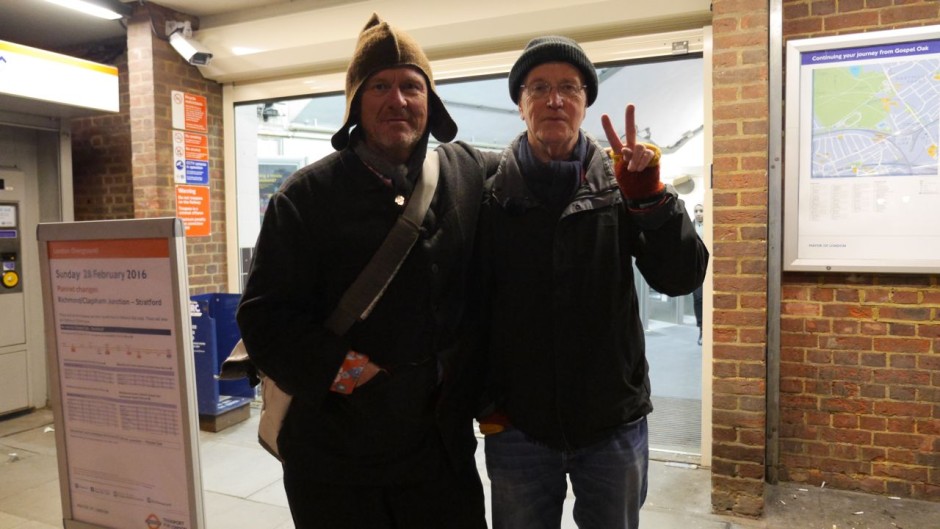 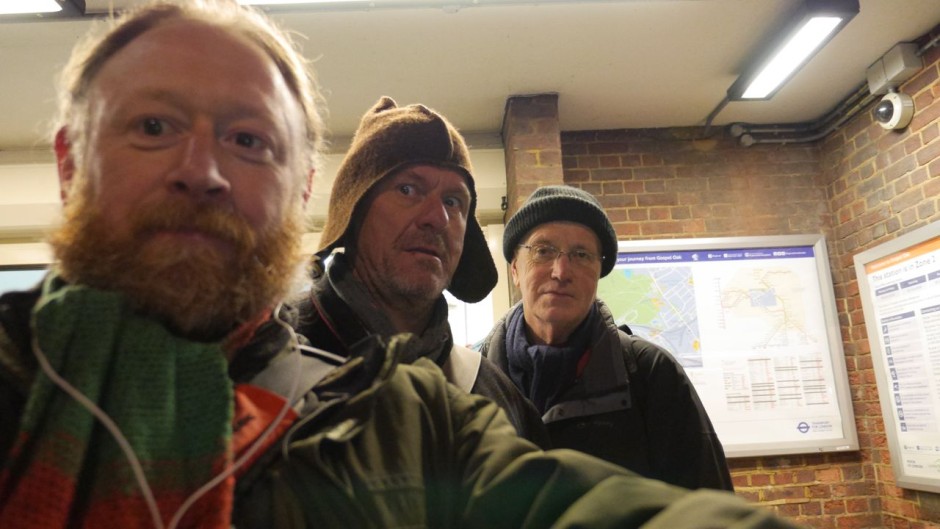 I was out last night filming the first section of Iain Sinclair and Andrew Kotting’s nocturnal 35-mile yomp around the London Overground – a reprise in reverse direction of the walk they performed for Iain’s book about the ‘Ginger Line’, London Overground. I scampered alongside with my camera (often falling behind then having to run ahead) from Haggerston before leaving them at Hampstead to head off into the freezing cold night with my GoPro strapped to Andrew’s head.

I’ve been shooting the film in small sections since last summer with just a couple of shooting days left. We started at Rotherhithe in July, a walk that ended with Andrew dressed as a Straw Bear traversing the Old Kent Road. The previous walk saw Iain joined by Radio On director Chris Petit surveying the area around Willesden Junction and Old Oak Common.

Shooting is always the fun bit – soon starts the edit of long nights sat in front of a screen. Look out for news of screenings in the summer.

It wasn’t my intention to go for a walk, merely to try a new breakfast spot that opened recently near the Jubilee Pond on Wanstead Flats. But perhaps starting my day by crossing that first section of open ground triggered something in my noggin because as soon as I’d digested my croissant I was off. 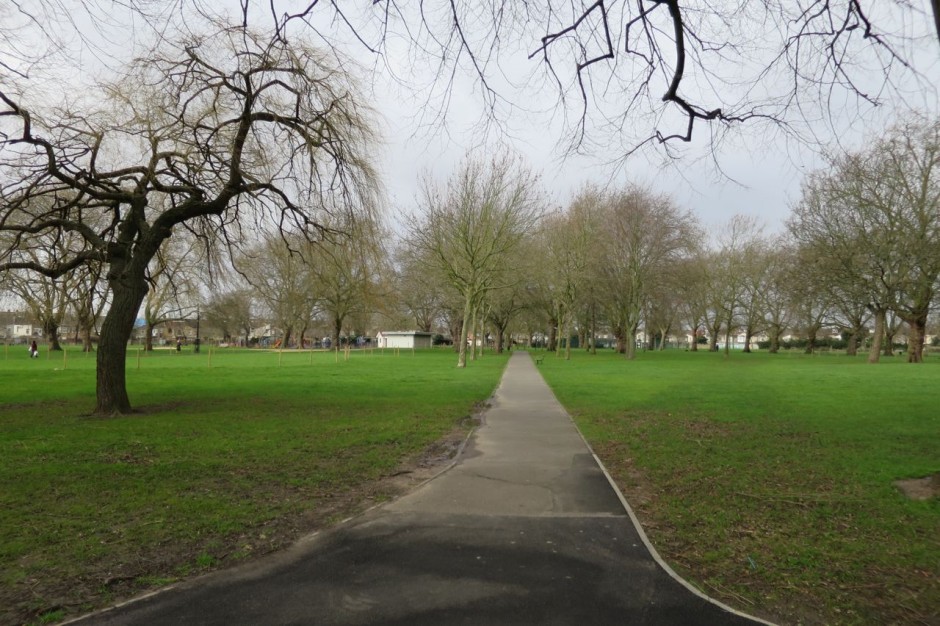 I dropped by the Wanstead Tap but it was too early and the shutters were down, so I thought I’d take a look at what some gentrifiers are trying to brand Forest ‘Great’ (I kid you not, soon to be as galling as ‘Awesomestow’). Forest Gate was the first place I lived in London as a callow bumpkin of 18 and I loved it straight away, although that was on the other side of Romford Road near West Ham Park. The Woodgrange Road hub was a slightly obscure adjunct, particularly with Stratford equidistant.

I counted 4 posh coffee shops but otherwise the area looks little changed from other recent visits. When recounting this to a friend who lives near the Flats they told me the new bakery with its mortgageable loaves of artisan bread had been the focus of Cereal Killer Cafe style anti-gentrification protests, which on further research (i.e asking facebook friends who live in the area) manifested itself as some graffiti spray painted on the windows at night. 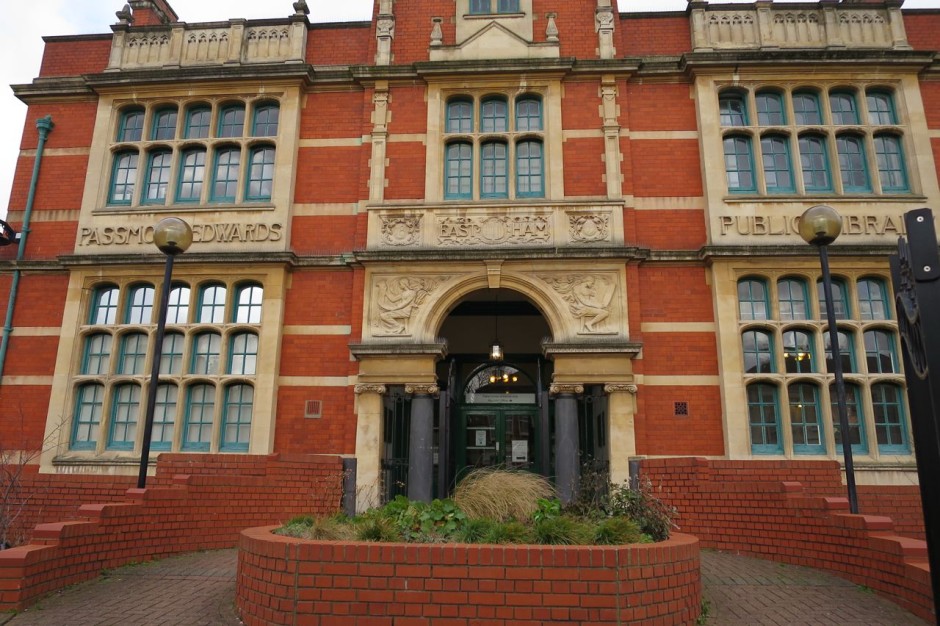 After crossing Romford Road and discovering that I’d superglued the zoom rocker on my camera I decided to walk in a straight line to Ilford – sort of in protest at my own stupidity and to finally spend a Waterstones voucher I’d had in my wallet for a year.

I soon found myself wandering through the gates of Plashet Park where a strong gale battered the trees and bushes. Undergrowth that a couple of years ago was found to be harbouring a couple of adult boa constrictors. 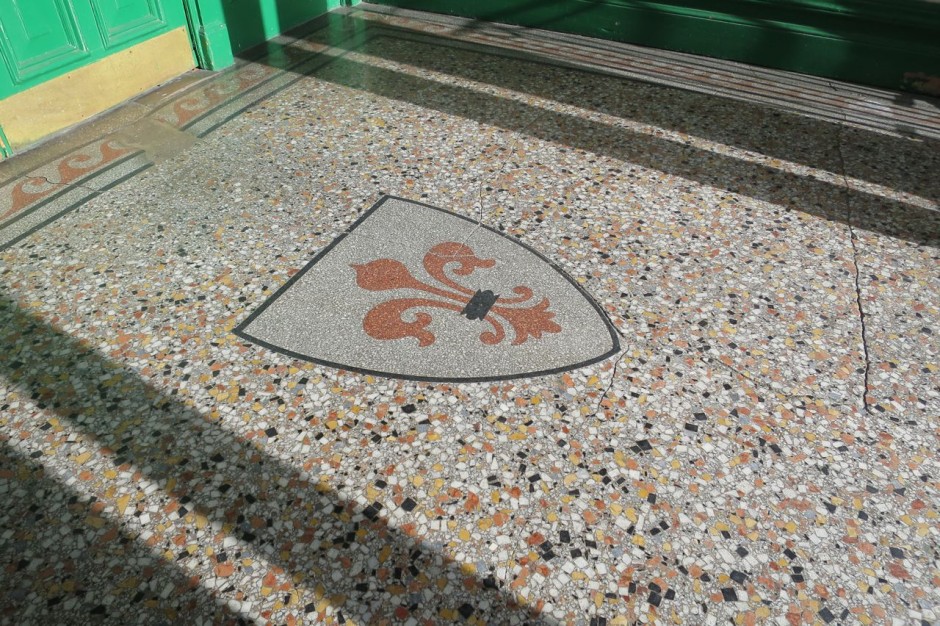 On the far side of the park is the majestic Passmore Edwards Public Library, today used as the Newham Registry Office. The foundation stone was laid in 1898 and the mosiac flooring at the entrance still radiates civic pride. 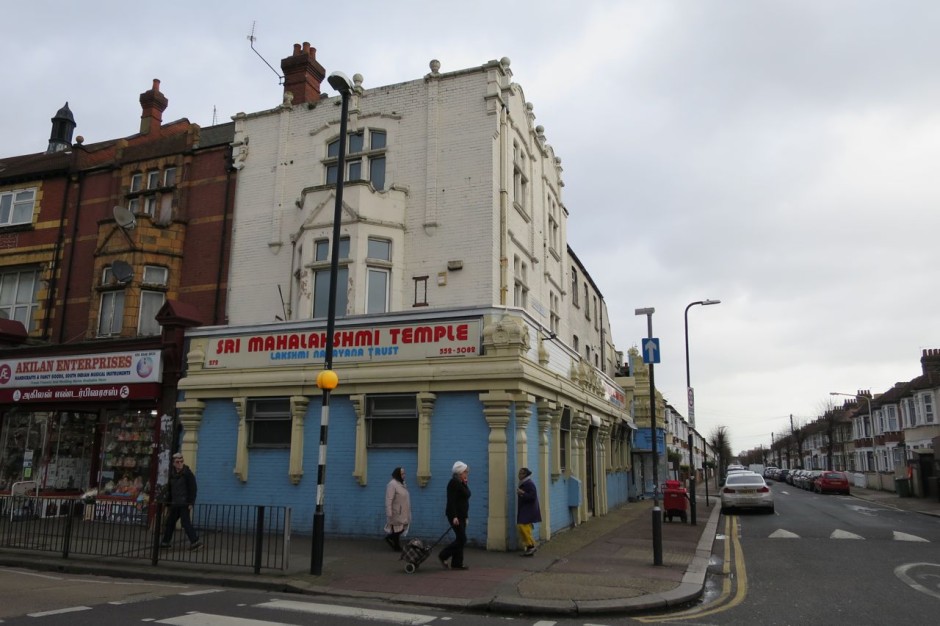 The Sri Mahalakshmi Temple on East Ham High Street North is an unavoidable beacon that lit up my eastward alignment to Ilford. Not far away by Little Ilford School stands an even grander Hindu place of pooja – Sri Murugan Temple. 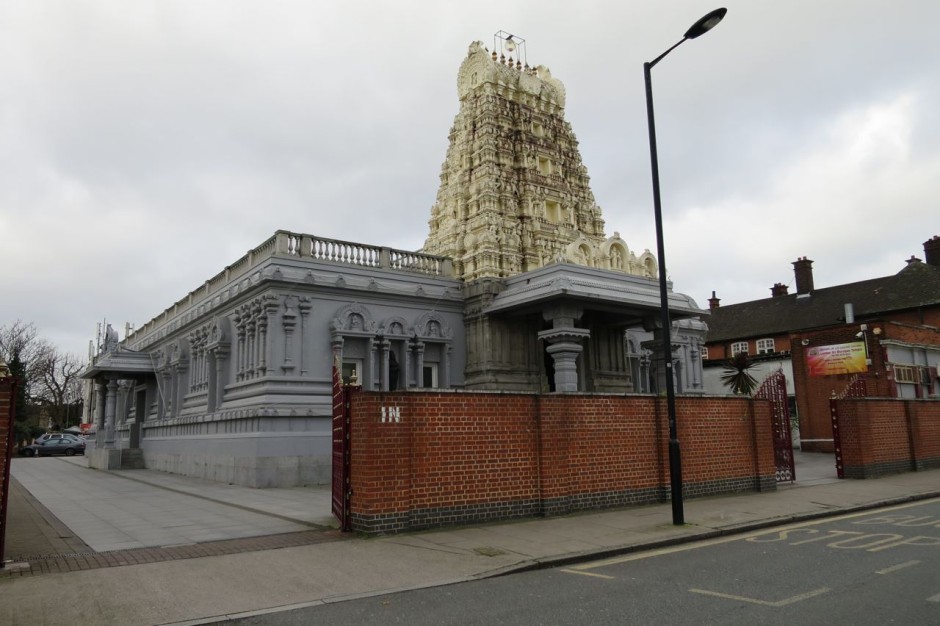 Music wafted out onto the street, I loitered by the door for a bit before kicking off my trainers near the steps and tentatively going inside. Various forms of worship were taking place in the huge space, some people just sat cross-legged on the floor praying-meditating, there was a feeling of total peace. Sadly my messed up knees prevent me from sitting on the floor so I sat on one of the scooped plastic school chairs placed by the wall for old people, and soaked up some of the good vibrations. 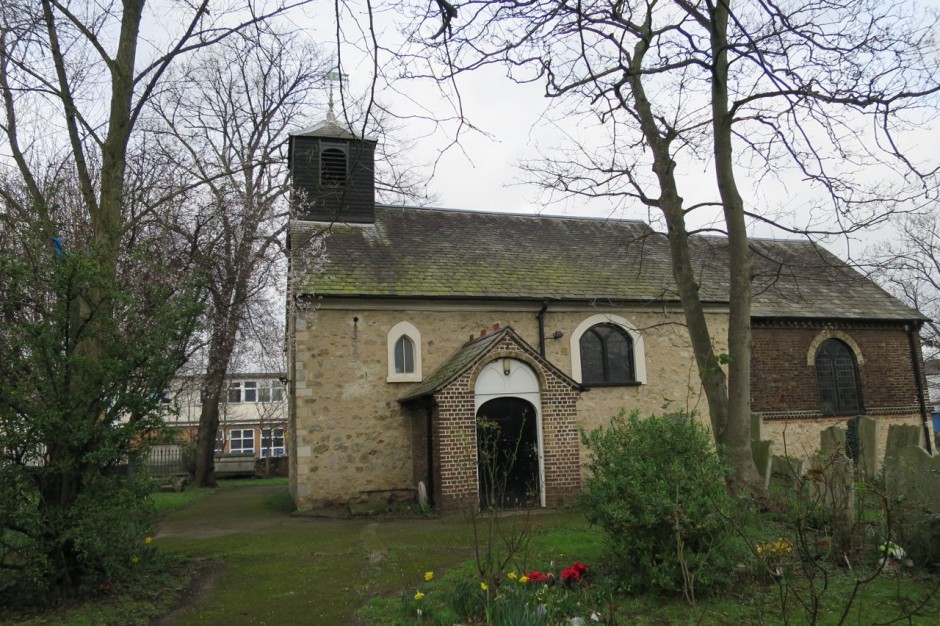 Continuing along the straight track brought me to the door of the ancient church of St. Mary the Virgin Little Ilford. The stone church dates from the 12 Century but replaced an older timber church that could have been established in the pre-Conquest period. It was at this point I realised I was accidentally following a route I’d planned for This Other London Book 2 – a work still in progress – but had shelved when other avenues appeared. My interest in Little Ilford had been sparked by reading about the 18th Century antiquarian Smart Lethieullier who is buried somewhere in the church.

Lethieullier was descended from wealthy French Huguenot refugees who’d settled in nearby Aldersbrook. Lethieullier carried out some of the first surveys of the Roman villa at Wanstead Park and recorded explorations of the Ambresbury Banks earthwork in Epping Forest. 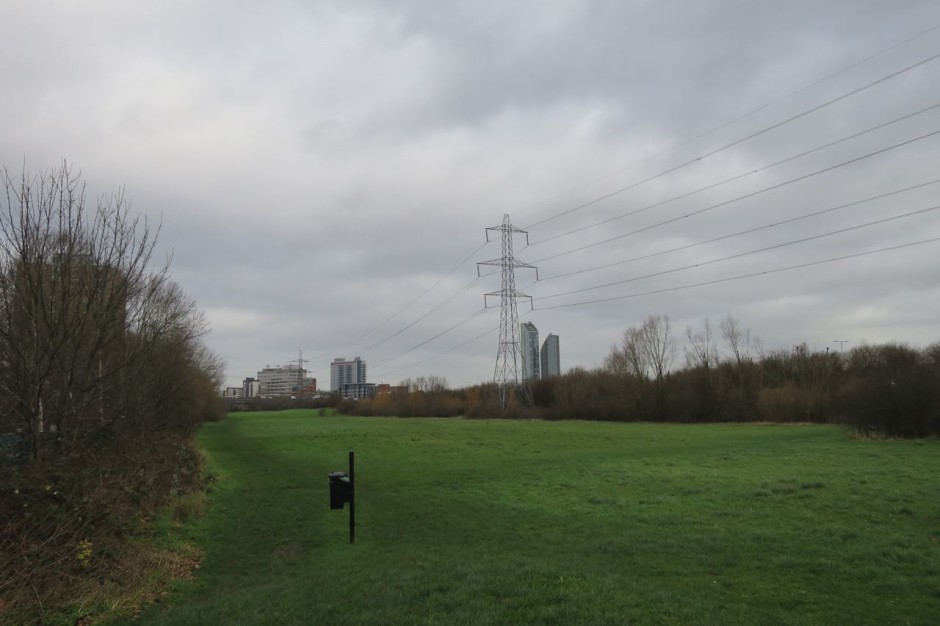 The gale force winds now brought a smattering of freezing rain along for the ride as I entered Little Ilford Park – an odd pear shaped open space with pylons hugging the border with the North Circular Road. I toyed with finding a crossing to the River Roding and working my way down to Barking, as per the itinerary I now recalled planning 2 years ago, but Little Ilford Park is reluctant to let those who enter leave. 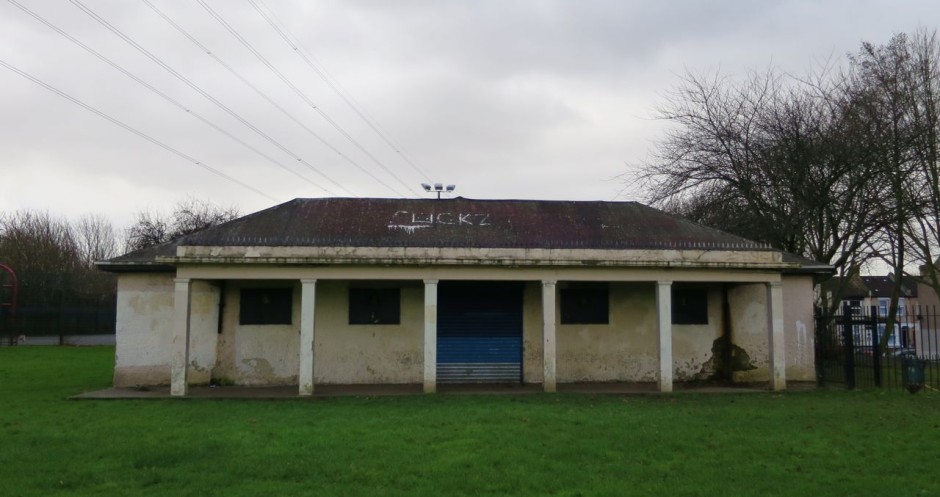 This squat concrete pavilion seems to have been inspired by Soviet bus stop design – or maybe it was the other way round in the manner that the Moscow Metro was inspired by Charles Holden’s Piccadilly Circus station with Holden returning the favour with his Russian influenced station at Gants Hill.

I watched the rain for a bit from the shelter of the pavilion trying to imagine playing any kind of cricket on whatever pitch lay beneath the thick clumps of grass before walking the length of the park and exiting for Ilford High Street beneath the grand North Circular fly-over.

That original exploration could now be back on the itinerary.

I hadn’t been back to the Trew Era Cafe since its opening back in March 2015 so I was keen to see how this inspiring project was progressing. The cafe was one of the outcomes of the successful campaign by residents of the New Era Estate in Hoxton to fend off developers. My old mate Russell Brand opened the Trew Era Cafe as a social enterprise with the aim of supporting people in abstinence based recovery. The aim was also to provide a community space for local people and to source as much produce as possible from the surrounding area. 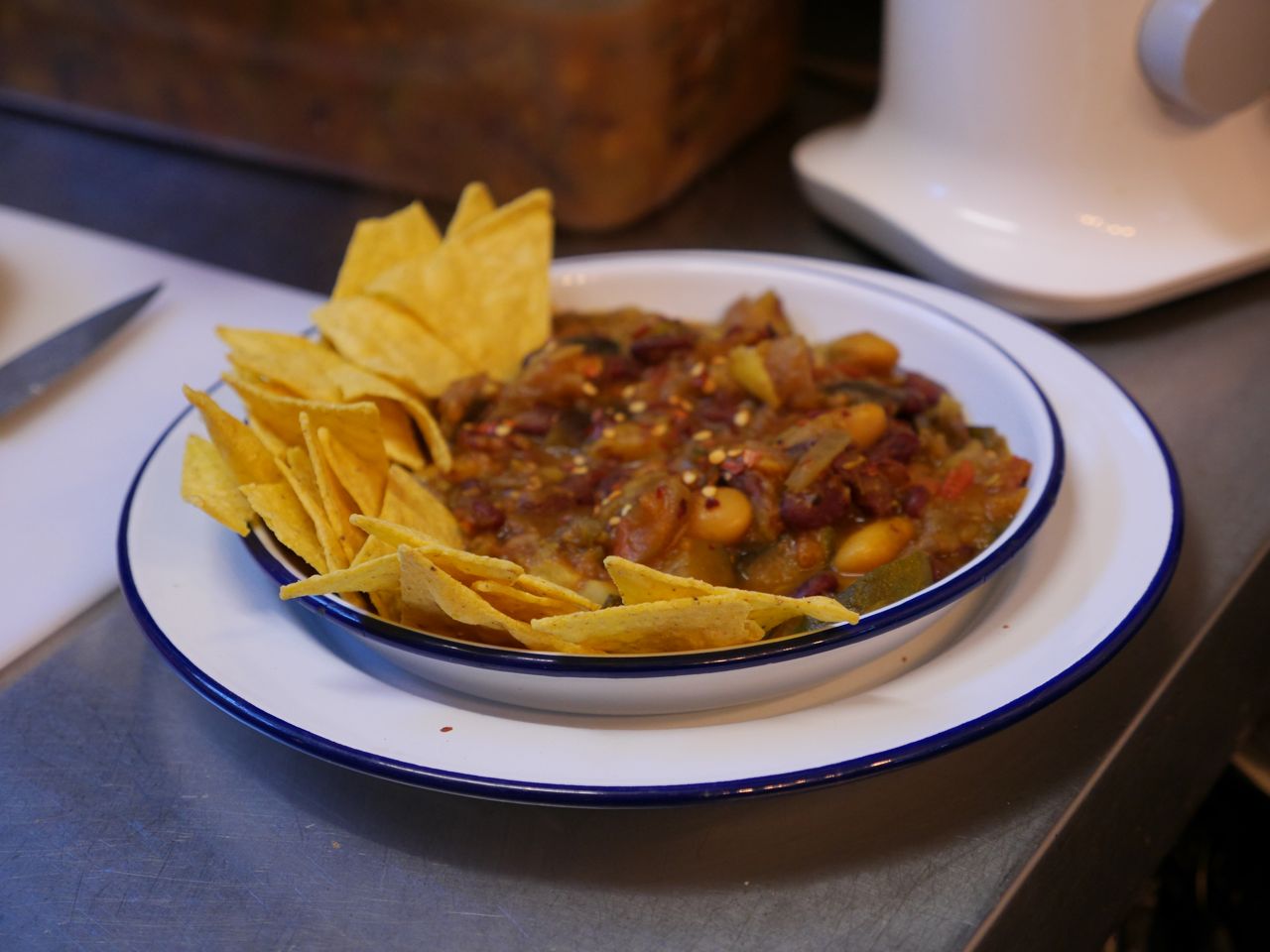 The herbs used in the delicious range of vegan and vegetarian dishes are grown in pallet planters in the walled garden at the back. All the produce is organic. They plan to find allotment space to grow their own vegetables which will form part of the training programme. 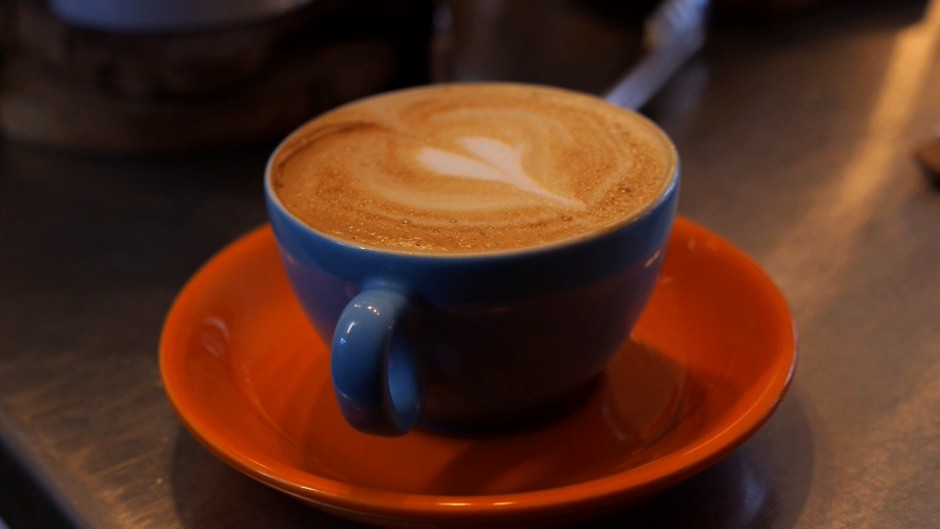 The coffee is roasted by Mission Coffee nearby in Clapton, who also provide barista training. The jams and granola are produced locally. Edit Hats beanies are on sale, for each purchase Edit donate a hat to the homeless. For every postcard bought from the selection hanging on the wall a tree is planted in Scotland and you can even go along and help with the planting. There are free Sunday morning meditation drop-ins and regular evening meetings. 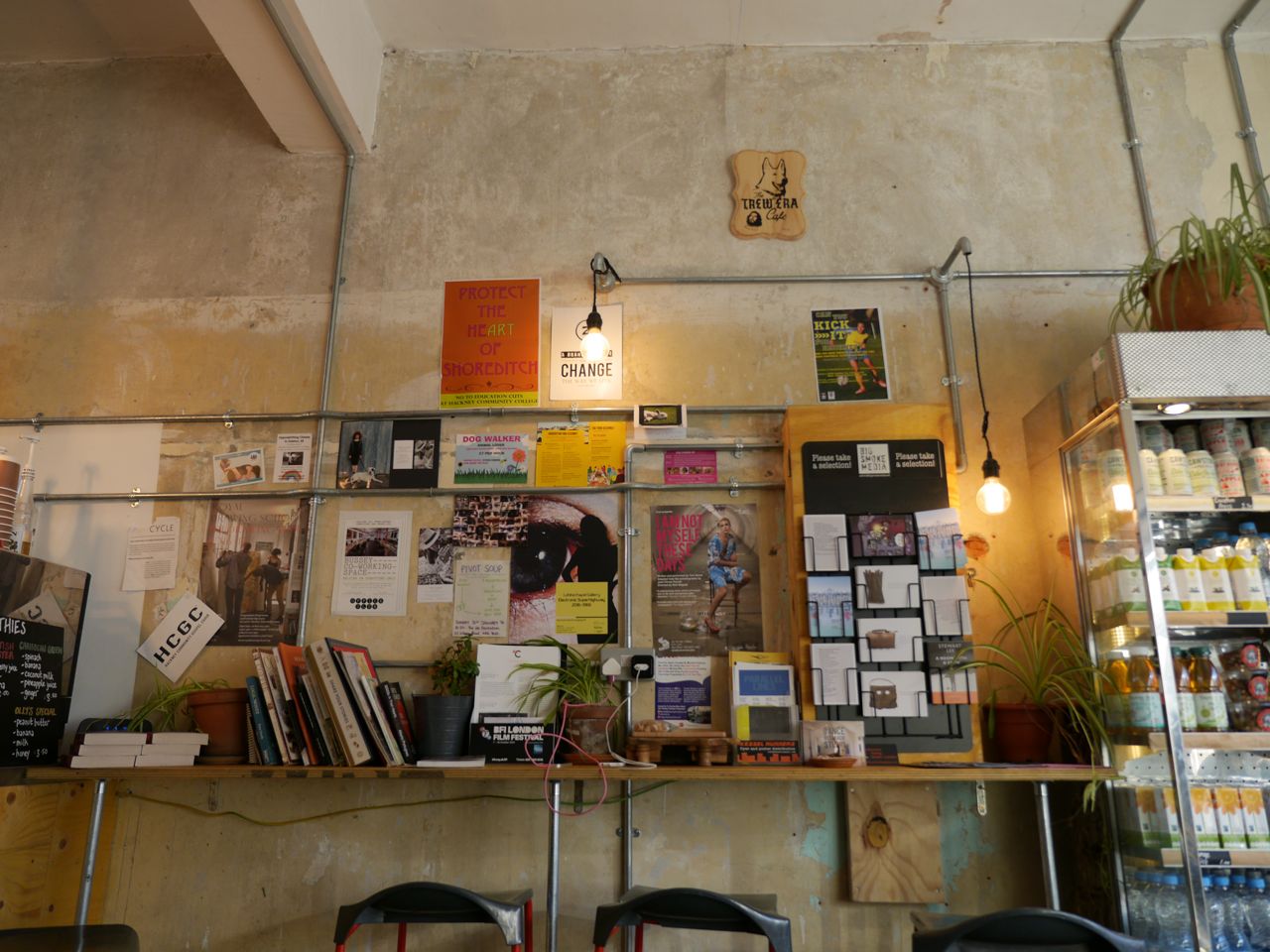 There’s a great friendly vibe around the place and the coffee is fantastic. The plan is to hopefully expand into an vacant unit next door to provide a more diverse range of training and support. Hopefully the Trew Era message will spread beyond Hoxton to the wider world. To badly paraphrase Billy Bragg – the revolution is just an organic soy milk cappuccino away.

Aimlessly wandering the Bloomsbury grid with Gandhi and Lenin

I wanted to go OUT and shoot SOMETHING happening. I followed my instincts – the Central Line to Holborn then sucked north into the grid vortex of the Bloomsbury Squares. I’m sure there’s some sort of occult geometry underlying the lay-out of the garden squares of Bloomsbury (distinct from those arranged on the slopes of Pentonville and following the curve of the high ground across Barnsbury). 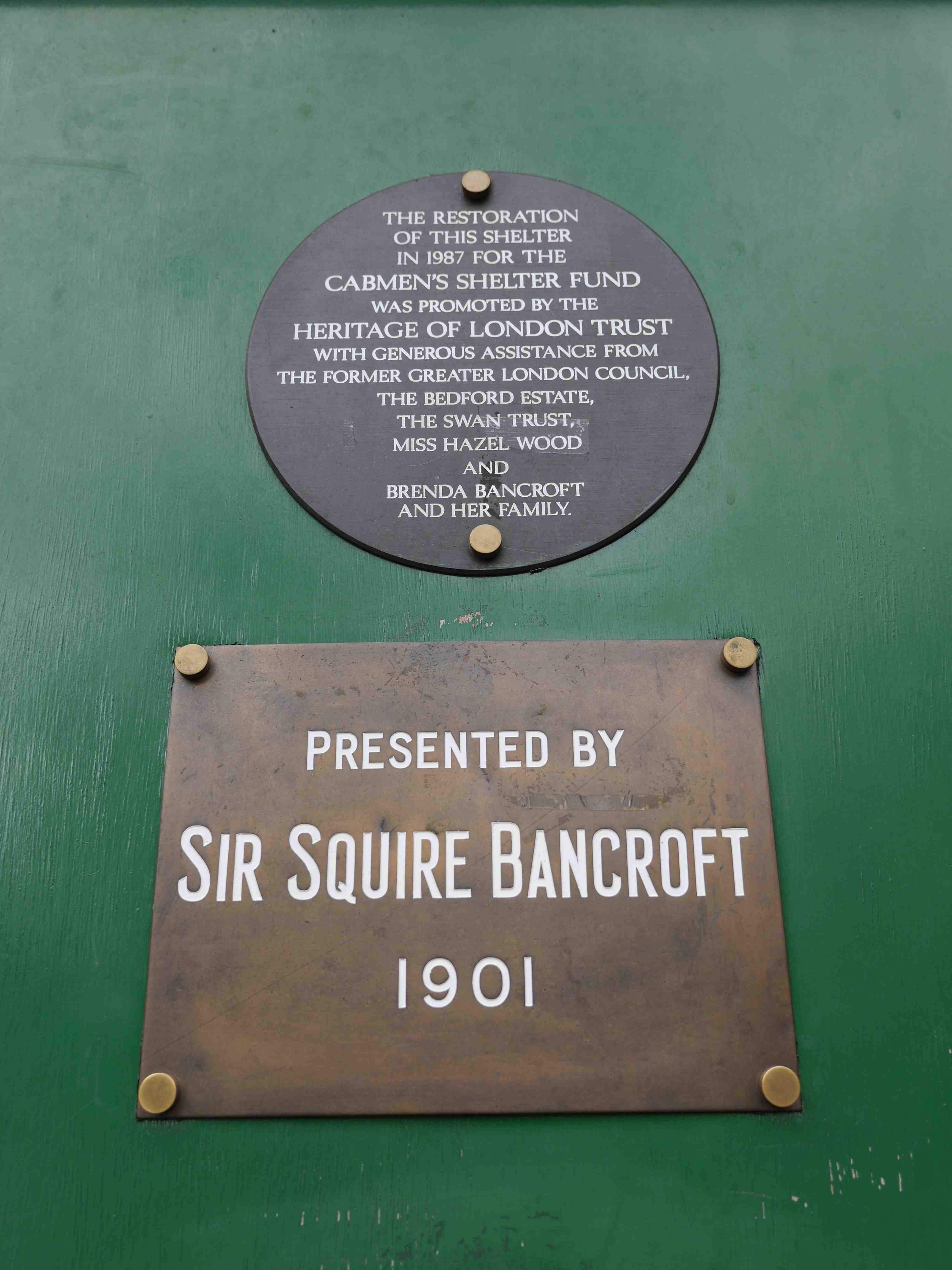 The ‘Cab Man’s Tea Huts’ fascinate me – but you know what, I’ve never actually been in one, how is that possible? The one at Russell Square was presented by Sir Squire Bancroft in 1901. Bancroft was a significant figure in Victorian theatre, instigating a new form of realist theatre “drawing-room comedy” or “cup and saucer drama”. He produced a play by the bizarre figure of Edward Bulwer-Lytton who I wrote about in This Other London – the man who had has wife locked up in an asylum for disagreeing with him, coined a number of cliches still used today and most bizarre of all, wrote a novel that was later the source of Nazi cult that believed in a subterranean secret source of energy and insisted the Luftwaffe develop a Flying Saucer in the last months of the war.

Those tea huts are strange places and who knows what other odd powers have been unleashed by the Bloomsbury grid – just look at the art deco detail on the gate posts of SOAS in the video and the brutalist brilliance of the Institute of Education.

Why have I not really taken notice of the great signage on Al-Hambra Barbershop on Leyton High Road before? Is because I’m usually too busy counting the growing rash of Estate Agents colonising this end of Leyton’s ancient thoroughfare. I was on my way to Deeney’s for the first time this morning in my never-ending quest for a Cronut when it stopped me dead in my tracks. It’s a real work of art. 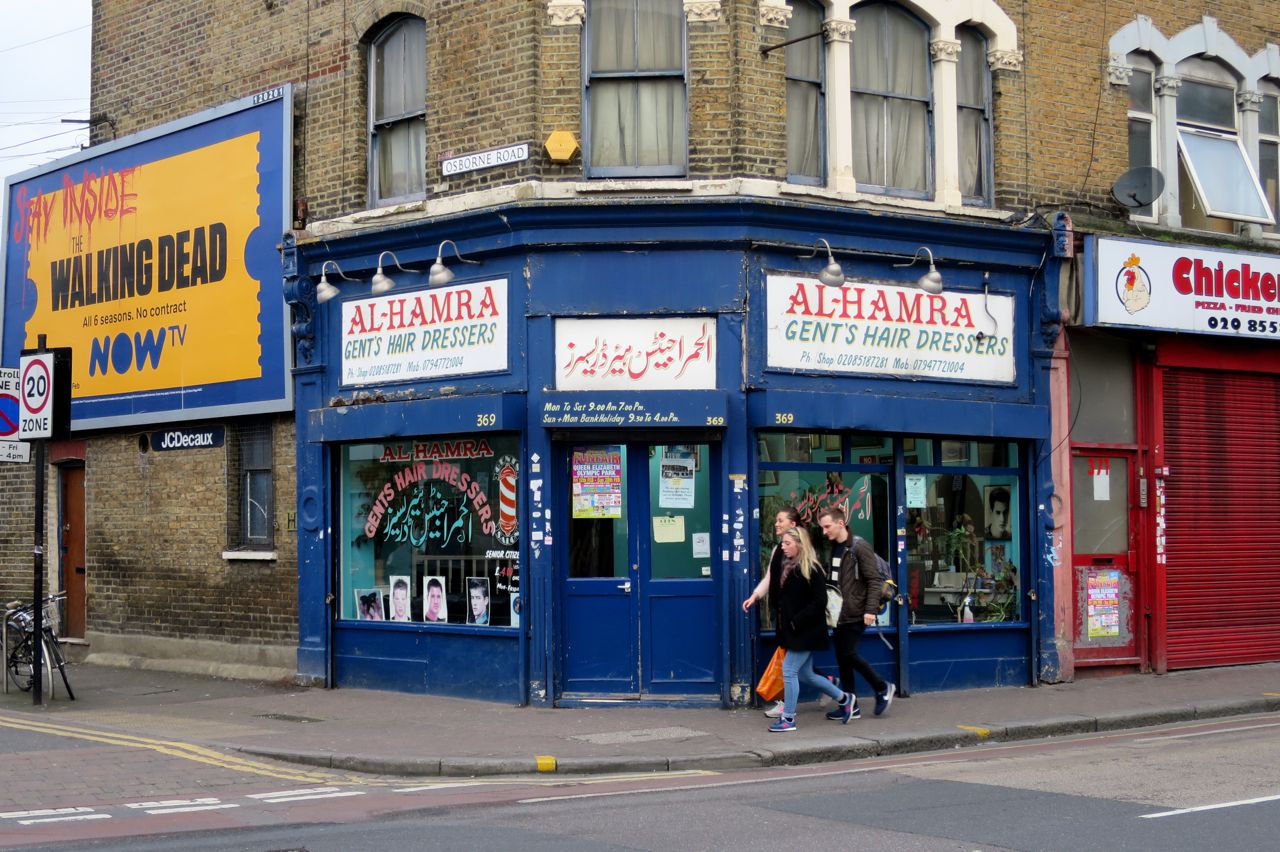 This end of Leyton High Road didn’t get the Notting Hill make-over in the run-up to the Olympics that washed over the section around the Ruckholt Road approach to the Olympic Park but frankly it doesn’t need it, blessed as it is with great ghost signs and this peach on Al-Hambra. 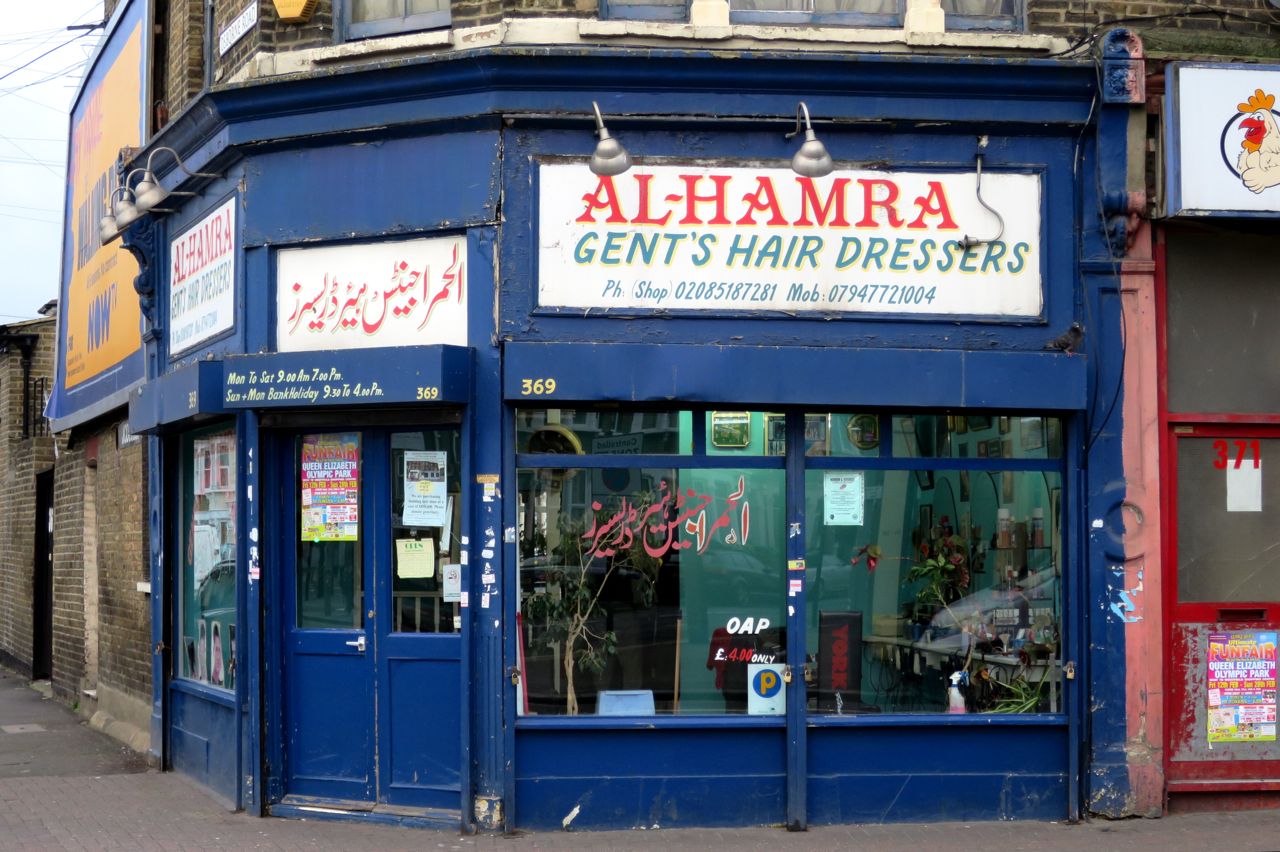 I like the fact it’s a Gent’s Hair Dressers – two words – and not a Barbers. Makes me feel like I could go in and get my long locks trimmed whereas in a Barbershop it’s simply a matter of what number buzz cut you want.

Deeney’s didn’t have any Cronuts after all that.