Waiting for the burning thing on the Thames 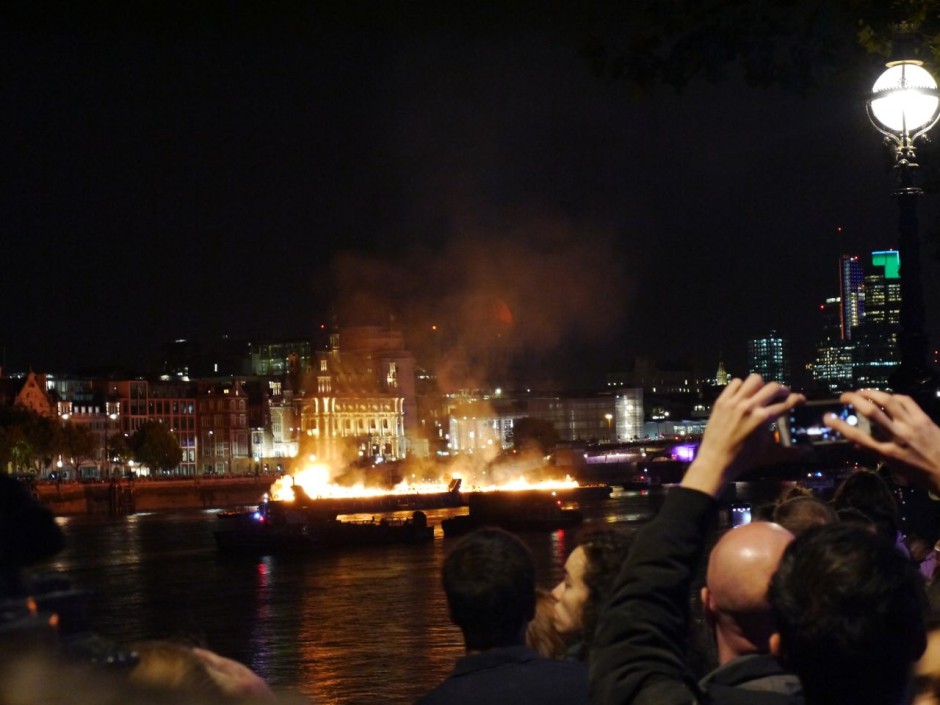 As someone who documents London I half feel I should have had more of an awareness of the burning thing they were doing on the Thames yesterday. You see, it’s the next day, I’m sat at a computer and I still don’t know what the event was called (if it had a name) but I’ll go to the trouble of looking up the artist’s name before I post this to my blog (David Best). It was only when we were lined up on the terrace of the National Theatre waiting for whatever it was to happen that a lady who pushed in next to us decided to explain how poignant it was that they would be marking the anniversary of the Great Fire of London with some actual fire – her Dad had been a fireman, it was very poignant she kept saying. I had to agree in the end although I wasn’t exactly sure why it was poignant, London had been burnt to the ground loads of times in the past, what made this one special. However, lined up on the terrace of the National Theatre we were waiting for something we weren’t quite sure what.

The real reason we went to the South Bank wasn’t for the burning thing at all – my youngest son was desperate to go on the Bumper Cars at NAMCO in County Hall the night before he went back to school – as an end of summer holiday blow-out. It was loads of fun. I actually won a race on the motorcycle game as well, which was a massive surprise to us both. My wife had chipped in that afternoon with a comment that were setting fire to something on the river at 8.30 outside Tate Modern and it looked good – so we tagged it on to the NAMCO jaunt.

Sometimes it’s interesting to be at a large event like this just to be part of a large crowd. Sometimes that makes it hell. Being there with your 10-year old son sometimes helps tell the difference. He looked at the dark river in the gap between the trees and wondered whether we’d see much and whether we’d be better off going to get something to eat instead. ‘Come on’, I said, ‘this is a special event’. ‘Yes’, he agree, ‘if we went to the cinema we’d just be watching a film, here we’ll be witnessing history’. Well a recreation of history I thought but I was too moved by his poetic sentiment I to be pedantic.

‘Come on let’s get something to eat’, he said.
So much for witnessing history, I thought, trumped by hunger.

But then an orange glow lit the sky. ‘It’s started’, I announced to my son.
‘Really, I can’t see anything’, he replied unimpressed.

We moved through the crowds lining the South Bank as far as we could go and reached London Studios where my son was able to bag a spot beside a lamp-post on the railing – a prime position just 10 minutes earlier when the crowds were 6 deep, now oddly threadbare.

We waited for it to arrive. Was it a barge alight? We still couldn’t tell.

We waited some more. We saw more flames shooting up in the air from the Thames. It still didn’t seem to be getting any closer. Whatever it was seemed to grind to a halt off the shore of Bernie Spain Gardens. Craning our necks around the lamp-post we could now catch a proper glimpse of the burning thing we’d been waiting for.
‘There it is’, I said to my son.
‘Ah, yes’, he said, ‘what is it?’, he asked
‘It’s a, a bonfire I think’, I said, ‘a bonfire that has mostly burnt out by the looks of it’.

What had clearly been a raging inferno just 10 minutes previously was now a politely burning pile of wood. If only the real Great Fire of London had exhausted its flames so quickly we wouldn’t have had to wait on the river bank for an hour 350 years later.

‘Ah’, he said, ‘shall we go and get a Burger King at the station’, he said. So off we went to Burger King in Waterloo Station before the burning thing on the river ever reached us.