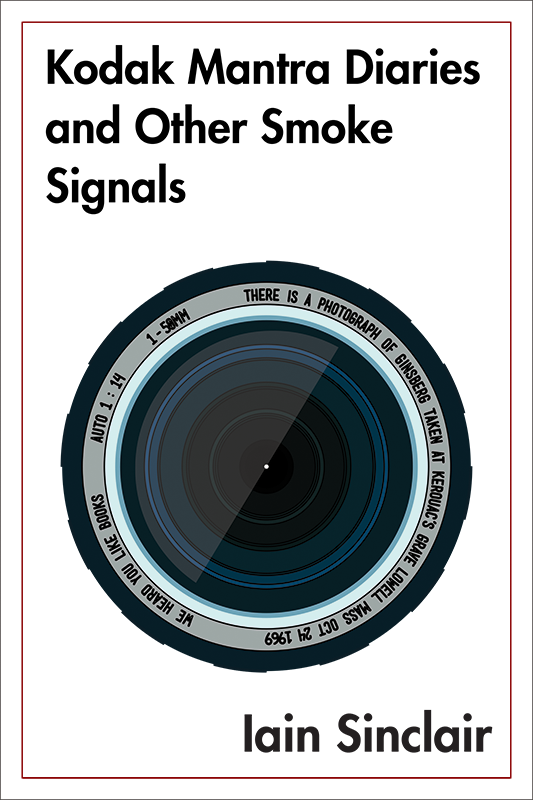 Kodak Mantra Diaries, Iain Sinclair’s cult record of his time with Allen Ginsberg in the London summer of The Congress on the Dialectics for the Demystification of Violence in 1967 – has just been given its first hardback edition by L.A. publisher We Heard You Like Books some 45 years after Iain first published it through his Albion Village Press. Interestingly the book also includes new texts continuing Sinclair’s fascination with the Beats. And having loved American Smoke, this alone makes it worth buying a second copy of this previously hard-to-find classic.

Here’s how We Heard You Like Books describe Kodak Mantra Diaries:

For two weeks in 1967, London’s Roundhouse hosted The Congress on the Dialectics for the Demystification of Violence, a counterculture happening showcasing R.D. Laing, Gregory Bateson, Emmett Grogan, Stokely Carmichael and Herbert Marcuse. The event’s acknowledged star was Allen Ginsberg.

As he pronounced to radical England, Ginsberg was followed by a young filmmaker with a commission from West German television to produce a documentary on the poet. That filmmaker’s name was Iain Sinclair.

Four years later, Sinclair gathered his notes and photographs of the experience and published Kodak Mantra Diaries on his own Albion Village Press. Wrestling with his brush with the poet and 1960s radical politics, Sinclair produced an astonishing prose debut, setting the template for his later works of non-fiction.

We Heard You Like Books is pleased to present the first hardcover edition of this little seen classic, accompanied by new texts which track Sinclair’s continuing fascination with the survivors of the Beat Generation, and record random encounters in the years that followed his initial engagement.We Heard You Like Books