Lost in Epping Forest in the Dark

“The spirit of devotion for the woods, which breathes through the simple expression of the poet [John Clare], is akin to “that hereditary spell of forests”, which Robert Louis Stevenson describes as acting “on the mind of man who still remembers and salutes the ancient refuge of his race.”

From the opening pages of London’s Forest by P.J.S Perceval published in 1909 which follows on from a quote by John Clare. He continues:

“Such a refuge once was London. Indeed she makes her first claim on history as a mere stockade in the woods – the Llyndin of the ancient Britons. Her wood and fen and heath, with the sweet country which once surrounded her, have disappeared, while a part only of the Essex Forest remains to recall the once great forest of the East Saxon Kingdom, which once had Lundentune for its port and ecclesiastical centre.”

To me Epping Forest is still a place of refuge, a haven from the pressures of urban life, a step through time. I headed out on Saturday, departing the tube at Woodford, then turning down Whitehall Lane by Bancroft’s School. Perceval writes how Bancroft’s was once the site of a poor-house. Its annual fees of £16,323 are more in the tradition of the mansion belonging to the Earl of Essex that had previously occupied the same land. The Earl wanting to be close to his supposed love Queen Elizabeth I when she used the hunting lodge on Chingford Plain. 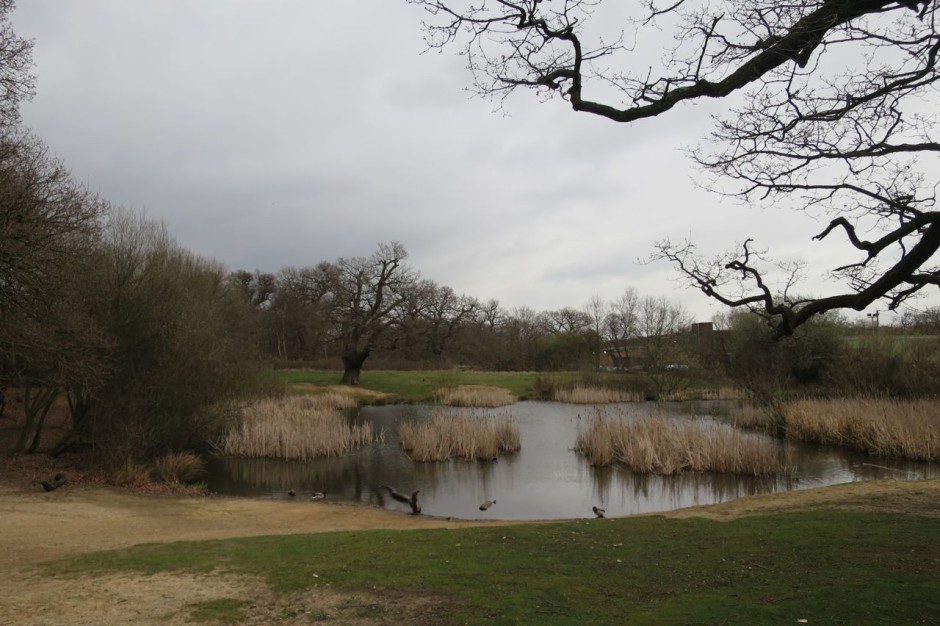 My wander took me past the Warren Pond and Queen Elizabeth’s Hunting Lodge. I reflected that this is often where my forest walks end, in the bar of the Premier Inn next door but today I wanted to walk on into sunset. I crossed Chingford Plain and took a path beside the road for a short distance before turning into the rump of the trees past bushcraft shelters dotted amongst the undergrowth. 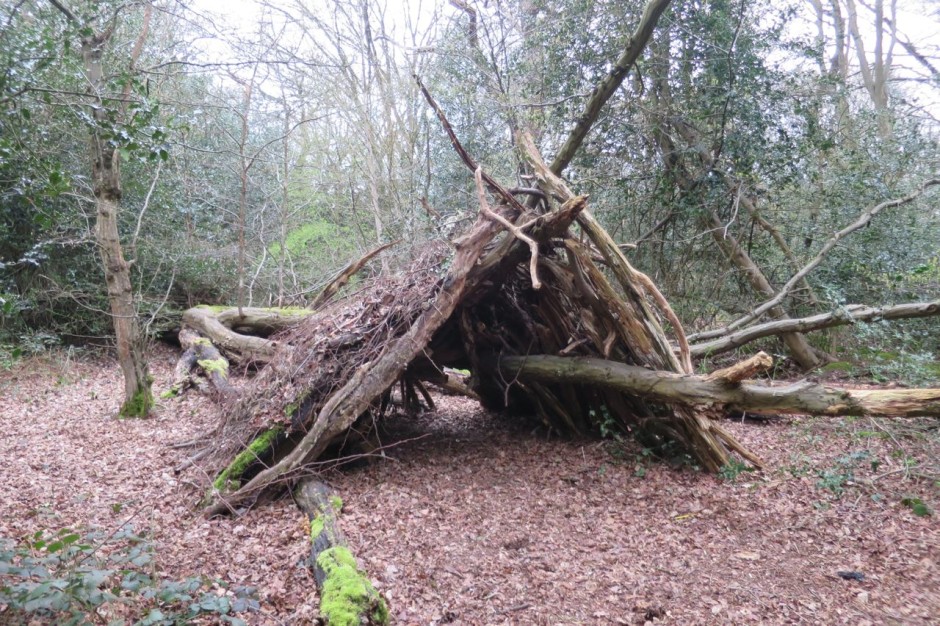 The light started to give out as I crossed the Cuckoo Brook so I consulted my map to pick a route towards an exit and a way home. I decided to walk East towards Loughton, a simple case of staying on the path I was on till I hit the road by The Warren.

I got caught up in the reverie of being alone in the woods while people bustled around going home from the shops, pubs filled up, and streets were abuzz with activity. Then I came upon a narrow lane in the darkness and looked for the way across to head down towards Loughton but the far side was blocked by hedgerows and fences. I followed the lane what I thought was south till finally becoming slightly concerned that I was going in the wrong direction. My map reading isn’t the best but surely I couldn’t have gone wrong on a straight path. I checked my compass then the map on my phone – both indicated that I was heading north towards High Beach, placing me between Springfield Farm and the Field Study Centre. Impossible I thought, how could that be? 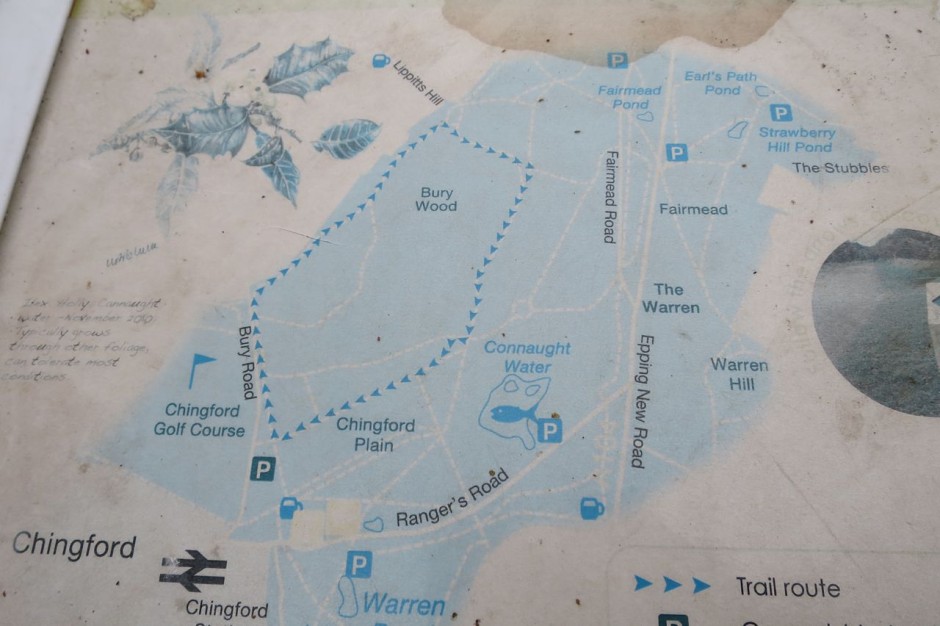 I decided to follow my nose and turned away from the road back into the now pitch black forest and walked for 15 minutes or so using instinct, enjoying the quiet of the night trees. Something splashed in a pool beside the path then was gone into the undergrowth. A pair of green eyes looked out at me from a clump of holly. I started to feel like an intruder – the animals that avoid human contact during daylight could reasonably expect to have the forest to themselves at night but here I was clomping along the gravel path disturbing their nocturnal activities. I stood still for a moment hoping to sense some wildlife moving around in the trees – but there was just silence. Beautiful silence.

I checked my phone once more and it indicated that I was heading North East. I put this down to lack of GPS coverage in the forest and returned to my cheap old-school compass. It too told me that I was walking in a northeastern direction. I decided to head South for Chingford, and hopefully pick up paths familiar enough to be recognised in the dark. My concern now wasn’t spending a few hours walking in circles in the forest at night (actually very pleasant) but finding myself having to make my way along dark country roads to a station at the mercy of speeding cars not anticipating a stray walker.

I still couldn’t make out any familiar features in the gloom but simply kept following the compass needle south enjoying the quiet of the evening. It made me think it would be nice to spend an entire night wandering the forest if you could manage to avoid the doggers, cottagers, and deep ditches (if people stuck to having woodland sex in the ditches that would help to avoid all hazards in one go).

Soon I recognised the section of path leading down from the Long Hills towards Magpie Hill and Connaught Water. The sign for the Cuckoo Trail marked the route that I assumed I’d taken an hour previously, highlighting just how far off trail I’d been. The trees parted and the sky opened up over Chingford Plain.

Settled with a pint of IPA and packet of Prawn Cocktail crisps in the Premier Inn next to the Hunting Lodge I studied my OS Map trying to work out how I’d managed to get my location so wrong. It boiled down to one simple error – that when I’d crossed the Cuckoo Brook and checked my map in the poor light I’d assumed I was on a different path – one that ran east – west, when in fact I was beyond Woodman’s Glade heading north through Bury Wood across Ludgate Plain towards Lippitts Hill. The loudness of the helicopters from the Police heliport should have been a clue.

But it proved once again, that even what starts out as a simple walk in the woods can turn into a minor adventure as long as you manage to get lost.

Discovering the London of Sherlock Holmes

The end of winter in Epping Forest