You never know where your feet will carry you – in this case aided by a W13 bus and riding it to the end at Woodford Wells. Passing The Horse and Well, an 18th Century coaching inn established 1730, I dipped down into Knighton Wood, once part of the grounds of the grand house belonging to Edward North Buxton (1860-1924), author the classic Epping Forest guide book that I take on all my forest walks. Buxton had lived for a period of time at Leytonstone House (along with various other members of the Buxton family). He spent much of his life campaigning to preserve Epping Forest at a time when it was threatened with development using his considerable influence through his family (who were also part of the Truman, Hanley, Buxton Brewing empire and Barclays Bank) and as MP for Walthamstow. 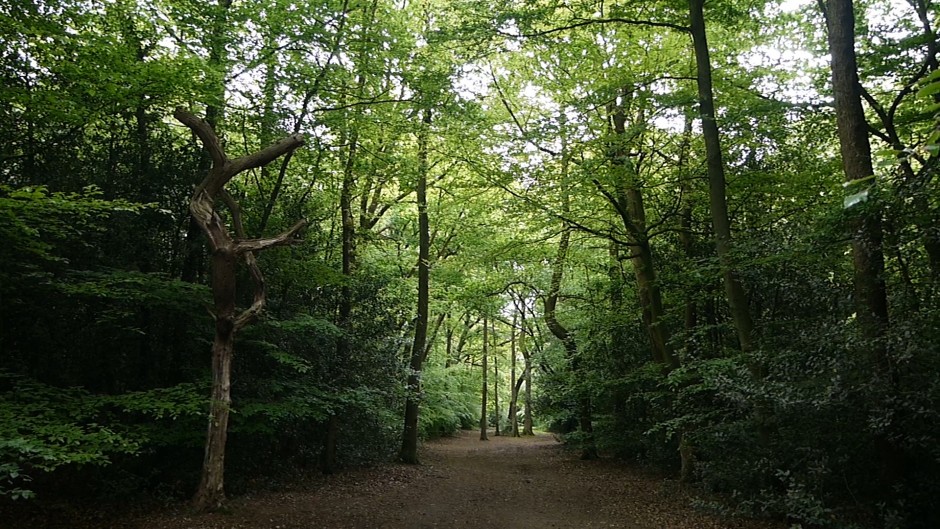 I can find no mention of Knighton Wood in Buxton’s Epping Forest, published in 1885, but he does mention Lord’s Bushes which forms part of this glorious area of woodland, “conspicuous for its picturesque oaks and beeches, and dense undergrowth of hollies …. an hour may be well spent in exploring its beautiful glades.”

I spent more than an hour exploring its ‘beautiful glades’, now enhanced by some of the surviving landscaping of Buxton’s home at Knighton House with resplendent rhododendrons in full bloom. There are also the ornamental lakes, wilder, more untamed than the ponds in Wanstead Park. I had pleasant chats with the dog walkers and at one point stood inside a hollowed out tree staring up at the sky the ambient sound being processed through mould, bark, and insect colonies to create an organic mix. I would love to mic that tree up, a giant arboreal ear. For a moment I had stepped out of the day-to-day urban life and was backpacking once more, the musty woody aroma, the embrace of the forest transporting me back to jungle trekking in Thailand, Sumatra, Sarawak. Such is the magic and enchantment of trees.