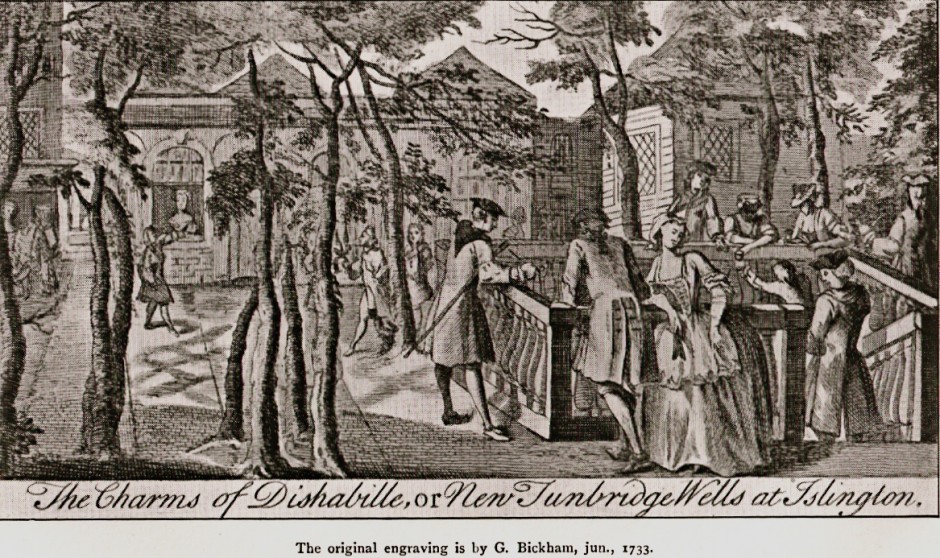 Met the brilliant Dave Binns the other week for a look at the Picturing Forgotten London exhibition at the London Metropolitan Archives. The mood was perfectly set by the walk up through the winding backstreets of Clerkenwell to the LMA by Spa Green Fields. After signing in at reception, then being directed to deposit our bags in a locker, we were free to go up to the exhibition with the instruction that all notes were to be made solely with a pencil and that our notebooks should be carried in a large transparent plastic bag (which was provided).

The exhibition starts on the staircase to the gallery – an ante-room to the main archive. The first image to grab my attention was an aerial photograph of Caledonian Market on Copenhagen Fields taken in 1930, a site I’ve been interested in for a number of years. It captures the full extent of the market grounds, some of which is now preserved as parkland along with the majestic clocktower.

In the gallery I was drawn to the glass display case dedicated to artist and writer Geoffrey Fletcher, presented as if containing holy relics. There was a photo of Fletcher sat on the ground sketching the Roman Temple of Mithras (recently relocated) along with a fine hardback edition of London Overlooked and a penguin paperback of The London Nobody Knows. A banner printed with a large photo of the Skylon at the 1951 Festival of Britain hangs nearby.

A collection of images show ‘The Devil’s Acre’, an area of poor housing just to the south of Westminster Abbey that was described by Charles Dickens in his magazine Household Words. A section on Housing includes an engraving from 1775 of The Norman Baynard’s Castle on a corner by the confluence of the Fleet and the Thames near a photo of a prefab on the back of a truck in 1962, and wooden cottages in East India Dock Road in 1860.

Layers upon layers of London are hanging on the walls at the Metropolitan Archives, whole other worlds within worlds. The exhibition runs until 31st October 2018 and is highly recommended.

From the Forest to the Lea – Loughton to Broxbourne

Walk along the River Lea from Rye House to Hertford

The abandoned City of London

Myths and Legends of London