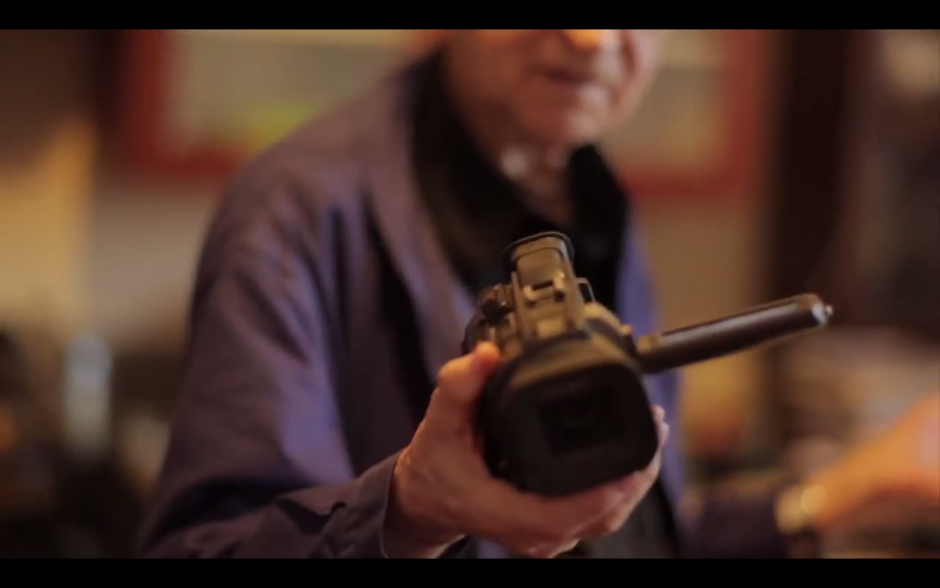 from Jonas Mekas – In Focus – The Artist’s Studio by MOCA

I’ve just launched a new blog of occasional writing on video culture, videography and film-making called Video Notes (the url is videographynotes because video notes was already taken). The first post explores how Jonas Mekas, ‘the godfather of the avant-garde’, could be seen as the original vlogger, and the parallels between the 1960’s experimental film scene in New York and contemporary online video culture. To be honest, I didn’t set out to write that post at all – I just wanted to explore the idea of diary films, but that is where the reading took me.

I’d had an awareness and interest in Jonas Mekas from my time working at the National Film Theatre (this was my film school). But it was when I was trying to work out what to do with the 4 hours of footage from the walks I did for my book This Other London that artist Bob and Roberta Smith suggested looking at Mekas’ work for inspiration. Although I wasn’t able to make anything from that footage (here’s one of the failed edits) – it did lead me down the path of studying YouTube vlogs more closely which then, via a meandering route, led to my ongoing series of Walking Vlogs that has been running for 3 and-a-half years now.

I shot a new ‘walking vlog’ yesterday – attempting to follow the footsteps of the characters from Patrick Keiller’s seminal film London – on their first walk, from Vauxhall to Strawberry Hill. I shot this in the style I make all my walking videos, on the hoof, talking to camera as I walk, grabbing quick hand-held cutaways as I go, placing the experience of the walk ahead of the necessities of film-making – a style that Iain Sinclair described as ‘grunge Keiller’ (back in 2005). Stylistically this is about as far away from Keiller’s studied locked off 35mm cinematography and beautifully crafted and delivered commentary as you can get. But it’s a style that works for me. Keiller had screened his early short films of London at the London Film-makers’ Co-op (Stonebridge Park and Norwood) – a further link between these worlds. It’s a pleasant surprise that this urge to write about online video making and culture (partly instigated by the brilliant Shane Dwason series on Jake Paul) has led me in this direction – back to some of my original film-making influences at the confluence of my interest in and study of London.

(there’s a further thread that takes in the films of John Smith, and the Paul Kelly/St Etienne Keiller-inspired films of London but I think that would be over-egging the pudding and I’ve already explored that in other posts – for example an article I wrote in 2006 for UEL’s Journal of East London Studies – Waves of Disappearance: cinematic topographies of the North Eastern frontier )