A walk along Section 11 of the London Loop from Uxbridge to Hayes and Harlington.

This was a glorious section of the London taking in the Grand Union Canal, River Colne, and Stockley Park on the route. One of my favourites so far. This western edge of the London Loop is characterised by watercourses – rivers, canals, lakes, and the industrial western fringe of London. It is classic edgelands territory.

This was an eventful walk. I was pelted with great lumps of hail and briefly lost my bearings where the River Colne feeds a series of fishing lakes. 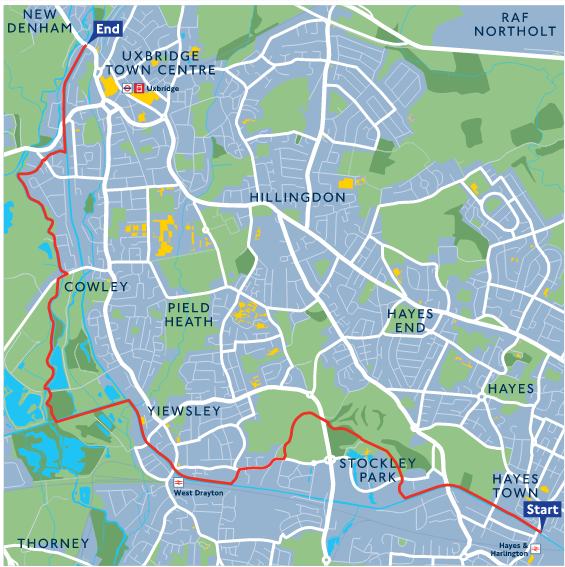 Then there was a curious a towpath encounter with a guy in shades at the junction of the canals near West Drayton who told me how the barges were once used for drug dealing (in the 1980’s), stashes in the bushes, even underwater, old Hippies making a few quid and serious criminals with connections at Heathrow. It’s all changed now, he tells me, but “it was a war zone down here 30 years ago”, he says as his parting shot. Walking on, not more than 100 yards, three skinny pale furtive blokes hunched under a bridge over the towpath – doing business. They shoot me a furtive look. Is this what prompted the man in shades to stop me – a warning of what was ahead?

The other side of West Drayton, at Stockley Park is a Black Mirror Techno World presaged by a large Tesla dealership. Eerily silent on a Sunday afternoon as early evening light broke through the leaden clouds.

The London Loop always seems to deliver – looking forward to the sections ahead.