Back in February I met some of the residents on Northwold Estate in Hackney to hear about their concerns over the Guinness Trust’s plans to demolish one third of the Estate to build private luxury flats in the place of socially rented family homes.
Follow Save Northwold on Twitter
Love Northwold Homes on Facebook

A small group of people gathered together on the steps of St. Paul’s Cathedral merging in with the crowds of tourists and sightseers. As I spoke to them on camera a bride passed by shadowed by her bridesmaids, the smartly dressed wedding crowd soon filled one half of the step behind. From a distance you would not have distinguished them from the general Saturday throng. They looked in many ways unremarkable, a reunion of sorts, of mostly middle-aged gentle-looking folk. But for them this wasn’t any Saturday – they were here to remember the day 5 years ago when they were part of the 3000 strong meeting of activists that started Occupy London (Occupy LSX). Some of them turned up that Saturday 15 October 2011 and didn’t leave until the camp was evicted in February 2012. 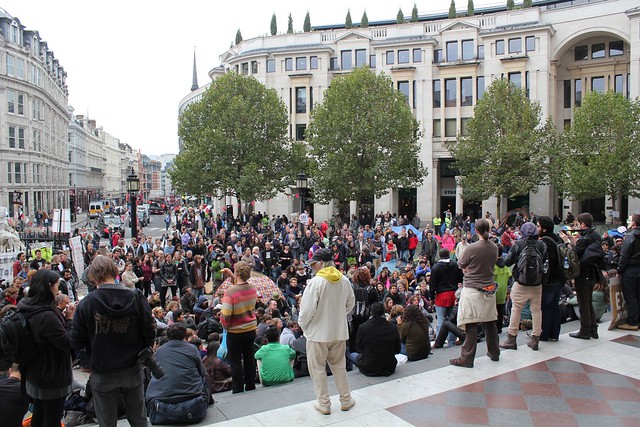 Listening to their testimony it really hits home what a momentous day it was in the social history of London. A mass challenge to the power of the City of London by the citizenry who occupied one of it most important and symbolic sites. I attended on the second day and shot a short video – I had never seen anything like it, here was politics being done in a whole new way. There were no established groups, no leaders, listening to the discussions there was seemingly no ideology simply, as Tina puts, it that people had reached the point of ‘Enough’. 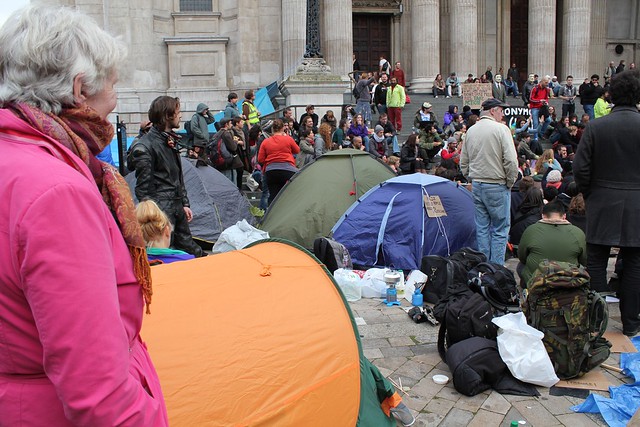 As Jamie says in the interview above, many of the people who came to Occupy had never been involved in politics or activism before, many have been involved ever since. Tina now dedicates herself to activism full-time. Jamie is a regular fixture at actions around London. 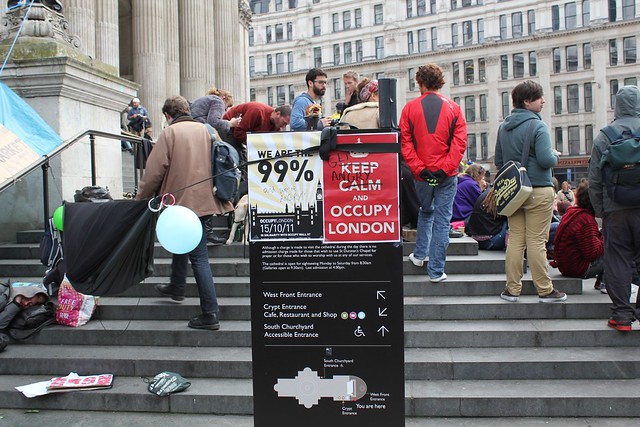 After the camp was broken up the London Stock Exchange itself admitted that the Occupiers had been right – the City and the banks had become too powerful and needed proper regulation. The rhetoric thrashed out at those first General Assemblies on October 2011 have become part of everyday vocabulary

“The current system is unsustainable. It is undemocratic and unjust. We need alternatives; this is where we work towards them.”

“We want regulators to be genuinely independent of the industries they regulate.”

“We demand an end to global tax injustice and our democracy representing corporations instead of the people.”

These are sentiments that could come from the mouths of almost any politician today (even if they didn’t believe it they understand this is what people want to hear).

The Occupiers who’d come together on Saturday were enjoying sharing their memories of the camp – the didgeridoo at 4am, the kindness of strangers who brought food and money, the homeless City workers who joined the camp then went to work in the very banks being discussed, sleeping on that cold pavement through snow and rain, Christmas and New Year. Something powerful happened on October 15th 2011 that I think will take some time yet to fully understand, but I think, I hope a corner was turned in the quest for a better, more just world.

Battle of Cable Street 80 Years On

Fantastic uplifting scenes yesterday at the march and rally to mark the 80th anniversary of the Battle of Cable Street when the people of the East End poured onto the streets to stop Oswald Mosley’s fascist Blackshirts marching through the Jewish East End on 4th October 1936. As Jeremy Corbyn pointed out in his speech, it marked an important turning point in the fight against fascism in Europe in the 1930’s – Mosley had strong support among the British Establishment and had gained the sympathy from powerful right-wing newspapers (you can probably guess which). ‘The Battle’ that took place in 1936 was between the Metropolitan Police and the public defending the East End Streets – the Met there to protect Mosley’s British Union of Fascists. A Police Liaison Officer I spoke to in the march joked about how a he’d have received a very different reception from the crowd in 1936. He’d have been baton charging them on a horse most likely.

80 Years on and this was not a day of conflict but of celebration, a day to remember an important moment of unity and reflect on the lessons we still need to learn today. Nearly everyone I spoke to in the video above stressed that echoes of the rhetoric of division and hatred from the 1930’s were rearing their heads again. Racially motivated attacks in post-Brexit Britain are on the rise. Our tabloids spread fear and hatred of refugees.

The Great Yiddish Parade band soundtracked the day with interjections from a vocal anti-fascist section who chanted slogans in Italian and lit the way with multi-coloured flares. Banner of the event for me was the Woodcraft Folk – satin green hoisted on heavy-looking wooden poles and catching the wind blowing down Commercial Road. I was told how the Woodcraft Folk had lined up alongside the rainbow coalition of Jewish, Anarchist, Communist, Irish, and Trade Unionist groups who turned out on that day in 1936.

I also spoke with a friend of Altab Ali – the young Bangladeshi man stabbed to death by racists in 1978. The park where he was murdered today bears his name and was the mustering point for the march.

Cable Street 1936 is a powerful resonator in the history of London and events such as those yesterday remind us of the power of unity and community that we must never forget.

Protestors gathered this morning outside the Queen Elizabeth II Conference Centre in Westminster for the publication of the Chilcot Report into the Iraq War. 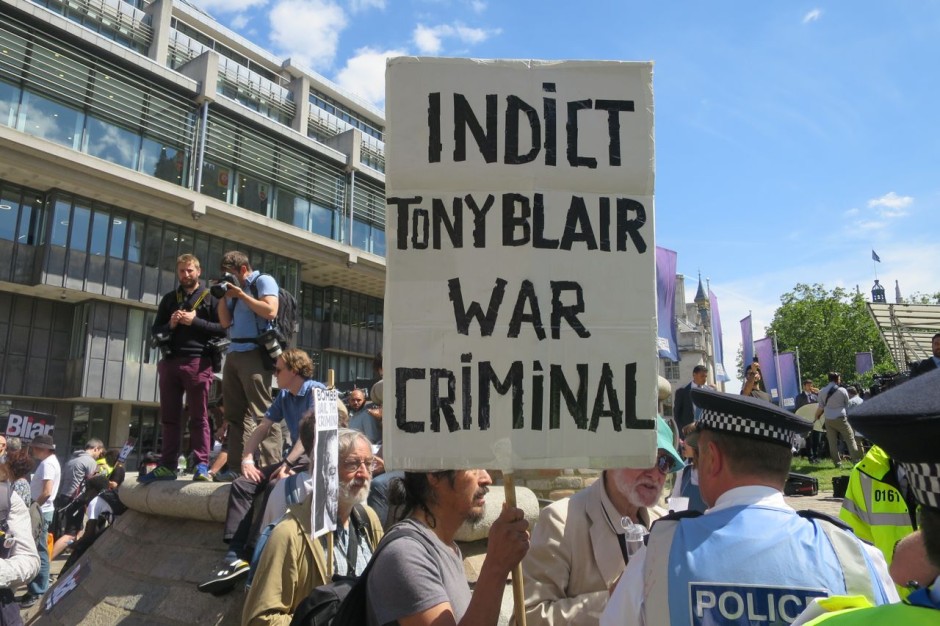 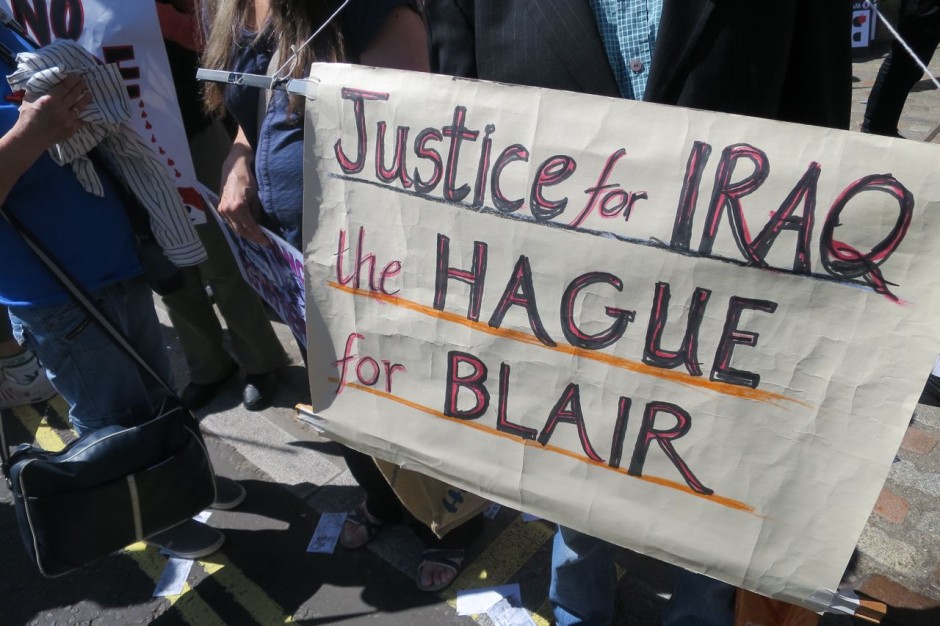 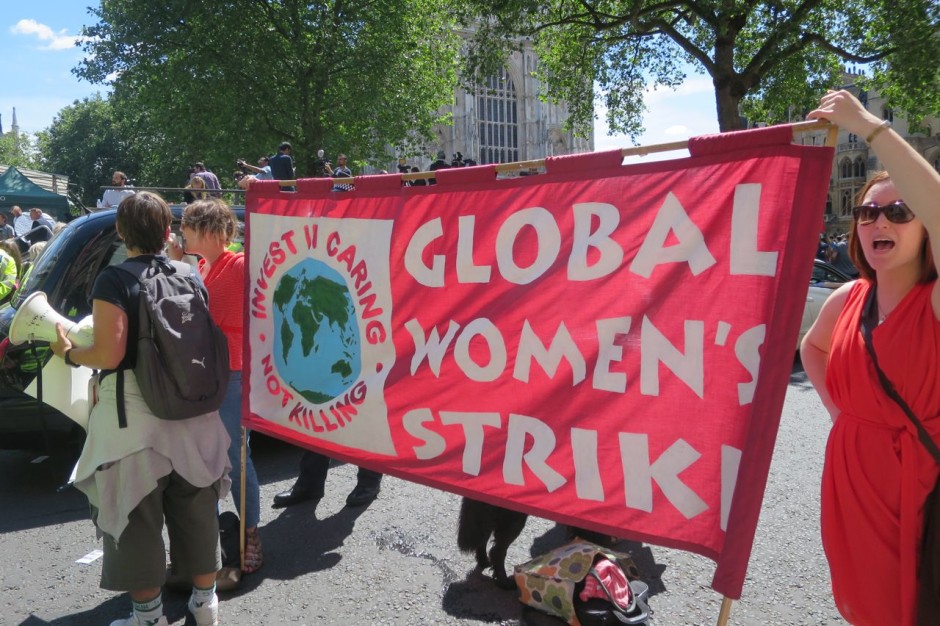 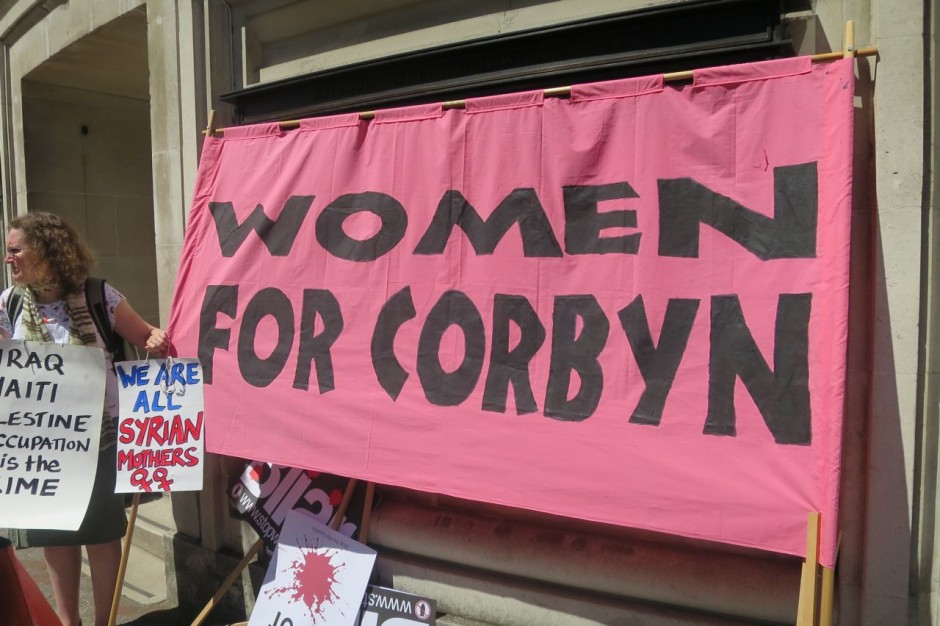 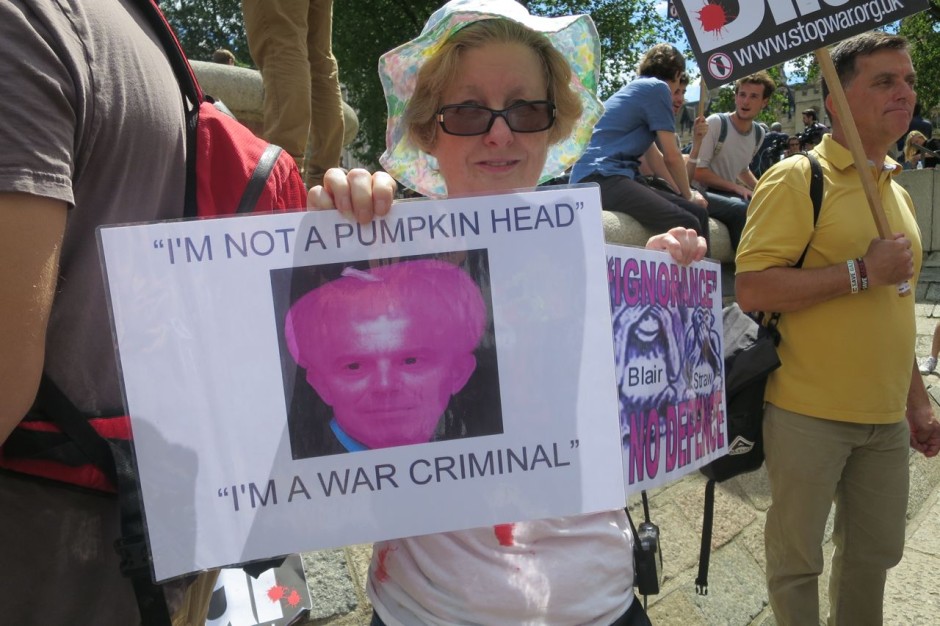 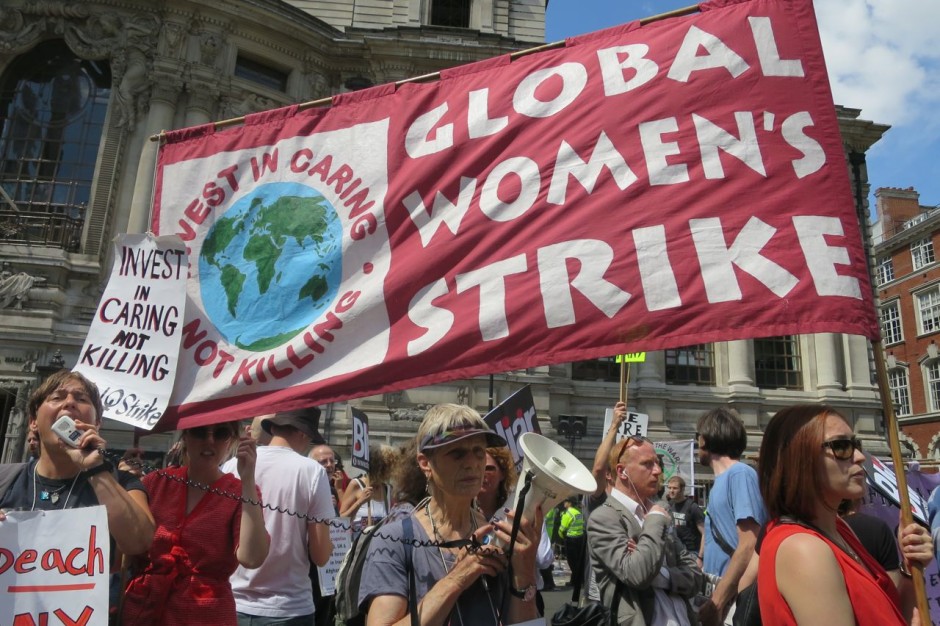 I spoke to Carole Vincent who I often see around the streets of Leytonstone. Carole hoped that David Kelly’s name would be raised today – the UN weapons inspector who many believed was murdered for his questioning of the government’s claim that Iraq possessed Weapons of Mass Destruction. 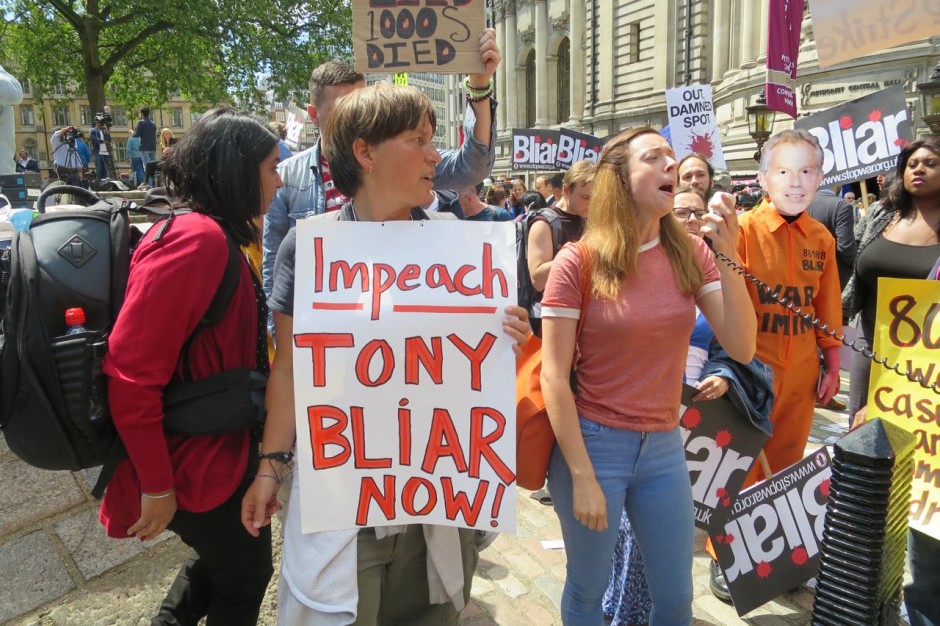 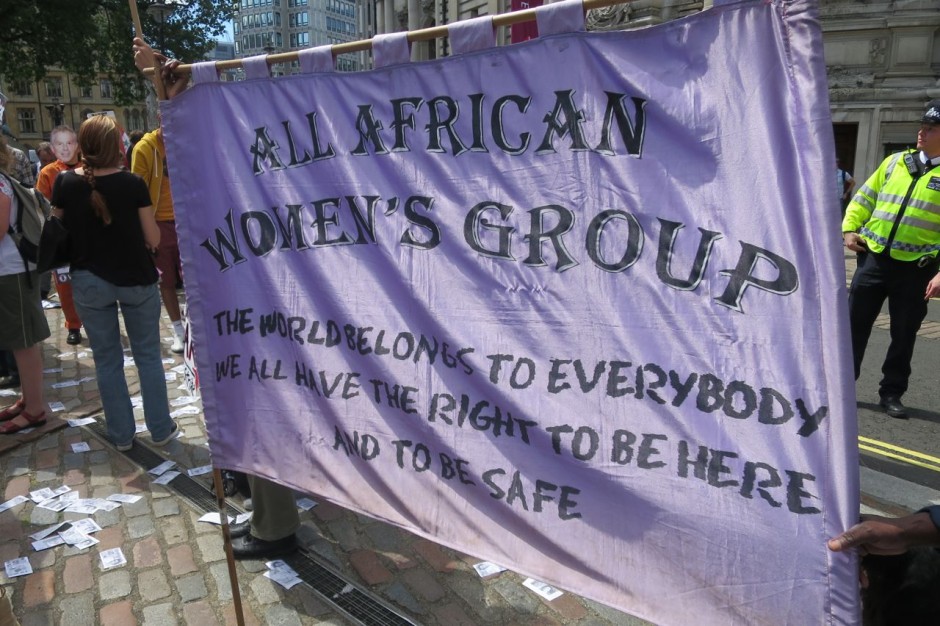 There was also a young British-Iraqi student visibly upset when talking of the destruction wrought upon her homeland, violence that continues to this day with 250 Iraqis killed in a bombing on Sunday. 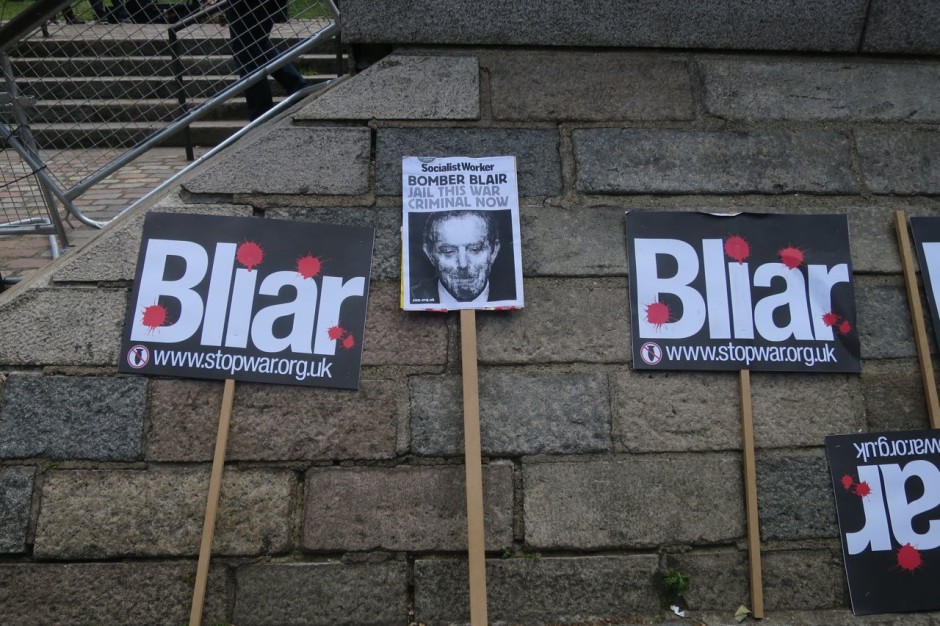 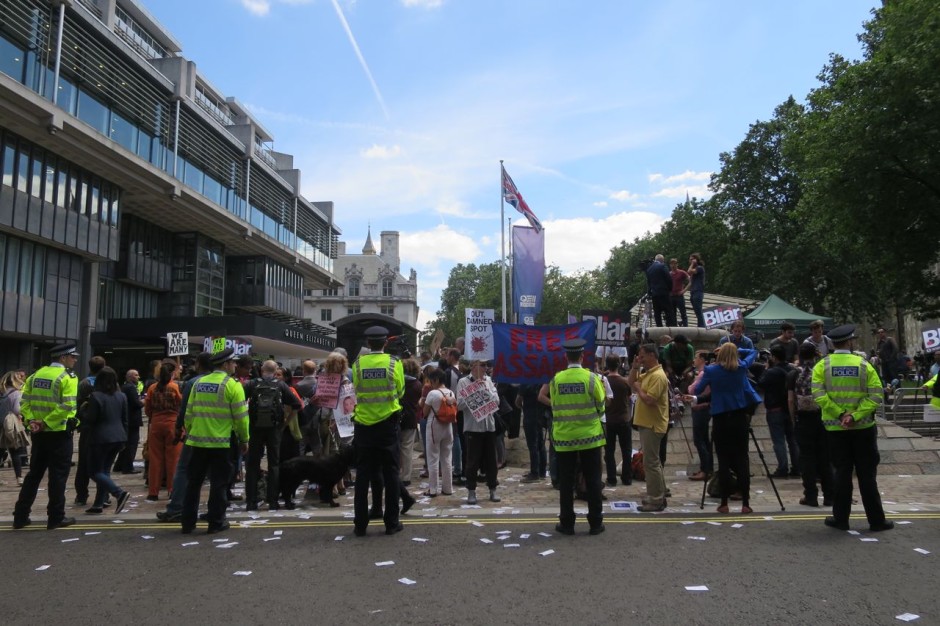 The chant of the day was for Tony Blair to be prosecuted for war crimes – or at the very least to be impeached an stripped of his privileges as a former Prime Minister. As I walked around to Parliament Square I saw relatives of soldiers killed in the Iraq War in tears. It was a day of sadness and anger in Westminster – let’s hope it leads towards some form of justice.

The campaign to Save George Tomlinson School

On Monday a delegation of pupils from George Tomlinson School in Leytonstone gathered outside the school gates to deliver our petition to the Town Hall in Walthamstow. In a matter of weeks over 4000 people signed a petition both online and on paper, calling for the Lime Academy Trust to be removed from the school and a non-Academy aligned Headteacher appointed. It now looks as though our campaign has been successful with a new Headteacher and Senior Leadership Team to be appointed soon.

This is a video I made at the start of the campaign that highlights the central issues.

It’s important to note though that when I asked the Portfolio leader for Children and Young People at Waltham Forest Council, Cllr Grace Williams, to back a call against all future academisation in the Borough, as neighbouring Labour-led Redbridge has done, she merely said it was the Council’s policy to allow Governing Bodies to decide what is best for their school.

The battle for the future of George Tomlinson could be just the latest of others to come in Waltham Forest.

Euro Art Happening on the beach at Ramsgate

The other Sunday I took a ride down to Ramsgate to film Bob and Roberta Smith’s EU Referendum inspired art happening on the beach in Ramsgate. Bob installed a large painting on legs in the channel with France behind in the distance – the work baring the statement WE HAVE ONLY GOT EACH OTHER – a phrase used by Bob’s 92-year old mother when they discussed the forthcoming referendum on EU membership.

Save Empress Place in Earls Court from demolition

The other week Earls Court Area Action Group laid on a colourful Victorian themed to protest against the planned destruction of Empress Place and two adjacent pubs. Thankfully the Prince of Wales pub has been given ACV listing which should give it some protection but the architecturally and culturally important street of terraced housing in Empress Place is under serious threat. I went along with my camera to make a record of events and help spread the word.