Along the Silt Road from Eden 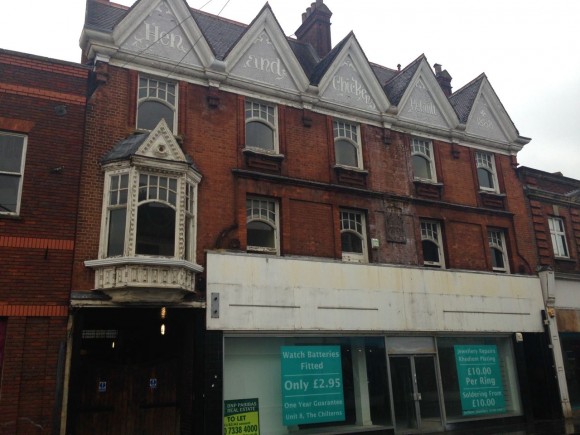 Wycombe on a wet half-term Monday. I’m here for a lunchtime concert at All Saints Church of music by poet and composer Ivor Gurney by Jacobine van Laar and Marisa Thornton Wood. I’ve been mildly obsessed with Gurney since I discovered his connection with the town during the Remapping High Wycombe project – not just that this fascinating overlooked cultural figure had lived and written some of his most haunting compositions in Wycombe either side of the First World War, but that he was inspired by his long walks, manic fugues from London to Gloucester and the walk I plan to recreate from Wycombe to Gloucester which he did over two days in late February 1920. I’d tentatively planned to carry out the walk on the anniversary but lack of planning and my inability to cover the 60-odd miles in two short February days meant  postponing till summer. 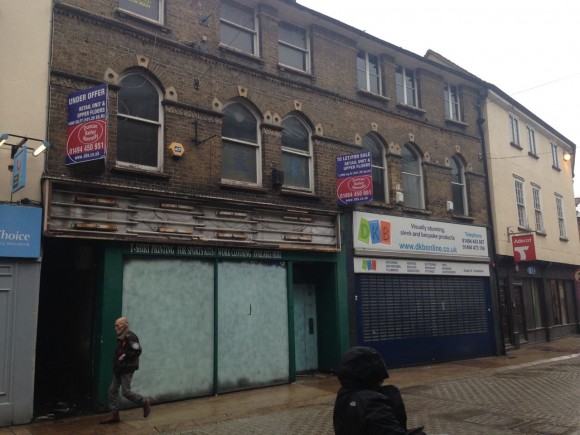 I killed some time wandering familiar childhood streets, devastated by the building of the Eden Shopping Centre – a place that must win the award for most misnamed location ever, perhaps they were playing opposites day in the planning office. We’d feared this when doing our project in response to the redevelopment over 2004-05 but to see it first-hand was depressing. The once thriving High Street dead, Poundland, Iceland, charity shops. The Octagon Centre – the town’s original shopping mall now relegated to the back door of the new scheme with empty units and a few bedraggled shoppers sheltering from the rain. White Hart Street shops boarded up, vacant, the same pattern creeping like a weeping rash round Oxford Street to Frogmore. The Kebab Centre has somehow survived the retail blitz but little else. The guts totally ripped out the town by a covered mall with a particularly big Marks and Spencer, a muffin shop and bowling alley. 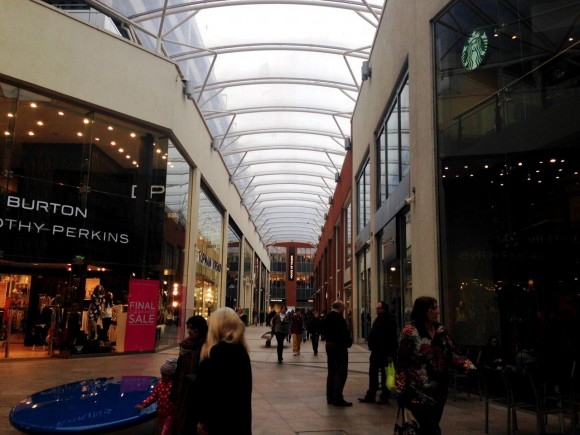 In the new Waterstones I picked up a copy of a book I’d seen reviewed a while back and placed on my To Read list purely on the basis that it was the story of a man’s relationship with a stream somewhere in England. At the cashdesk I opened the cover to find that the subject of Charles Rangeley-Wilson’s Silt Road wasn’t just any stream anywhere but the river that ran through Wycombe (pretty much under the Waterstones in fact) and along the valley floor through the village where I grew up – the sacred River Wye that gave its name to the town and the road where I spent my formative years. The river that drove the mills along its course from West Wycombe to Bourne End. Near its banks was a holy well, a site of pilgrimage. Romans seeded oyster beds in its clear spring waters. I used to paddle in it as a kid and we rode inner-tubes over the weirs by the viaduct. I’ve played Poo Sticks with my children from the bridges that cross the river where it skirts the perimeter of Wooburn Park. 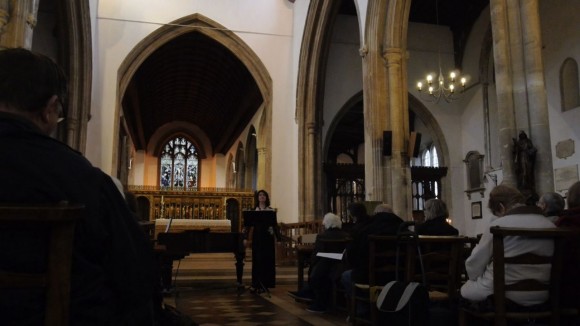 After Jacobine and Marisa’s haunting Gurney recital I set out along the stream in the driving rain. I’d left home in my trainers for some reason, well my boots were still caked in mud from my schlep across Gilbert’s Slade the day before and I didn’t want to wear muddy boots to the recital. Pretty soon my trainers were soaked through and several balletic slides in the mire crossing the Rye coated my feet in thick mud. 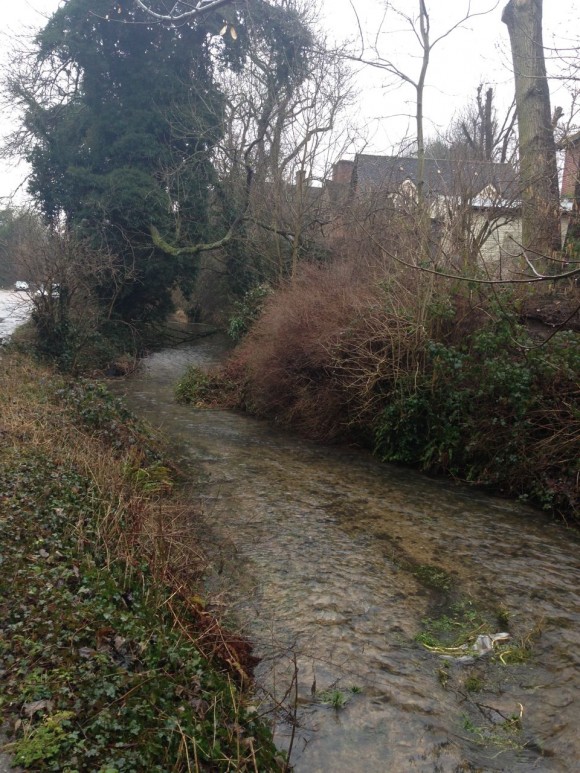 The rain would ease up, I was sure. I’d been sent Silt Road as a gift from the book genie and a message to make this pilgrimage. By the time I reached Kingsmead the rain was coming down in thick watery rods smashing me across the head and shoulders. I remembered my Nan’s saying that Dad had told me on the phone just the other day, ‘February fills the ditch, black or white I don’t care which’. My Nan would have been chuffed to bits – the ditch was full to the brim. 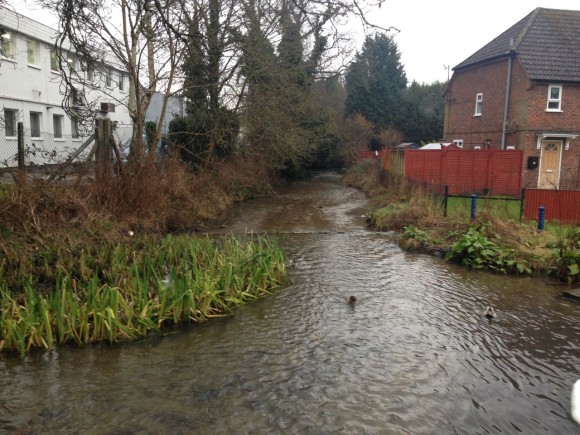 I skated across the swamp-like rugby pitches heading for shelter on the far side only to get there and discover it had been built by someone with an odd sense of humour – the sunken floor filling up with rainwater like a fish pond.
It couldn’t be any grimmer or greyer as I approached the viaduct at Loudwater – unrelenting hometime traffic kicking up plumes of water. I started to regret embarking on this river walk – it’s not as if I haven’t done it hundreds of times before. I pass into Wooburn, past the street where I grew up – Wye Road. A number 37 bus pulls up at the bus stop bound for Wycombe and the train back to London – too much to resist. 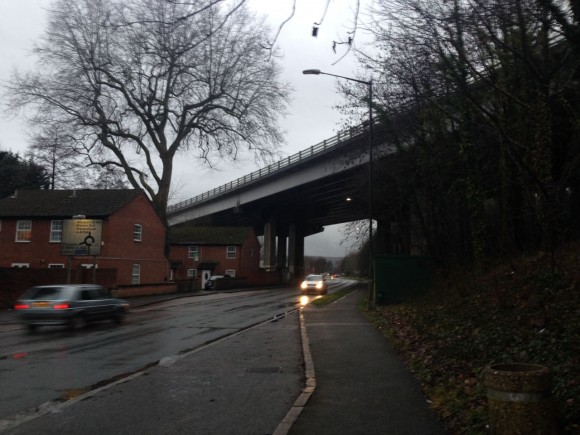 On the turbo powered train into Marylebone I open Silt Road. What on earth compelled this award-winning nature writer to pen an entire book about a short stream running through an industrialized valley on the outskirts of High Wycombe?

The book opens under the grey M40 viaduct at Loudwater with a two-page monochrome photo, “Standing under the motorway along which the cars and trucks drummed and rushed and from which the rain spilt in a streaking line, I felt a fascinated longing for this imprisoned stream. And now I feel this stream running through me.”