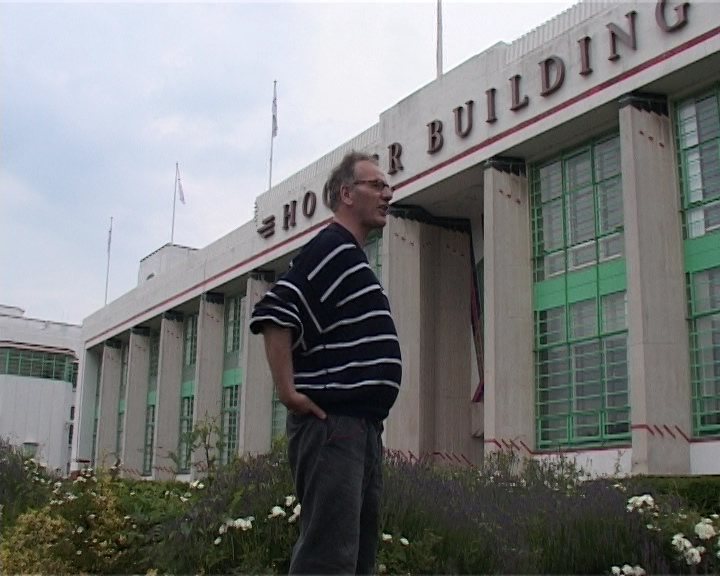 The Lockdown has caused me to excavate the rushes I shot in 2008 for my documentary about Nick Papadimitriou, The London Perambulator. It almost feels like an act of ‘Deep Topography’, diving into what Nick describes as ‘storage vats of regional memory’. Here the storage vats are hard-drives of footage shot on a series of walks through Nick’s territory around West and Northwest London – Finchley, Stonebridge Park, Perivale, Feltham, Wormwood Scrubs. 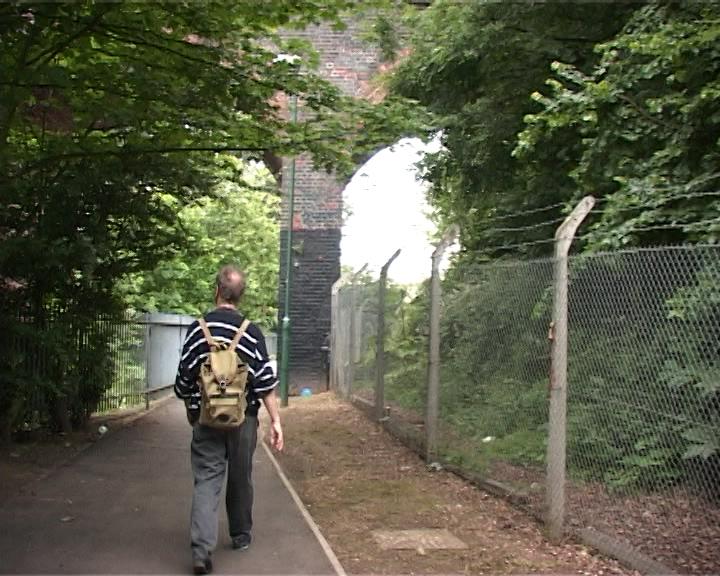 walk from Stonebridge Park to Perivale

It’s been a strangely comforting and therapeutic experience. It could be the memories of a simpler time, before ‘the virus’. Also a period when I was very much learning how to make a documentary (a process that never ends). There’s the nostalgic aesthetic of Standard Definition video tape as opposed to Ultra High Definition (4K) video clips recorded on a SD card, the camera running as it roves across the landscape looking for a subject to settle on. There’s some good stuff in those out-takes that didn’t make the final cut that premiered in the East End Film Festival at The Whitechapel Gallery in April 2009. 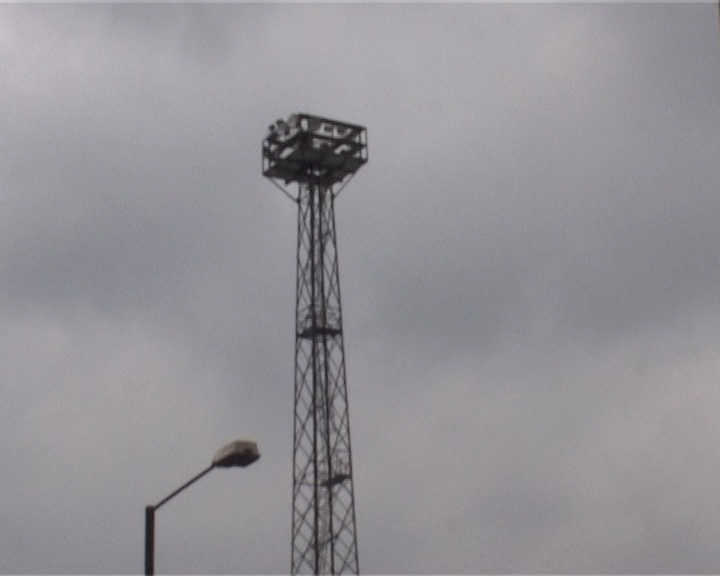 Even though I have more pressing concerns in these troubled times, I can’t help spooling through another clip when I sit down at my computer, finding gems I’d forgotten about, such as Nick talking about a planned prose sequence called ‘In Praise of Industrial Middlesex’. This was shot while we walked through a Wembley Industrial Estate, a place we’ve returned to at least twice since for subsequent projects. 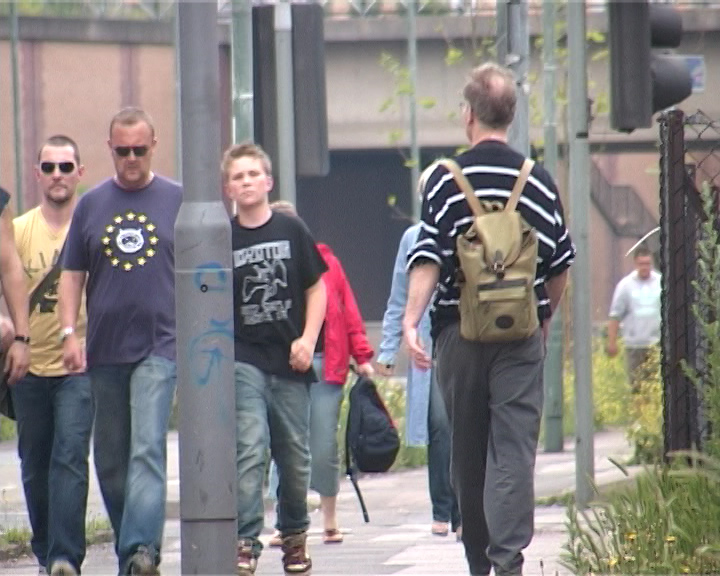 And there’s the murky December day we went to the former site of Ashford Remand Centre, now HMP Bronzefield named after the Bronze Age settlement that was discovered during the building of the state of the art prison. Small references that got lost in the construction of a broader narrative. 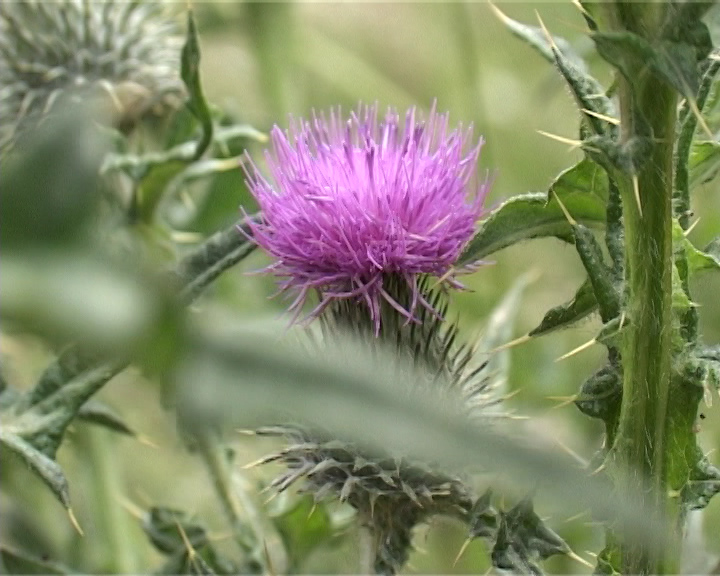 I still don’t know what I’m going to make from these clips – I’m enjoying the process of rediscovery too much to impose a framework around it. The initial film was given form by three ‘expert’ interviews with Iain Sinclair, Will Self, and Russell Brand, talking about Nick and his practice. I’m tempted now to  just let the footage speaks for itself without explanation. 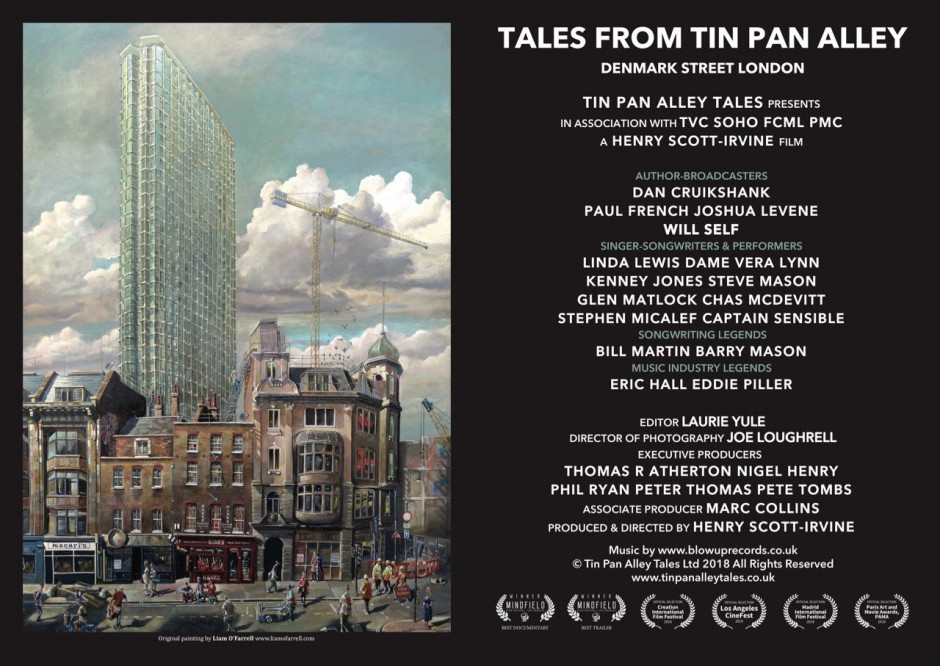 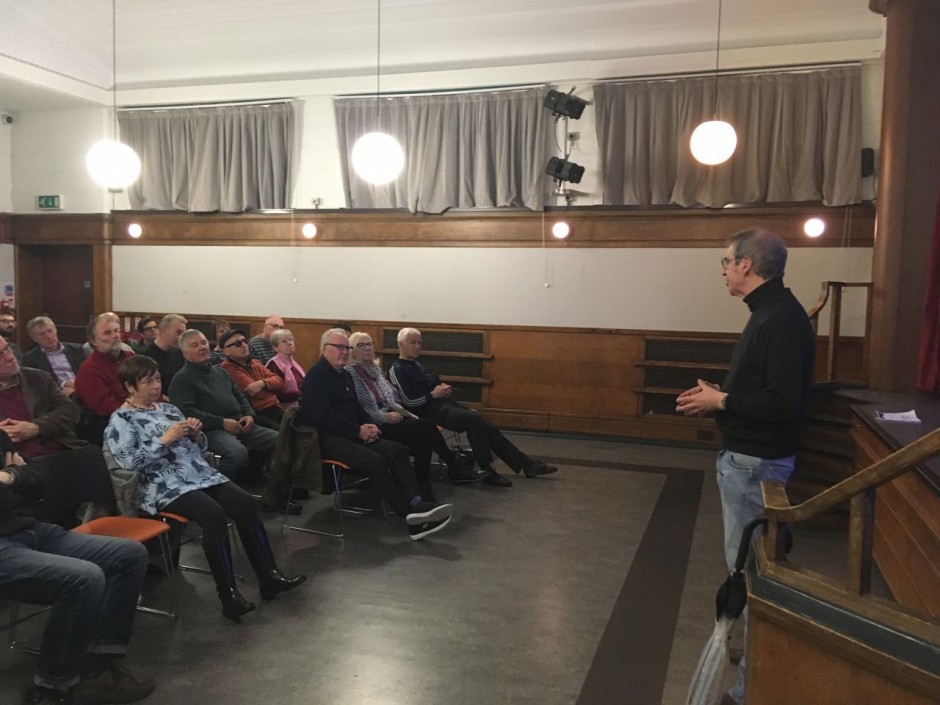 I first met Henry in the alley behind the 12 Bar Club on Denmark St while it was being occupied by musicians and protestors following its closure. I made a couple of videos about the campaigns to save live music venues in Soho and Denmark Street, some of the footage appears in Henry’s film. Tales from Tin Pan Alley, is far more than a protest film. It’s a documentary that tells the stories of the street of music from its Georgian heritage (with Dan Cruickshank) to its brief period as London’s ‘Little Tokyo’, to the place that gave us the pop charts. It’s an incredible story, brilliantly told in this absorbing and essential documentary. 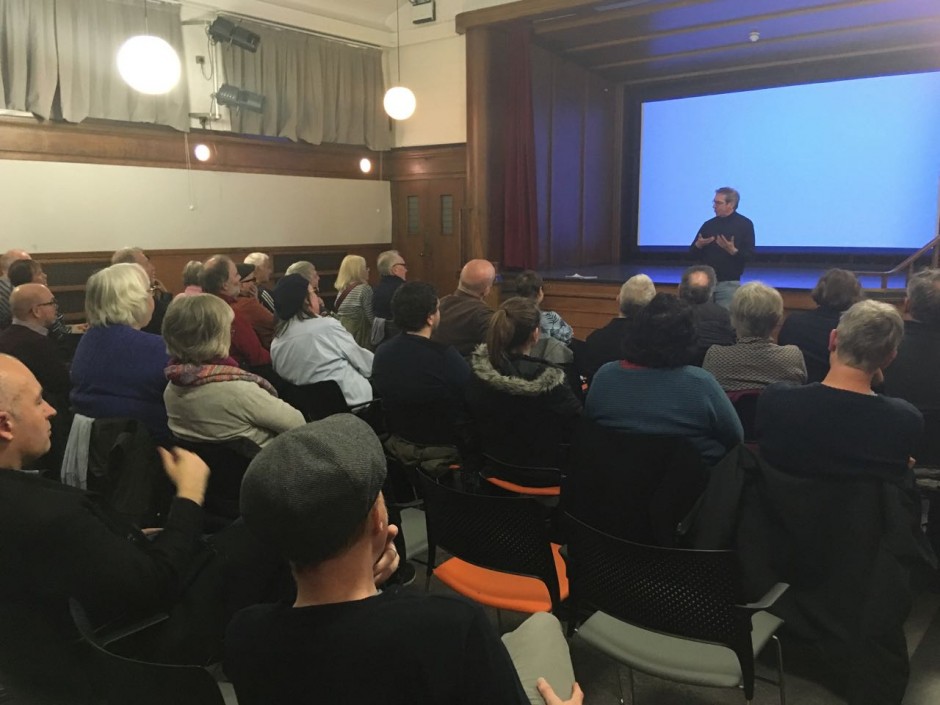 In the Q&A afterwards, Henry passionately told the audience about the campaign to save Denmark Street’s music heritage. We were also joined by Jimmy Winston, one of the founder members of the Small Faces (formed in East Ham) who told me about coming to Leytonstone as a youth to look at the guitars in Friedman’s Guitar Shop on Leytonstone High Road. It was a memorable evening.

“The true ‘unsung heroes’ of Tin Pan Alley are the musicians, the songwriters, the music publishers, the technicians and the people from behind-the-scenes who have come out of the woodwork, out of history and out of retirement to approach us. Individuals that would be very hard to find in any other circumstance have come forward from across the globe, saying, ‘We want to be in this special documentary film!’

We have them here now. This is their story – a contemporary urban Canterbury Tale – a vital testament from over 30 musicians, broadcasters and historians.

The legacy of those who worked in the street is our testament to Denmark Street’s unique place in international cultural history.

The struggle for those remaining, continues …”

The film follows Sinclair reprising the walk over the course of a year rather than the day’s walk of the book. Iain is once again joined by Kötting in parts, along with Chris Petit (director of Radio On) and Bill Parry-Davies on the 35-mile circular yomp.

London Overground charts Sinclair walking through this changing landscape from his home in Hackney, through Shoreditch down to Wapping where he revisits his earlier book Downriver. In the company of Andrew Kötting once more they ramble in both senses from the Thames foreshore at Rotherhithe through Canada Water, Surrey Quays to Queens Road Peckham. At Willesden Junction he is joined by film-maker and author Chris Petit as they survey the developments around Old Oak Common. Sinclair and Kötting walk through the night to reprise their original yomp in reverse. Dalston is surveyed with local campaigner Bill Parry-Davies logging what has been lost in the rampant redevelopment and checking in on cherished corners of the area. We meet noir novelist Cathi Unsworth at Shepherds Bush/Westfield and artist Marcia Farquhar in Kentish Town.

What emerges from the film is a snapshot of the city in transition and also a unique insight into the most important chronicler of contemporary Londoner. ‘The city’ Sinclair says at one point, ‘is a series of psychic mappings that reinforce our own identity’.

London Overground premiered at the East End Film Festival with a screening at the Rio Cinema, Dalston – 2nd July 2016

In the Shadow of the Shard – premiere

Here’s a selection of images and reactions from Twitter taken at the premiere of my new film In the Shadow of the Shard, made with community activists and organisers in Bermondsey and Rotherhithe. The screening at the magnificient Magdalen Hall, organised by Leathermarket JMB, was followed by a lively panel discussion that included local MP Neil Coyle and Southwark’s Chair of Housing, Johnson Situ, alongside members of the community. There was a really honest and open exchange of views. Details of further screenings below. 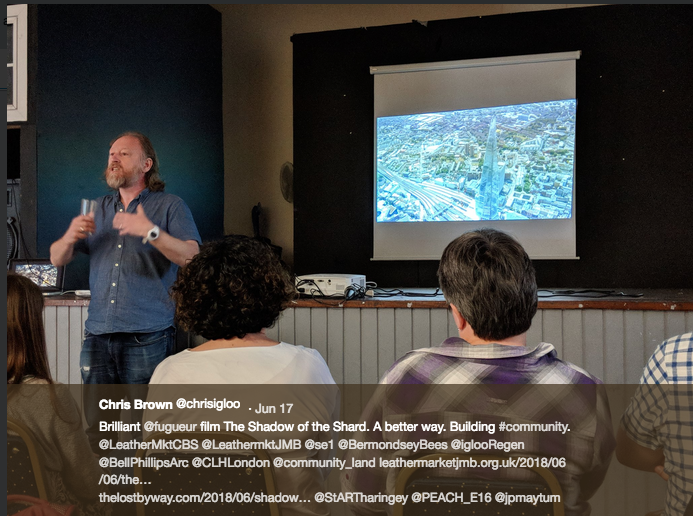 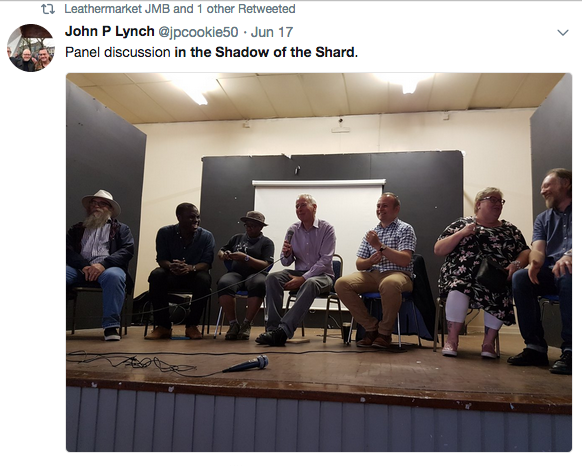 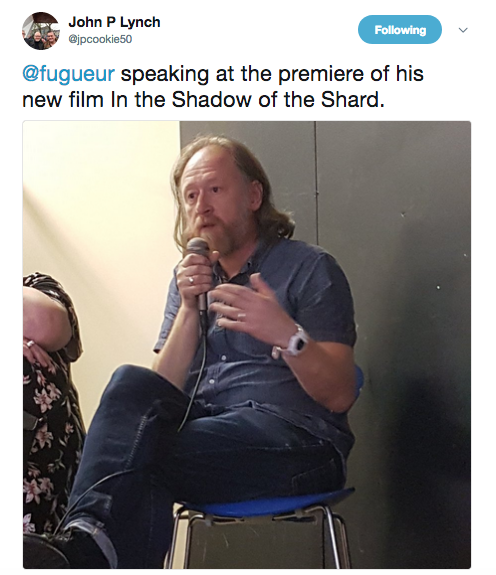 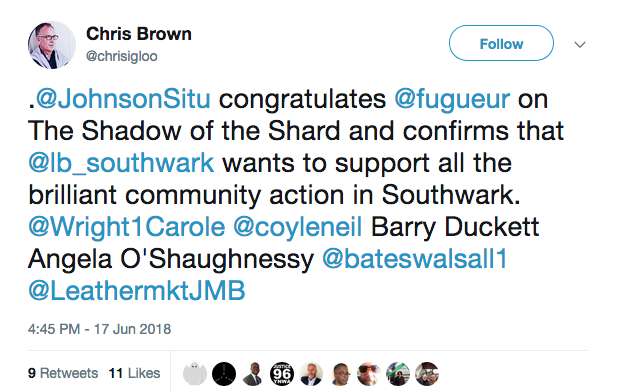 In the Shadow of the Shard – documentary screenings 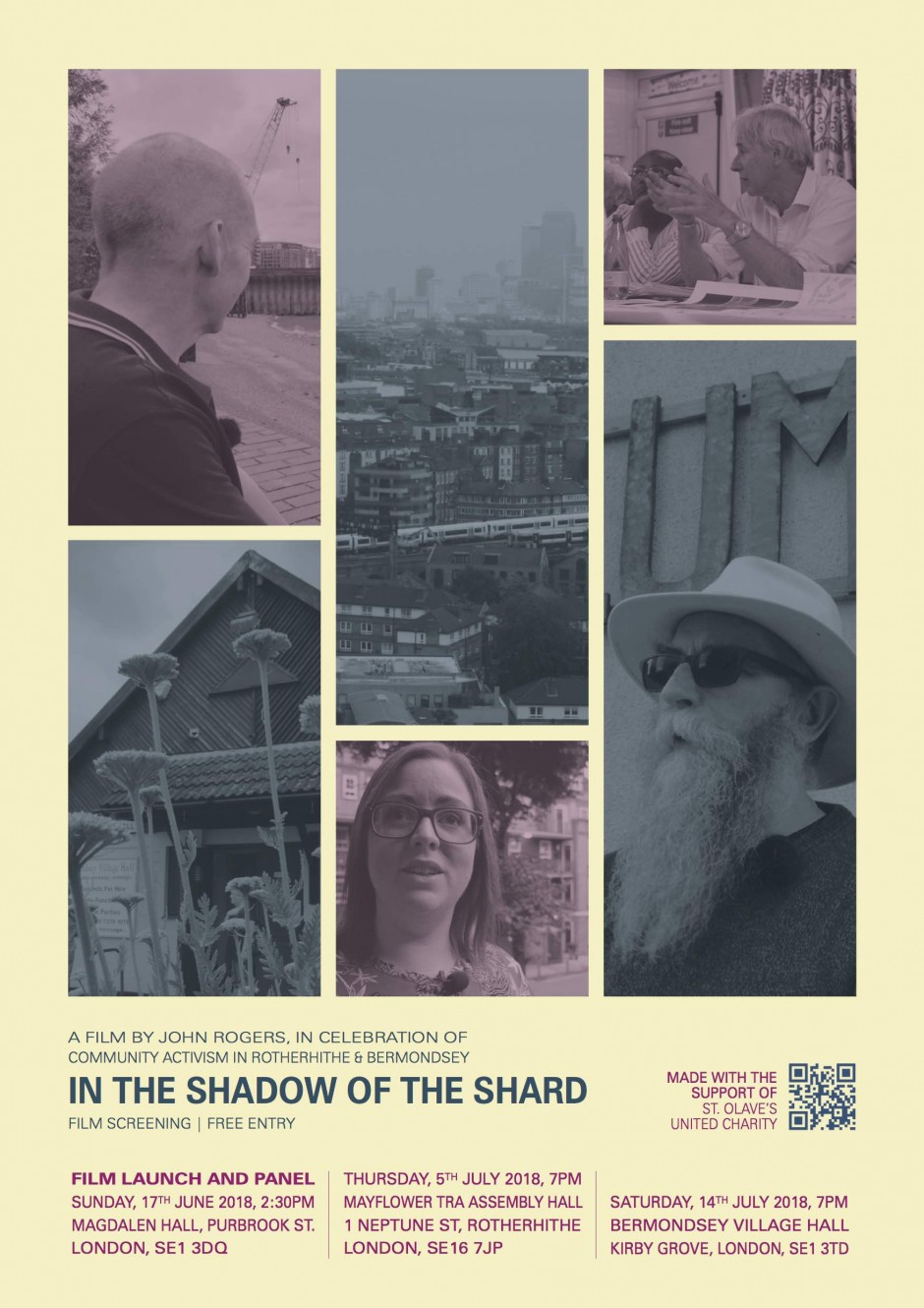 This Sunday sees the premiere of the documentary I’ve been working on with tenants and residents in Bermondsey and Rotherhithe over the last year. The film grew out of my interest in Leathermarket TMO building a block of new 100% Council flats on the Kipling Estate, right in the shadow of the Shard. In the context of the London housing crisis, this was an incredible story on its own, bucking every trend we are told dictates the shape of housing in our city. But initial conversations with the people involved in this amazing project revealed that there was a bigger picture in the old London Borough of Bermondsey. The area is a thriving hub of deep-rooted commnity activism, and the film takes us to meet some of those dedicated people working to keep the spirit of Bermondsey and Rotherhithe alive in the face of enormous change.

Screening with the brilliant Video Strolls has the added bonus of a chance for a wander round Birmingham. I’ve blown through a couple of times before on tour with Russell Brand but those occasions were restricted to backstage views of venues and a quick dash through the Bull Ring searching for gifts for the family.

The occasion this time was a screening of London Overground at the Flatpack Film Festival and despite my best intentions I arrive with only an hour or so to explore. Instead of searching out new sights/sites I want to pay homage to the Birmingham Surrealists and somehow connect them to Birmingham’s Edwardian arcades. 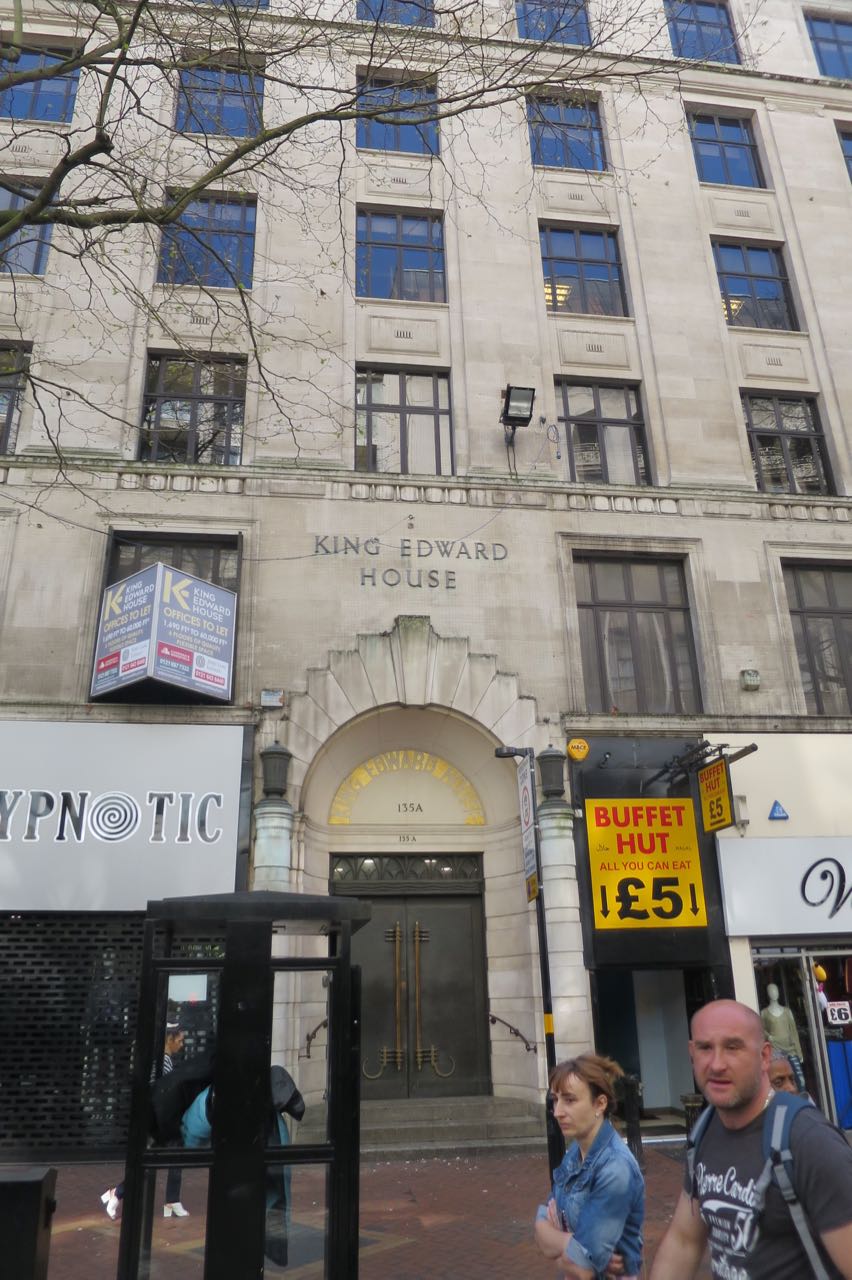 The crowds are out enjoying the sunshine pitching into New Street. There’s something about the architecture that reminds me of Downtown LA, the fading grandeur of former times. Could Ridley Scott save himself a few quid and shoot the next Blade Runner movie in the midlands, bounty hunters pursuing Replicants along the corridors of King Edward House. 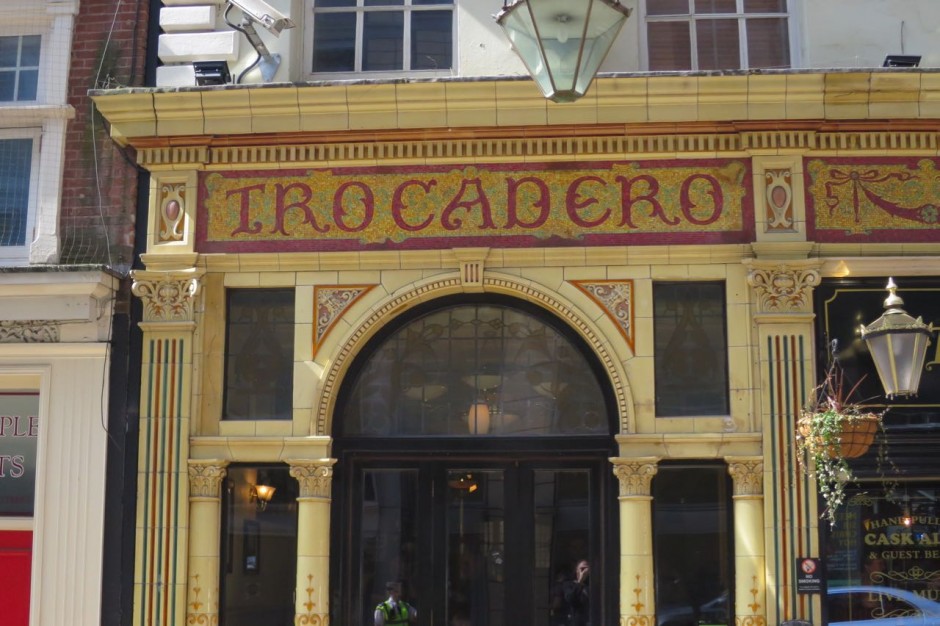 I stand outside the Trocadero pub in Temple Street, one of the haunts of the Birmingham Surrealists. I know the Kardomah Cafe is nearby but can’t locate the exact location until Andy Howlett takes me back there after the screening to point out the ghost sign still visible above the entrance to Hawkes and Curtis menswear shop. 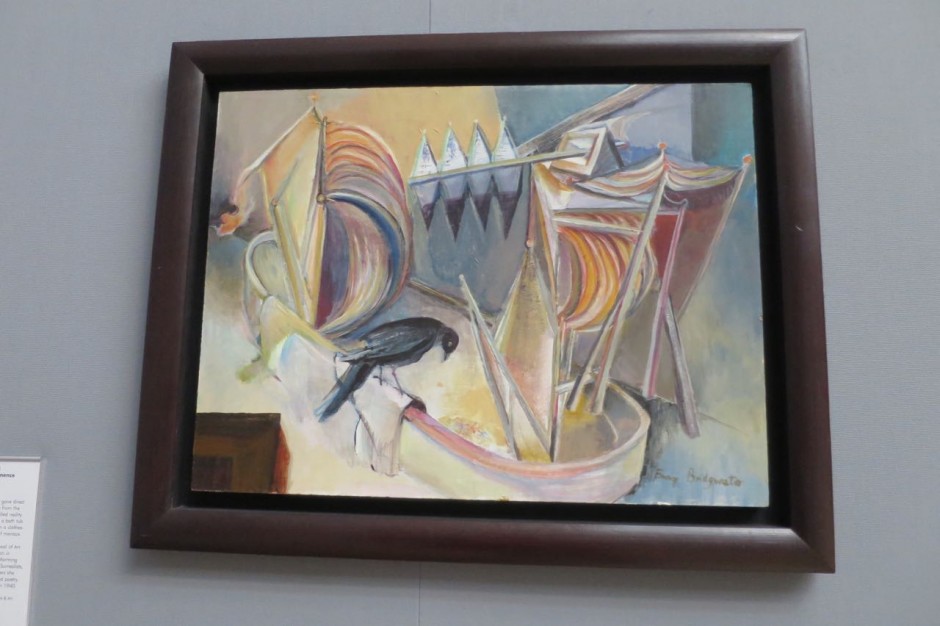 Emmy Bridgwater Night Work is About to Commence (1943)

I move on to the Birmingham City Gallery and Museum to find the surrealists there. The entrance is dominated by Jacob Epstein’s bronze statue of Lucifer (1944-45). After touring the galleries I find a painting by Emmy Bridgwater  Night Work is about to commence (1940-43). Bridgwater, born in Edgebaston in 1906,  was a key member of the Birmingham Surrealists along with Conroy Maddox and John Melville. It’s Melville’s Aston Villa that I spot next, painted in the year Villa won the cup, 1956. 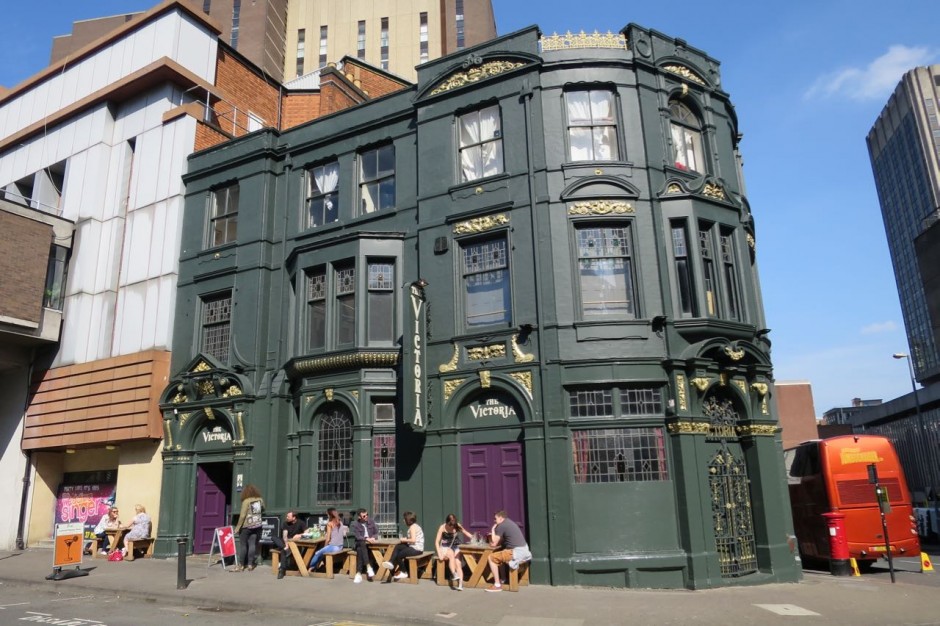 Time is moving on as it has a habit of doing when you have somewhere to be and I advance to the venue of the screening, a beautiful art deco boozer behind the Alexandra Theatre. The screening is packed and the film seems to go down well in its first outing beyond London. But once again I depart Birmingham vowing to return for more thorough exploration.

London Overground departs from the Capital for the first time with a screening at the brilliant Flatpack Film Festival in Birmingham on Sunday 9th April. The event has been organised by fellow travellers Video Strolls who I’ve previously had the great pleasure of screening with at Flatpack in 2015, and also at the MK Gallery in Milton Keynes. I’ll be going up to Birmingham to do a Q&A and also hope to explore more of the city that beguiles me more with every visit – on each occasion for a Video Strolls event. 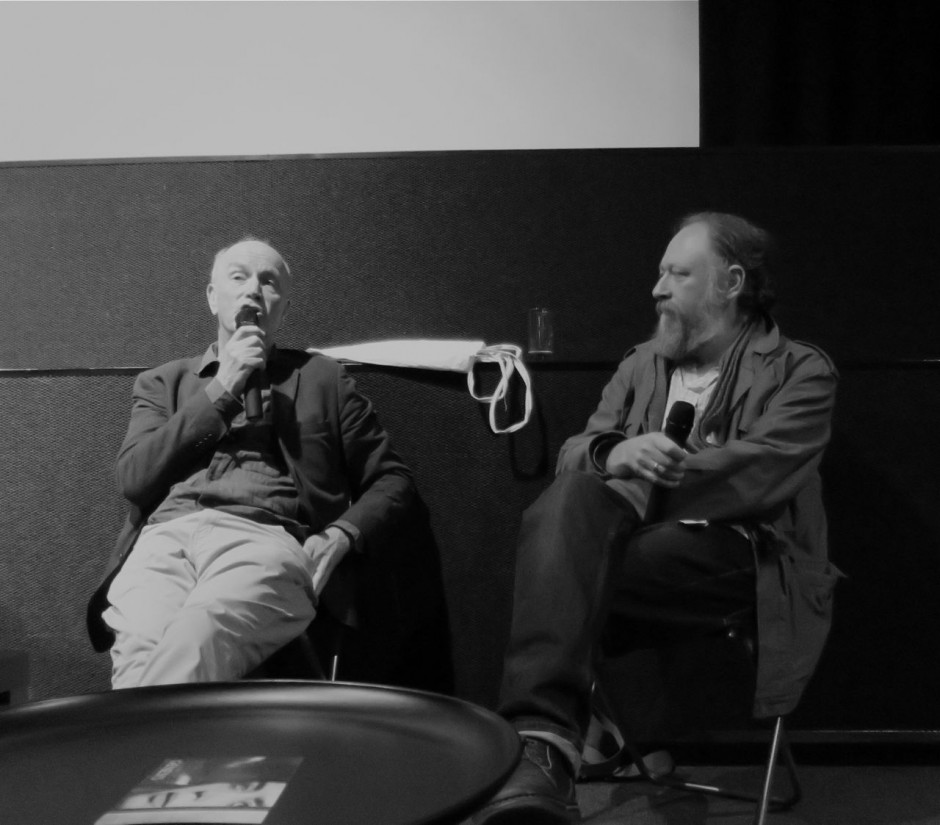 Back in October 2016 London Overground screened at the Genesis Cinema in Stepney Green and the Q&A I did with Iain Sinclair is now available as a podcast from the Luxury Book Club – it was a good one if I remember correctly. You can have a listen below: