This was a walk inspired by a comment on this blog by Philip Avery that I discovered 7 months after it had been posted.  It was on my video about the walk to Boudicca’s obelisk in the Epping Uplands and Philip’s research had suggested that the British king Cassivellaunus had been defeated by Julis Caesar in 54BC at Ambresbury Banks during his second invasion of Britain rather than Wheathampstead. I instantly googled ‘Wheathampstead Cassivellaunus’ which led me to the image below I captured on the my own expedition to Devil’s Dyke  how could I not visit this site. 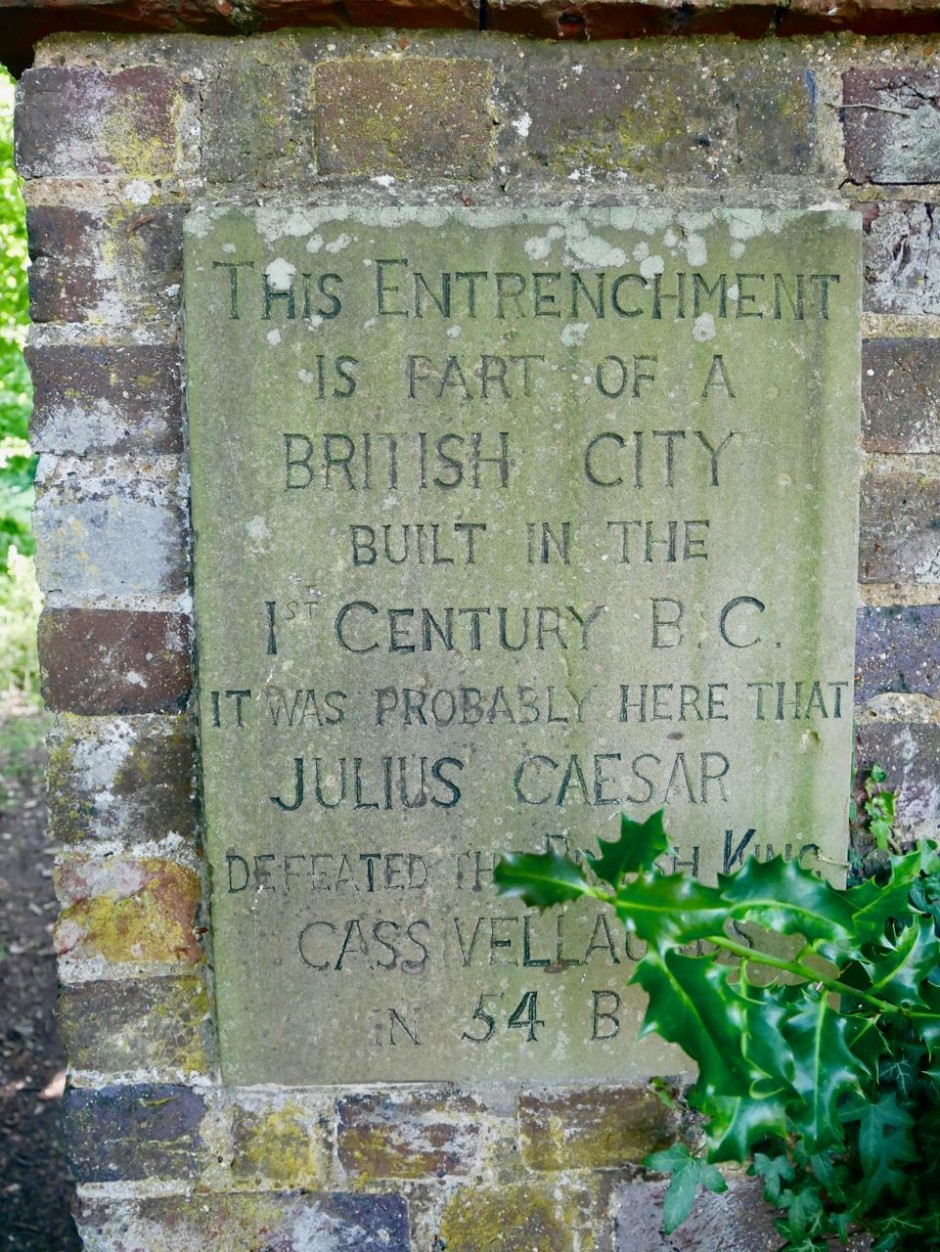 The walk starts at Harpenden in Hertfordshire and follows the upper reaches of the River Lea, picking up the Lea Valley Walk as far as Wheathampstead. We then go along the majestic earthwork of Devil’s Dyke, one of the outer entrenchments of Cassivellaunus’s ‘city’ and stronghold of the Catuvellauni tribe (there is another earthwork on the outskirts of St. Albans also associated with Cassivellaunus). From here we follow the Hertfordshire Way to the edge of St. Albans and then pass through part of the Roman city to St. Albans Cathedral drenched in midsummer magic.

Take a look at my latest video: a walk along the Suffolk Coast from Soutwold to Dunwich in the footsteps of W.G. Sebald from the classic book The Rings of Saturn

The Queen and Albert pub in Wooburn Green wasn’t were I expected to end up when I boarded the 3.15pm train from from Marylebone to Gerrards Cross the week before Easter. Notre Dame was burning down on the TV on the pub wall, an event that had been unfolding whilst I’d been walking over the Chilterns unaware. It was good to hear the Bucks accent from the chatter between the friendly lady behind the bar and the two other punters. It was great to be back in the village where I grew up.

My intention that day had been simple – to take a look at the Iron Age earthwork at Bulstrode Camp, Gerrards Cross. I had a vague childhood memory of people talking about this ancient site but no clear memory of having visited. And with my interest in earthworks and burial mounds it seemed natural to seek out Bulstrode Camp, situated as it is just beyond the borders of Greater London. 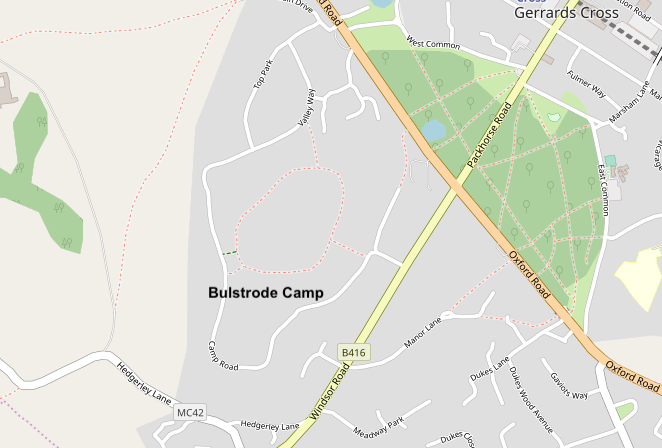 Bulstrode Camp is the largest hillfort in Buckinghamshire, spanning over 26 acres (other notable Bucks hillforts include – Whelpley Hill, Ivinghoe Beacon, West Wycombe, Bolebec’s Castle). A ‘plateau camp’, it sits atop a steep escarpment and is today encircled by a private housing estate. Dog walkers perambulate the perimeter as if repelled from the interior by a magic spell. I strode straight across in a bisecting line – better to take in the scale of the earthwork from its interior. It’s a powerful site, even more imposing in this age of bits and bytes. 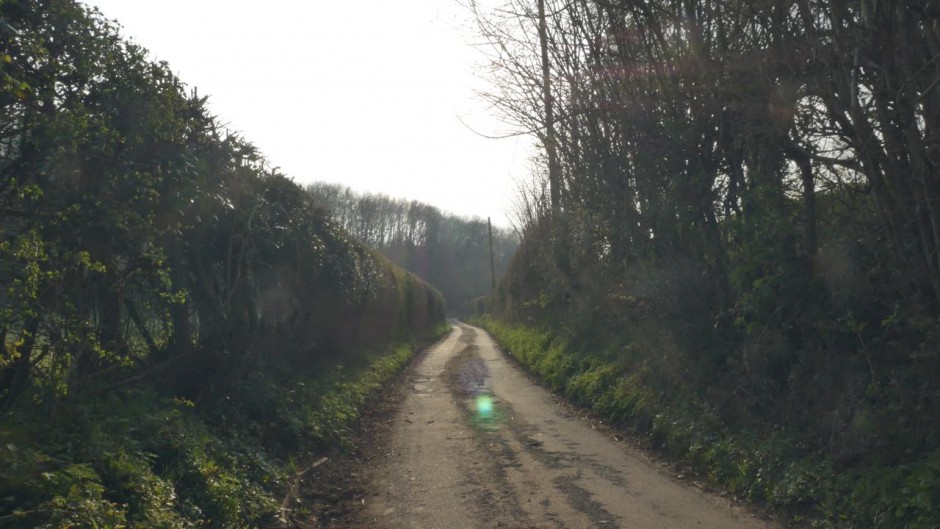 With the site surveyed and recorded on camera I still had around 3 hours of daylight left so headed out over the fields of Bulstrode Park to Hedgerley Village where the parish church sits high on a hill surrounded by a bluebell wood. At this point the temptation to strike off for Wooburn was too great.

The lowering sun sliced shafts of light through the pine trunks in Egypt Woods as the pheasants gave out their evening call. My Dad would have had a field day and we briefly spoke on the phone discussing the best route to Wooburn (he thought I was way off course).

My chosen path took me over Littleworth Common and now the journey took on the feel of a return to a childhood home as Wooburn Common (the land of the ‘fuzz hoppers’ as my Nan would call them) showed itself nearby on the map. 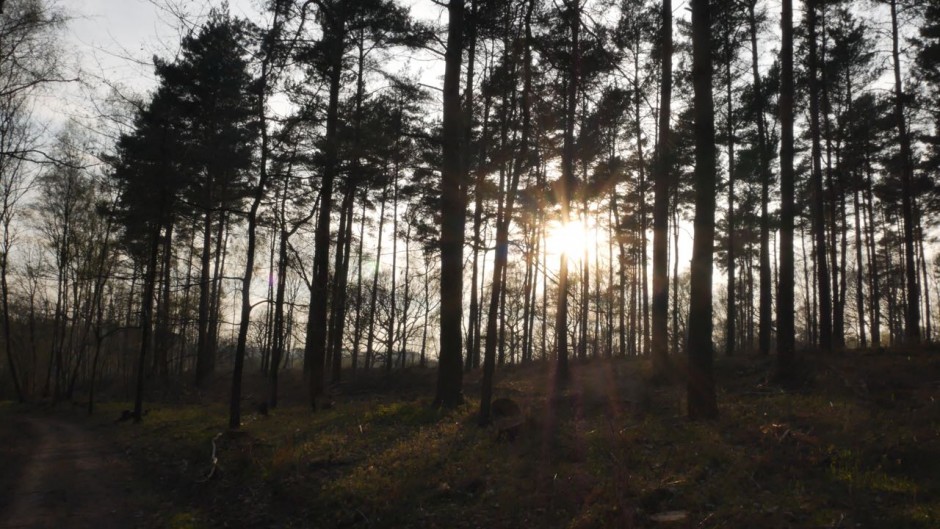 I arrived beneath the Radio Tower at the top of Farm Wood at the hour of sunset. This tower loomed over my childhood as a mysterious structure poking out of the dark wood above Wooburn Park where I spent all my summers with my Dad as he played for Wooburn Narkovians Cricket Club. I had only been this close twice before (at night with the Scouts and with my kids about 10 years ago).

From the edge of the wood, in the last light, I looked down across Wooburn, the river valley carved out by a glacial flow that deposited a rock that still sits idly on the Green by the bus stop. The River Wye gently trundles along its floor. I stood there as day slid into night before making my way across the park to the pub.

Highwaymen images in the video from Highwayman’s Heath by Gordon S. Maxwell.

When searching for William Stukeley’s ‘Druid Temple’ on Navestock Common, I’d noticed Weald Country Park both on the map and the horizon. The map also showed a ‘settlement’ marked on the edge of the park, which a quick Google search identified as an Iron Age Camp or Fort.

“Three years after the excavation, a detailed contour survey of the earthwork and its immediate environs was undertaken as part of a separate project aimed at assessing the archaeological potential of the Essex Country Parks.  The two trenches excavated sectioned the univallate defences in the north-west and south-west quadrants. Both the excavations and the contour survey date the beginning of the construction of the hillfort to the Late Iron Age. Dating is provided by small amounts of Late Iron Age pottery in the rampart make-up. One trench had a well-defined linear cut interpreted as a slot for a revetment at the rear of the rampart. Within the area enclosed by ditch and rampart were a number of post holes also dated to the late iron Age; they may represent internal structures.”

It was a site that demanded further examination. 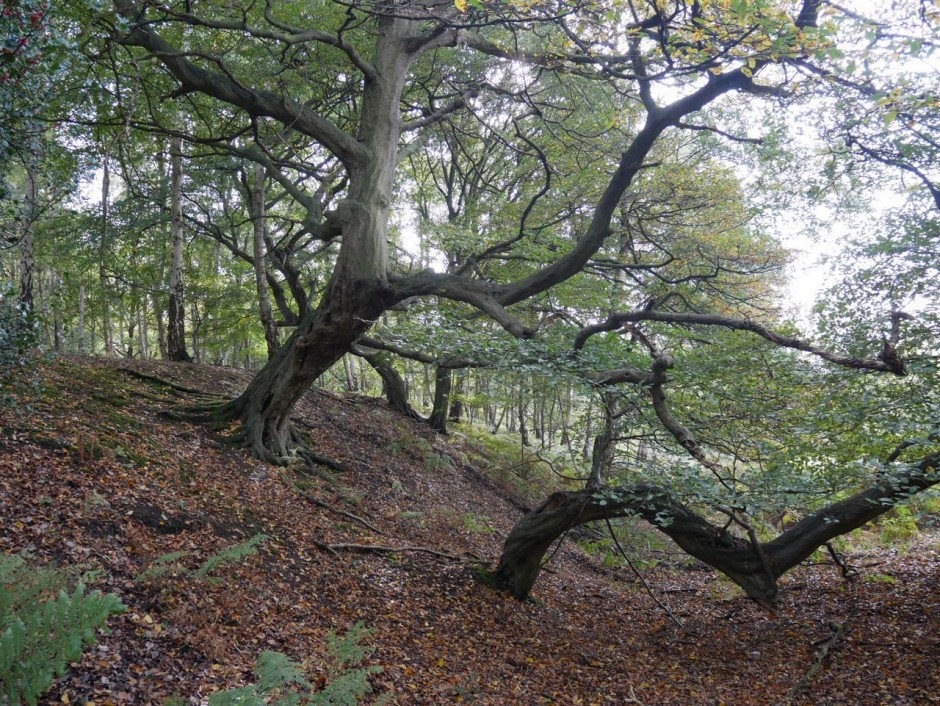 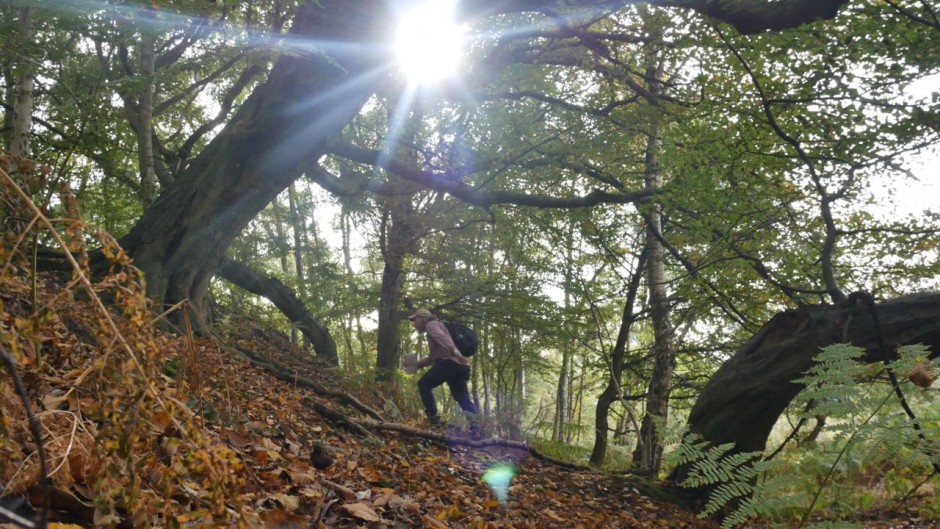 After marvelling at the surviving earthworks and pretending to be a member of the Trinovantes tribe running up and down the rampants and ditches, I decided to push on through Weald Park to another of the possible locations of Stukeley’s ‘Druid Temple’.

“The central mound had been heavily quarried with a circle of trees interpreted as denoting the original edge of the mound. Havis suggests this represents a small motte and bailey or two adjoining baileys to the central motte. It is not clear whether this is the temple refered to by Stukely or if that is located at the western end of Mores wood.”

You’ll have to watch the video above to see if my quest across two walks was ultimately successful.

Search for the Druid Temple on Navestock Common

Prompted by a comment on a previous YouTube video I headed out the other week in search of the remains of the “alate temple of the druids” identified by William Stukeley on Navestock Common in the early 18th Century.

The walk started at Harold Wood, then passed over Central Park Harold Hill and then across the beautiful Dagnam Park. From here I progressed to Noak Hill and up to Navestock Common – or what remains of it.

Here are some of the notes I found relating to Stukeley’s ‘Druid temple':

“Another ancient earthwork, of which hardly any traces remain, was situated on Navestock Common, by the road from Ditchleys (in South Weald) to Princesgate, near the parish and hundred boundary. It was visited on several occasions in the 18th century by William Stukeley (1687-1765) who described it as an ‘alate temple’.”
https://www.british-history.ac.uk/vch/essex/vol4/pp139-143#highlight-first

“In 1725 William Stukely came across a feature on Navestock Common which he described as a system of mounds and earthworks. He gave the site the name “alate temple of the druids” as part of the earthworks, according to Stukely, took the form of a wing (`ala’ is Latin for wing). E A Rudge reports seeing earthworks in Mason’s Plantation but their size and shape could not be deciphered as they were so overgrown. <1> OS plan card shows a copy of Stukely’s plan. <2> A member of the public (Mr Channon) had reported the flattening of mounds on the Mores Plantation. A site visit to confirm this was made by Havis and Medlycott (4/4/1992) who found that the brambles previously reported had been removed (1986 to 1991) revealing a series of earthwork banks surrounding a central circular mound. The central mound had been heavily quarried with a circle of trees interpreted as denoting the original edge of the mound. Havis suggests this represents a small motte and bailey or two adjoining baileys to the central motte. It is not clear whether this is the temple refered to by Stukely or if that is located at the western end of Mores wood. <4>”
http://unlockingessex.essexcc.gov.uk/uep/custom_pages/monument_detail.asp?content_page_id=89&monument_id=2289&content_parents=48,61,63

Watch the continuation of this quest here 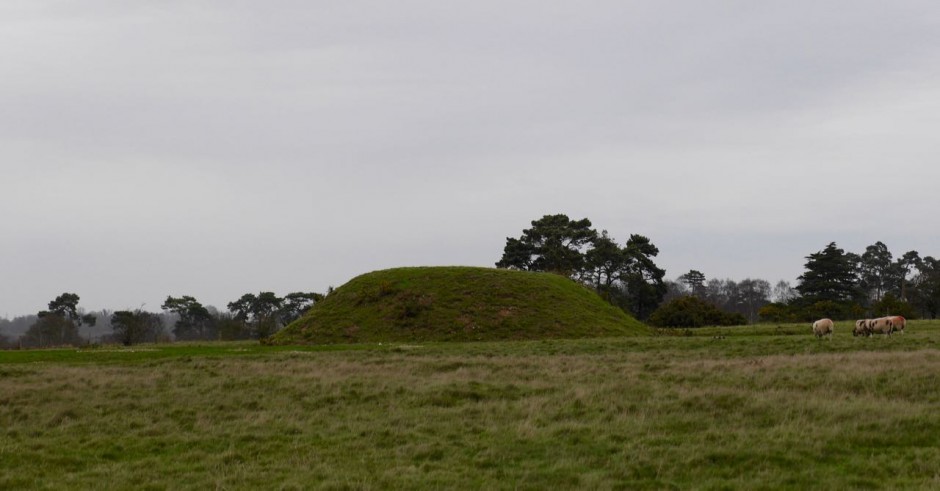