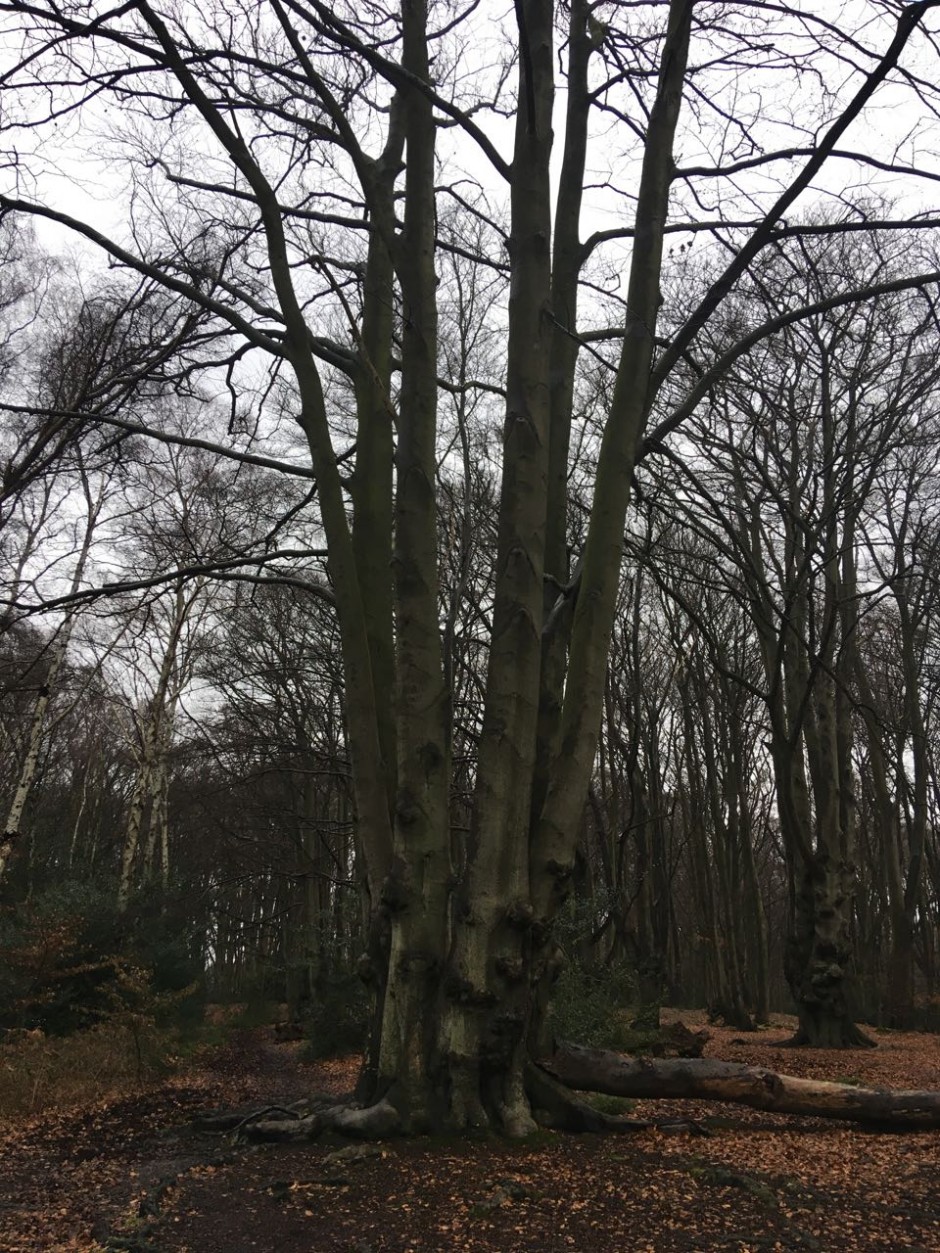 I head into the forest at 3.15pm in the rain – up from Loughton Station straight to Loughton Camp – a place of peace, retreat. Rain taps on the fallen leaves. The gloom and rain mean there’s not a soul around. The mighty trees look over me. 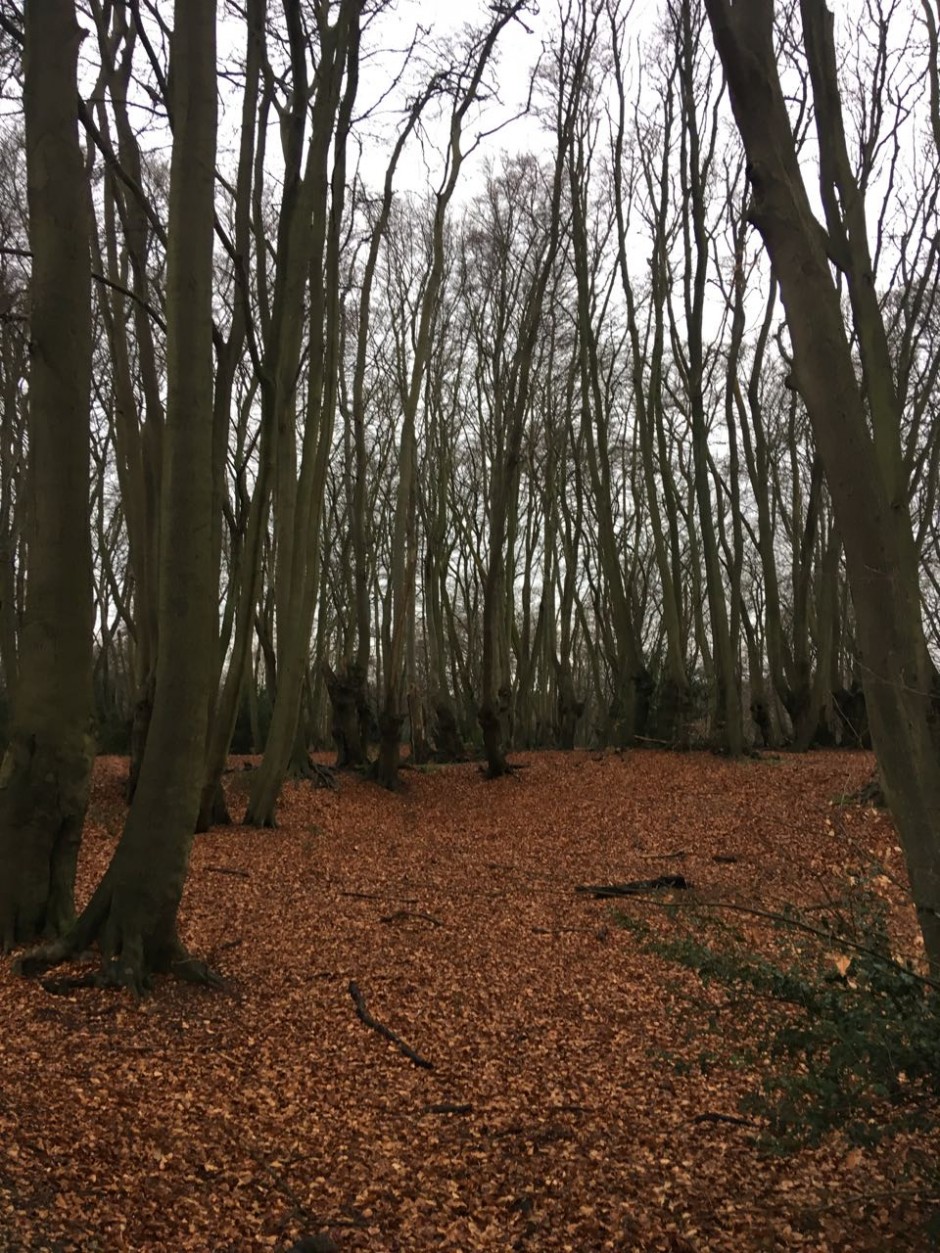 These trees have stories – great mythologies, lineages stretching back millenia. I wish I could hear their tales, if I stand still for long enough and listen to the breeze will I gain their trust? 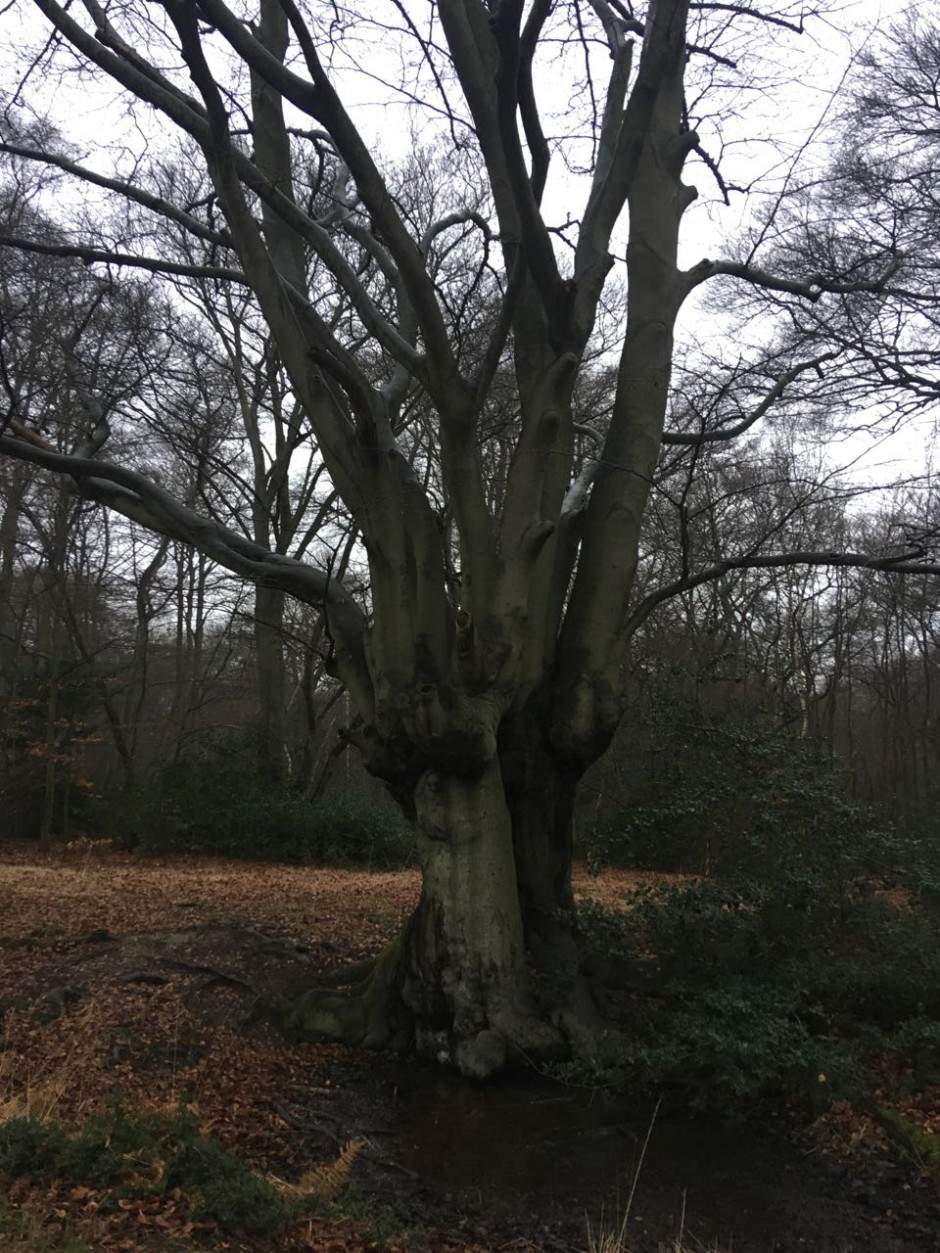 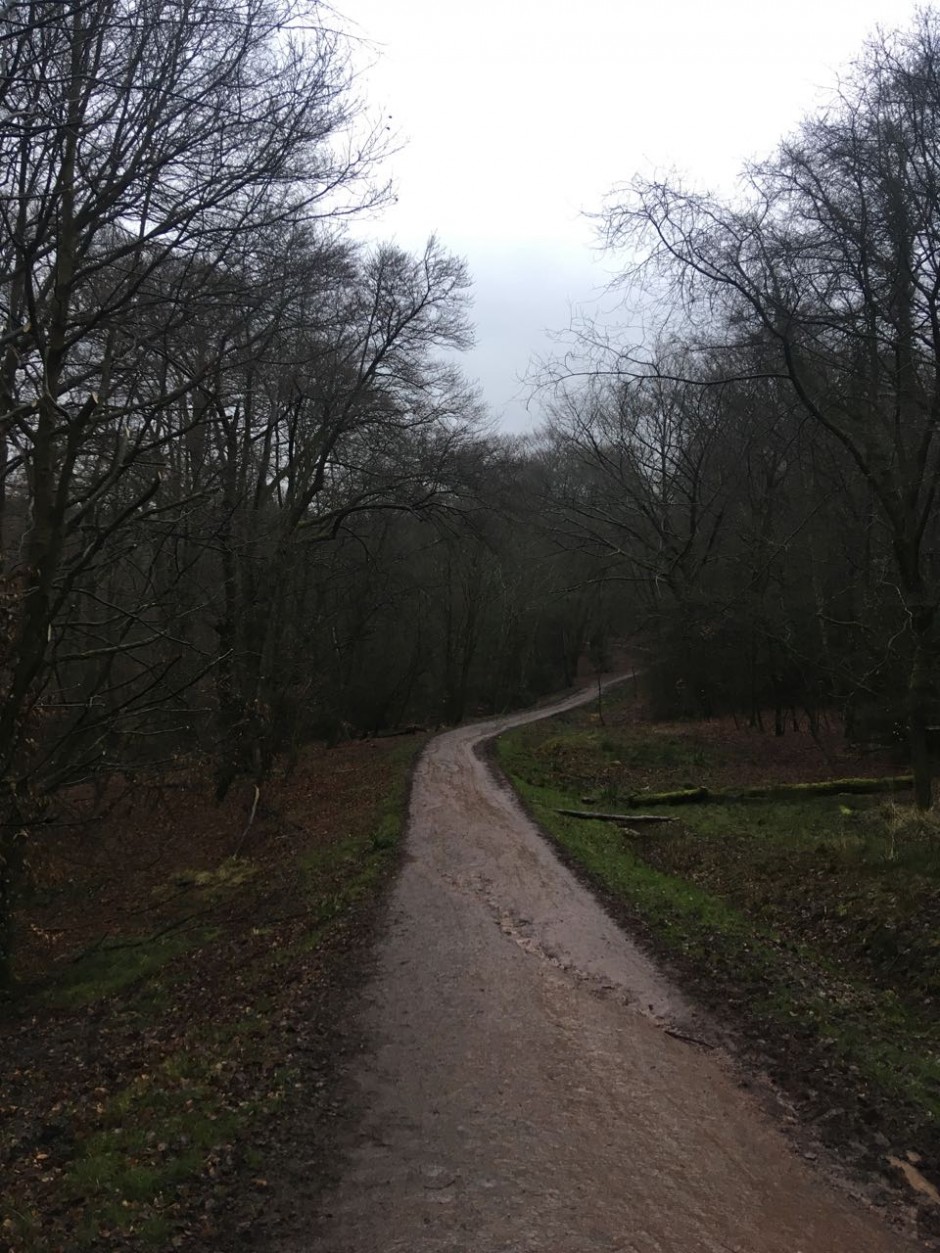 A large white horse stands on a bend on the the high path through Great Monk Wood like a mythical beast. I chat to the rider and compare notes on traveling through the forest in the last light. We part in opposite directions wishing each other well. I have a distance to go to reach Epping and it’s now just before sunset. 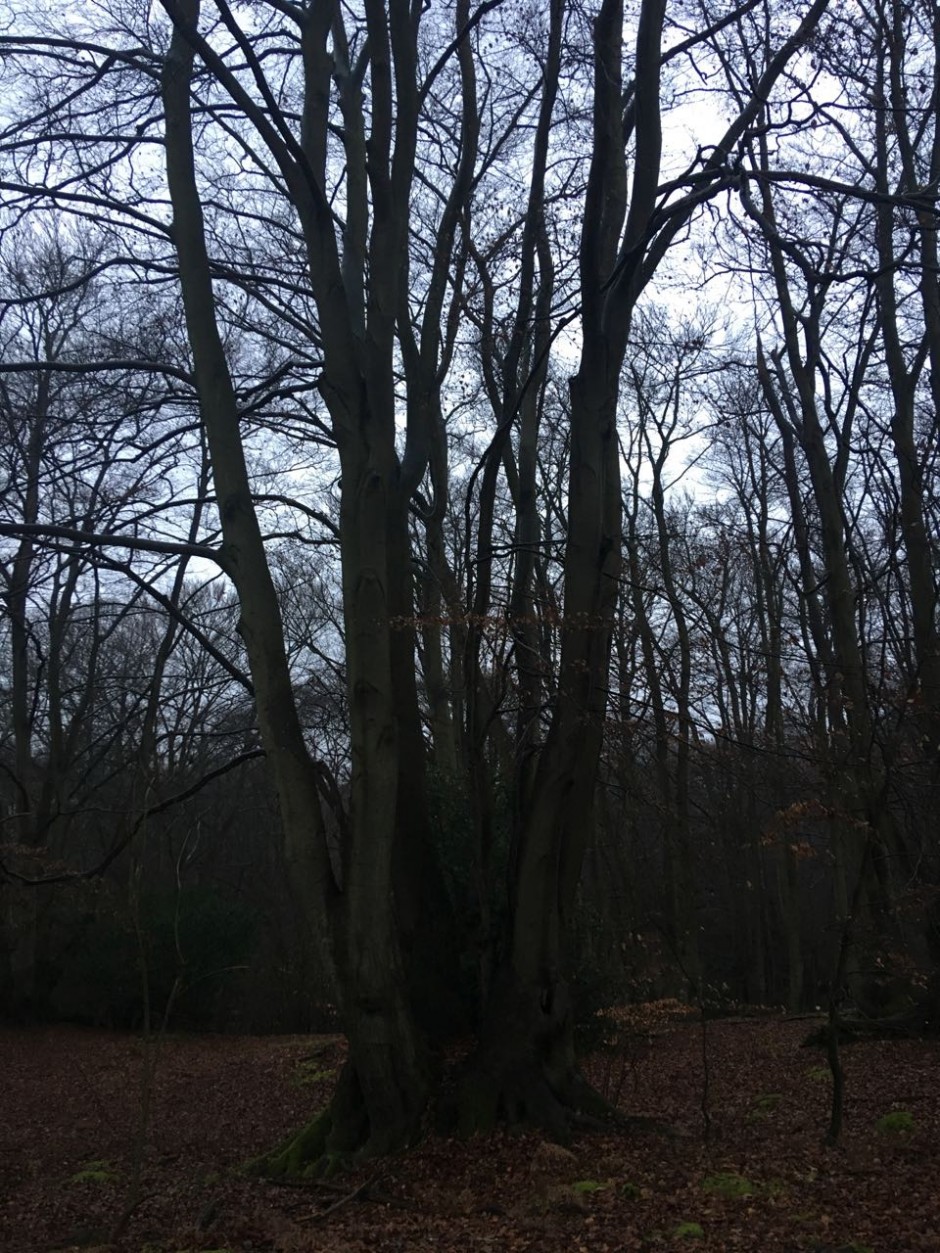 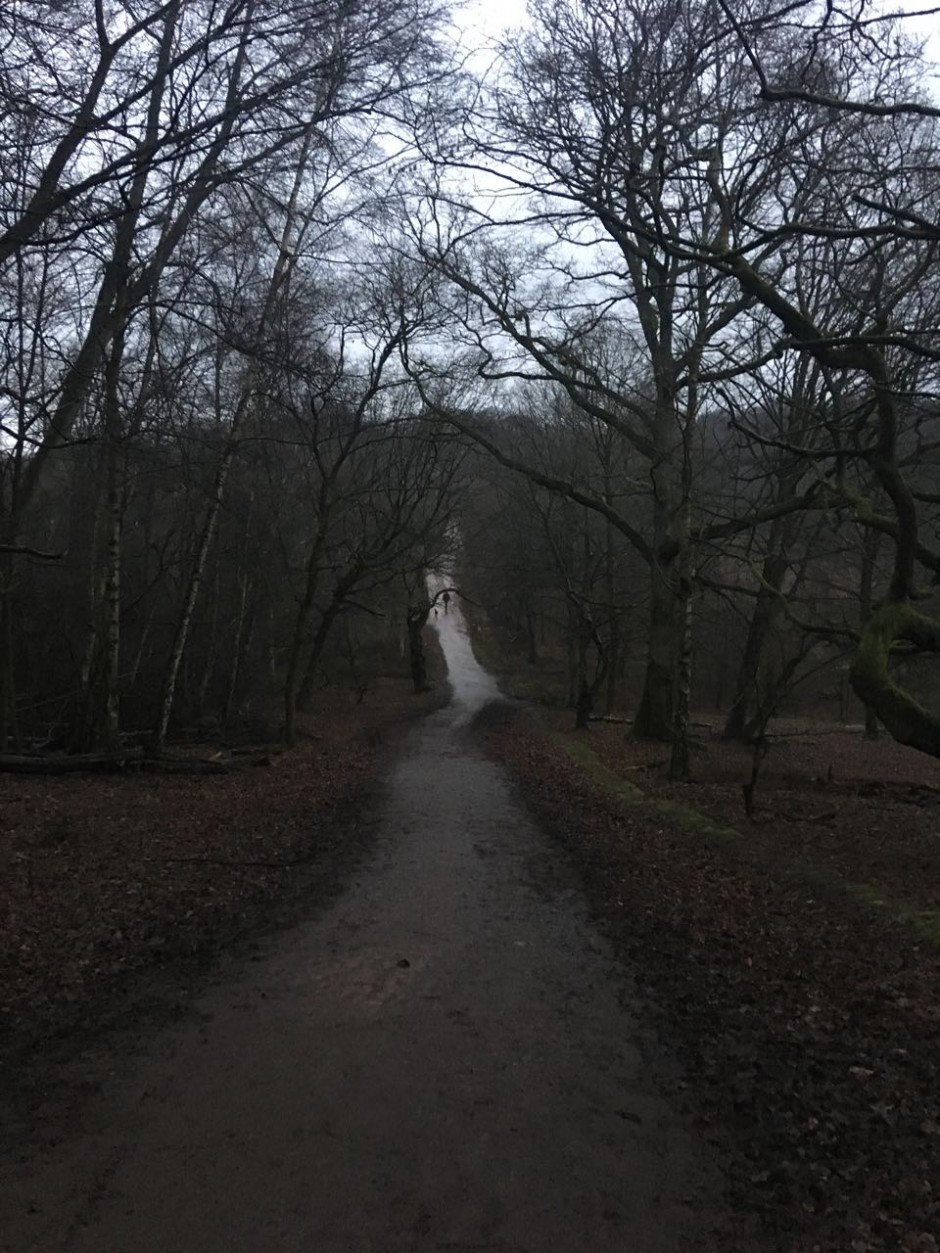 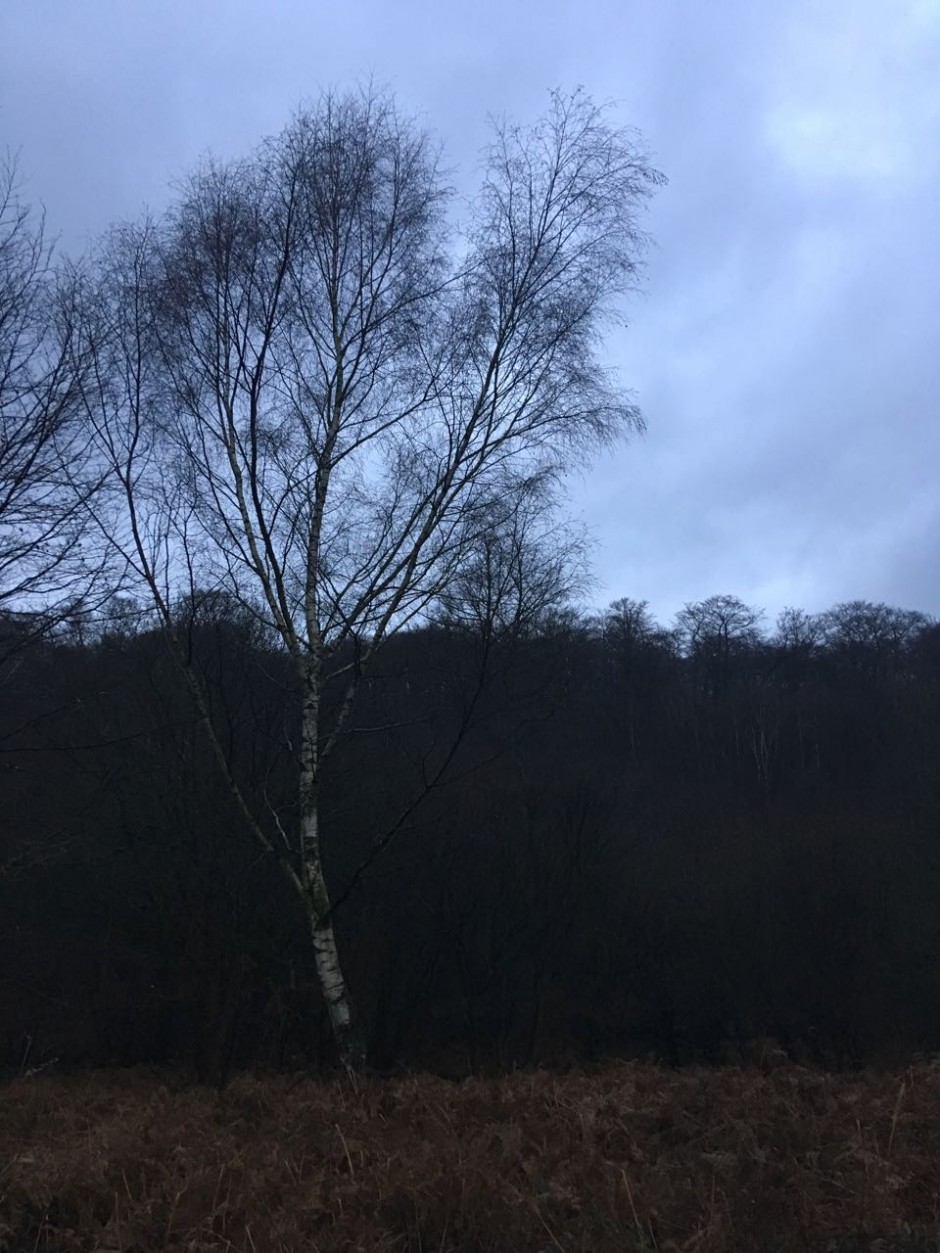 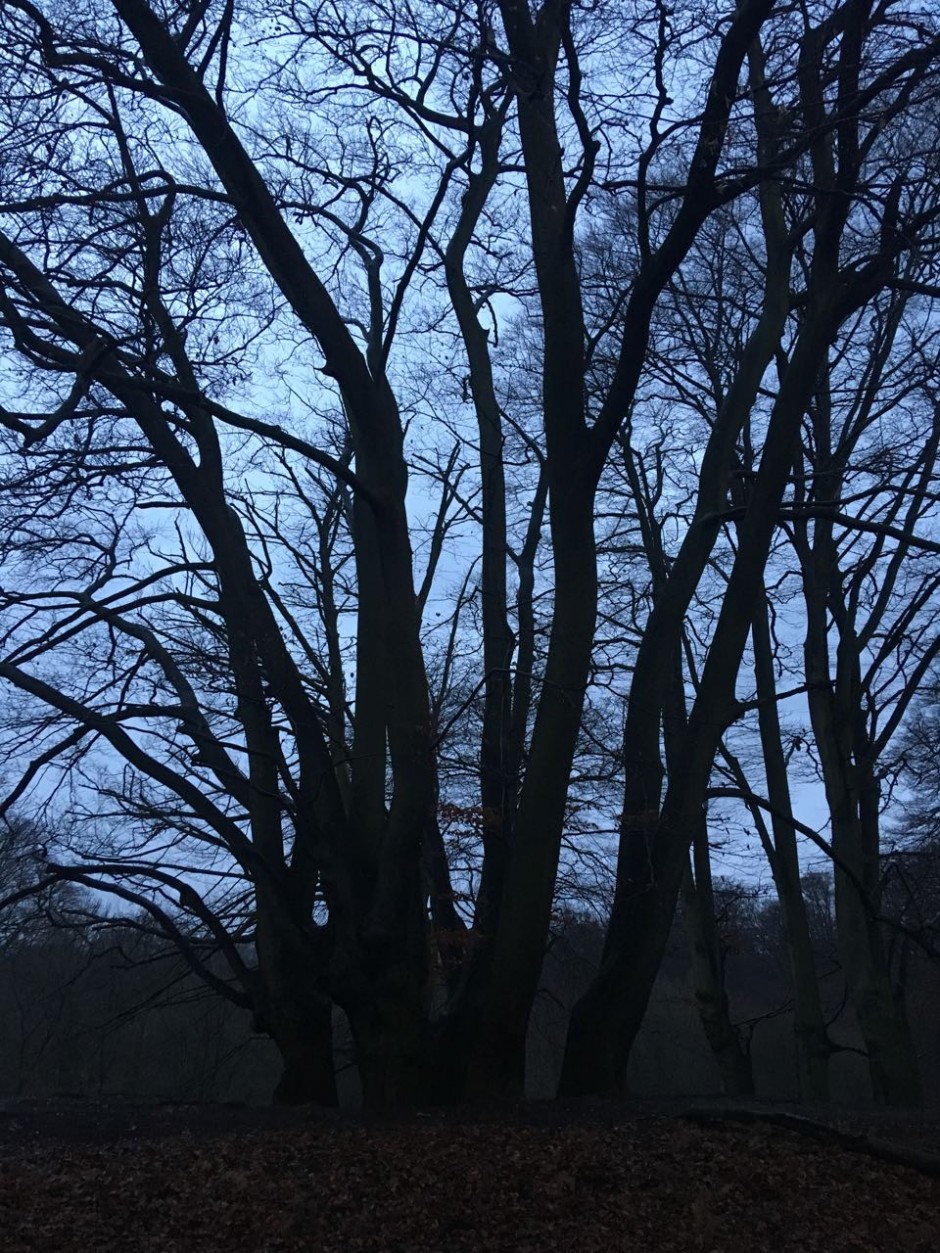 It’s dark when I cross the road and onto Ambresbury Banks. I stand to admire the deep entrenchment – in many ways more imposing than Loughton Camp. 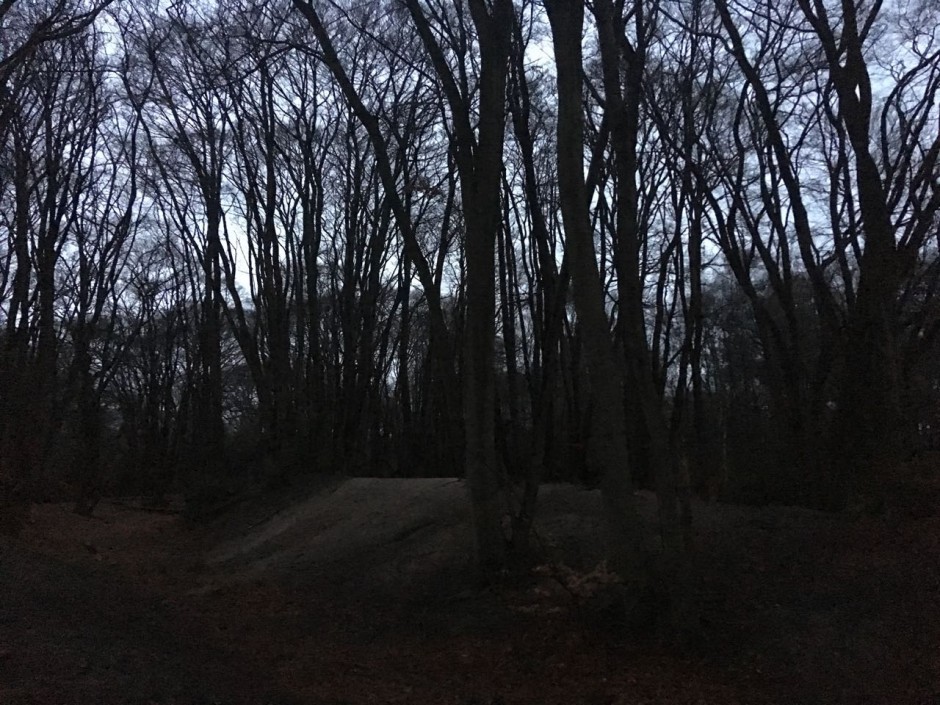 It’s pitch black now – but I have a nice wide path to guide me and the forest to myself. Not even an animal stirs or a nocturnal dog walker. How easy would it be to duck into the overgrowth, throw a tarp over some low branches and bed down for the night? 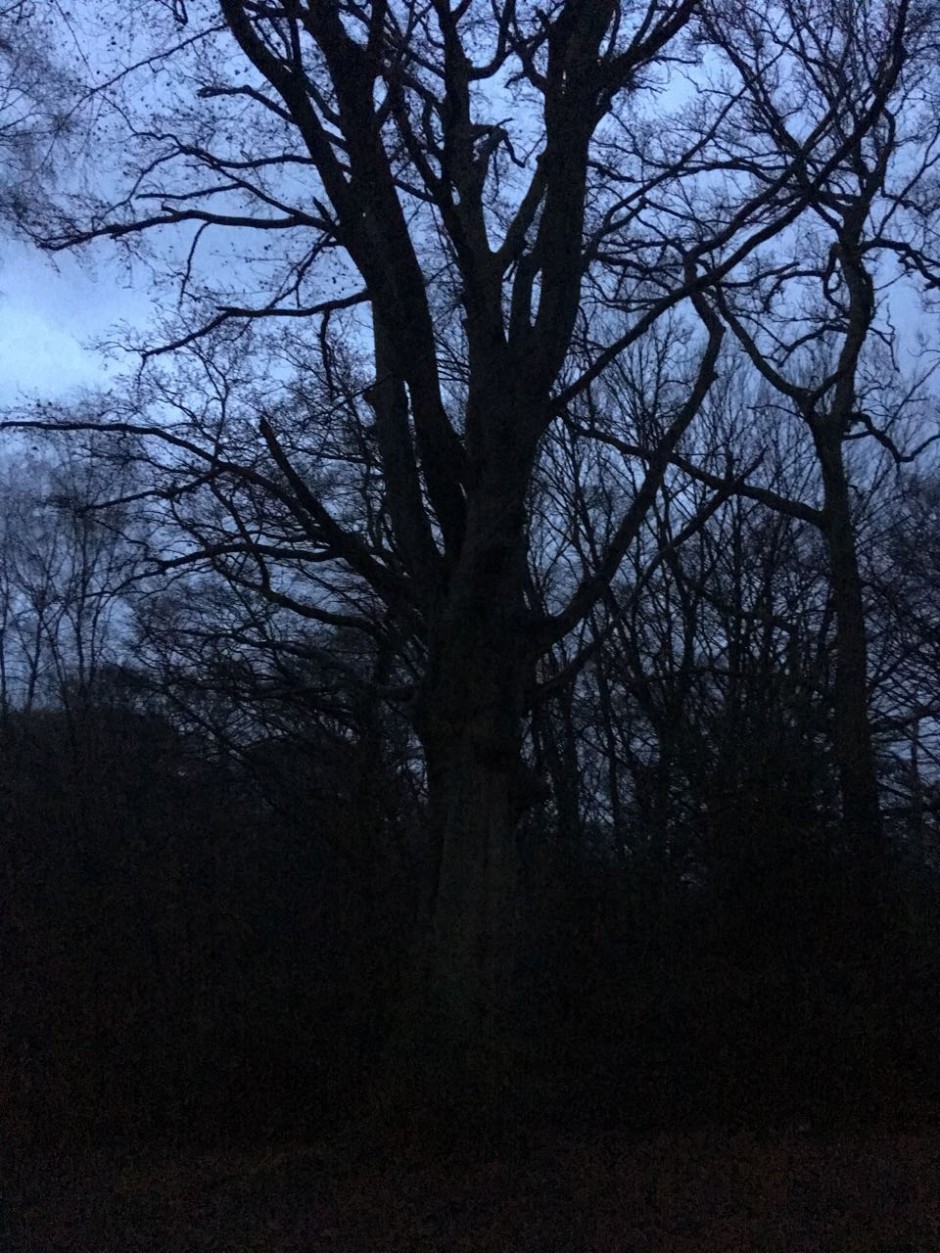 A fallen tree by the path in Epping Thicks glows white like a ghostly face on the edge of the path. I feel it in the pit of my stomach – and stand still.  When I move on I see movement through the trees, horses running along the ridge at the top of the forest …. before I see that it’s my walking giving the static tree trunks motion against the lights of Epping Town in the distance, like a woodland zoetrope. How the light plays tricks on the mind in the dark. The running horses were ghosts of my own mind.

The forest is still. 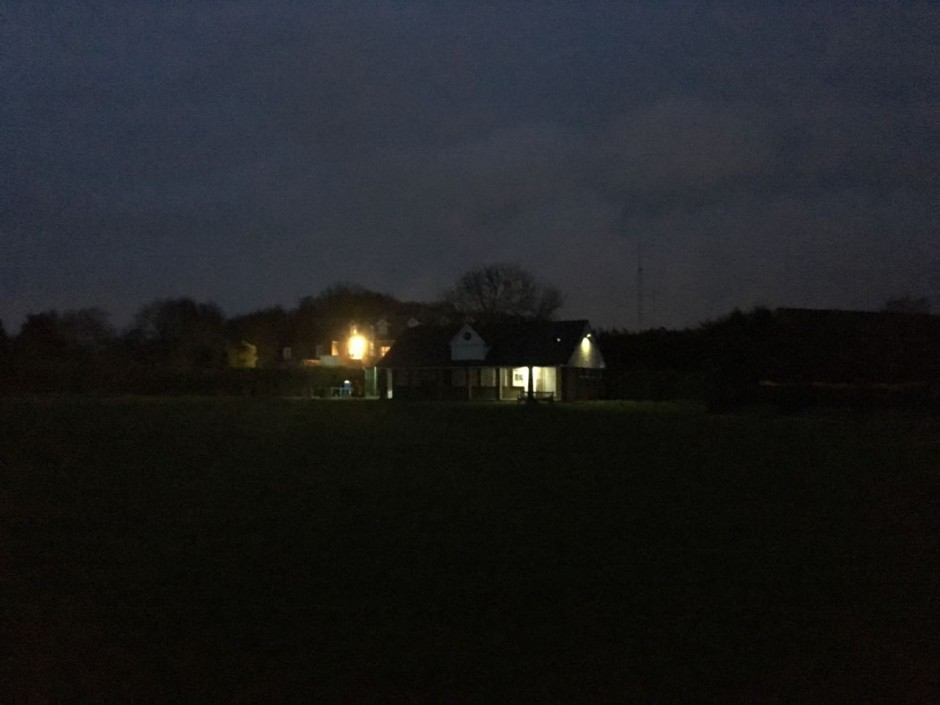 Epping cricket pavillion on the edge of the forest

The magic of the forest 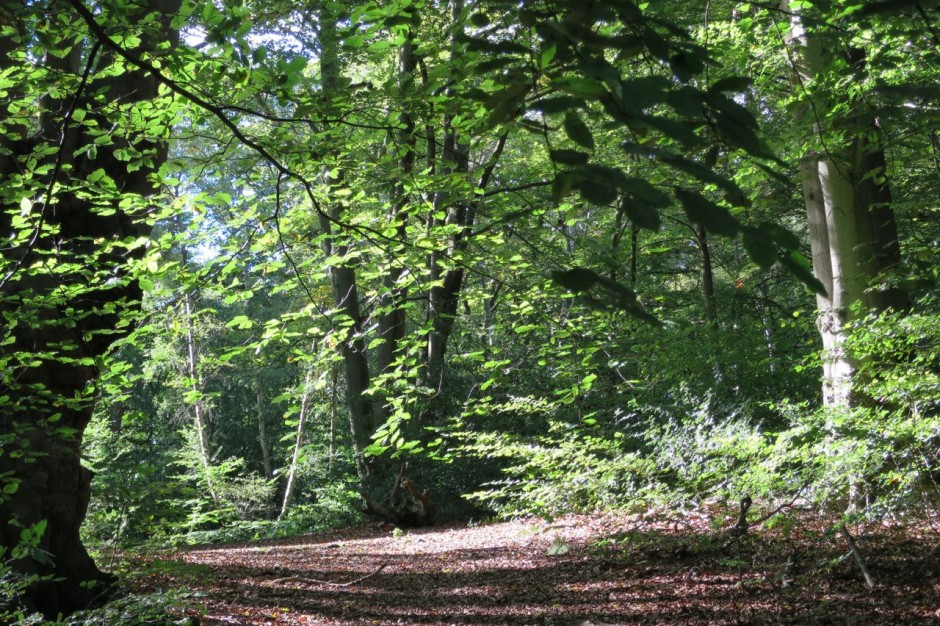 The impact of time spent in the forest doesn’t hit till I emerge from Leytonstone Tube Station – that’s when the quickening pace of people heading for the bus stop, the four-bags-wide shoppers, and coagulation of Sunday loafers smart-phone illuminated in the early evening dark comes as an uncomfortable JOLT.
I am back.

The other Sunday I wanted to walk the virus out of my heavy legs. The forest had been calling for a few days. I could have gone anywhere but a quick look at the OS map and a flick through Buxton’s Epping Forest narrowed it down to a route from Loughton to Theydon Bois. Buxton comes with me on all my forest schleps – the maps are good although the directions can be vague – this is what he has to say about the walk I followed:

“Follow the ridge of Baldwin’s Hill as far as Golding’s Hill ponds…. At Golding’s Hill cross the Loughton road and take the green road along the eastern boundary of the Forest. The views in all directions over the woodland make for a charming walk.”

That is a slightly truncated quote but the parts I’ve omitted simply offer alternative routes and indicate the road to Theydon Bois station at the end. However, in conjunction with an OS map I was able to follow Buxton’s walk, which can’t have changed much since he plotted it in the 1880’s. 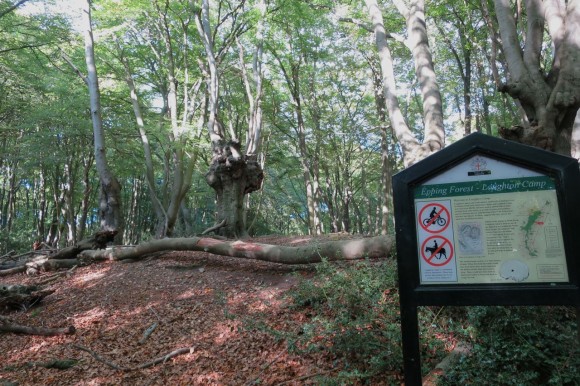 I ducked off the path leading up from Loughton, beneath low hanging boughs into the scrub and picked up a muddy track leading to a dried up streambed. I continued along the natural contours of the ground guided by intuition which usually serves me so poorly as I have the directional sense of a Lemming but this time it took me to Loughton Camp – a place that seems to exert a magnetic pull on me these days. Maybe I pine to live in the Iron Age. I walk the deep southern outer trench of the earthwork, up over the bank that would have originally supported high timber walls, and pace along the mounds and ridges of the interior then push north-east above a small stream that fed the camp. 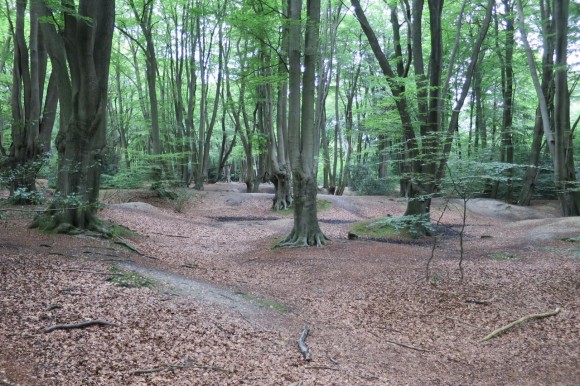 I later discover that my journey echoes that of B.H. Cowper Esq. in the summer of 1872 when he appears to have been the first person to survey and document Loughton Camp as an ‘ancient earthwork’. He wrote in the Archaeological Journal:

“In the summer of 1872 I made an excursion to Epping Forest, and selected Loughton as my starting point. On reaching some elevated ground which overlooks a deep valley stretching from the north-west to the south-east, I came upon what appeared to me at once as part of an ancient earthwork. I found on examination that an external trench enclosed an internal ridge running parallel with it, and that these took the course of a segment of a circle.  At that season the trench, the ridge, and the interior space were not easy to investigate owing to the vegetation, but I saw that the trees were as old as others in the locality, and grew upon the earthworks just as they did everywhere else. This cursory survey of a portion was all that was then practicable, and the matter rested until on inquiry I found that no one seemed to know of any entrenchments thereabouts. Subsequently I mooted the matter in ‘Notes and Queries,’ but with no satisfactory result, inasmuch as it only led to references to Amesbury or Ambresbury Banks, a large and comparatively well-known earthwork of oblong form and early origin, in the Forest it is true, but over two miles to the north of this in the direction of Epping.” 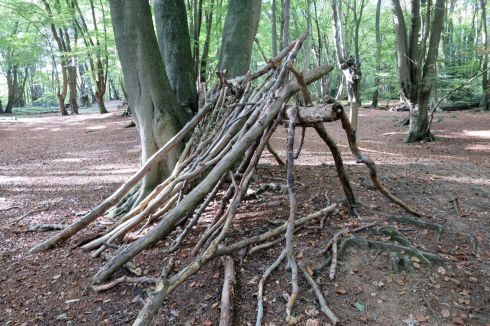 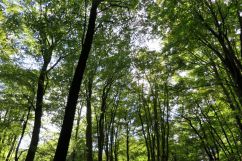 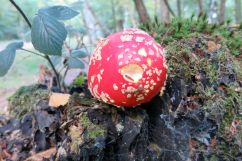 I somehow stick to Buxton’s route and cross Goldings Hill bound for Theydon Bois. People recede – Furze Ground is deserted. Approaching the campsite at Debden Green loud music whirls through the beach and oak boughs. I follow The Ditches Ride and look out across Copley Plain. 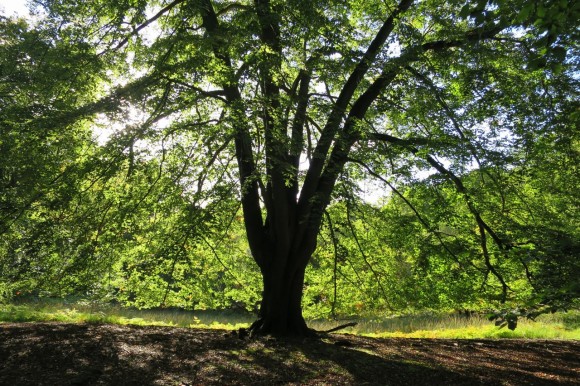 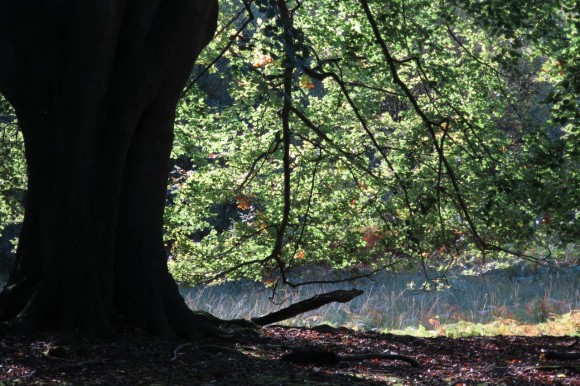 I’m not ready to descend to Theydon Bois and so cross Jack’s Hill and forward to Ambresbury Banks – the forest’s other recognized ancient camp. The trees around the earthwork loom like sentinels, imposing, powerful, like Tolkien’s giant walking trees the Ents, custodians of the forest and the oldest living things in Middle Earth. I wait for them to say something, or lift me up for a better view but they just stand there rustling their leaves in the autumn breeze. 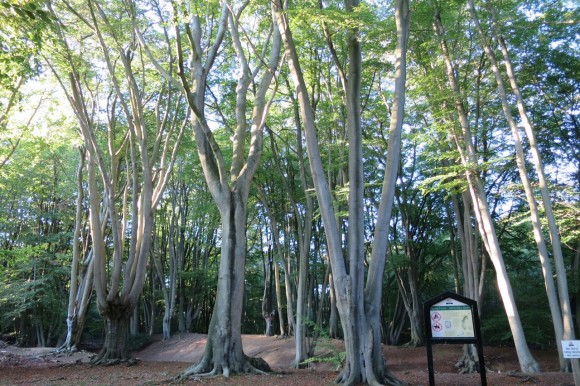 It’s thought that Ambresbury Banks and Loughton Camp were part of a chain of enclosures and hill forts that marked the boundary between the territories of the tribes of the Trinovante and Catuvellauni. Lately I’ve been deriving great comfort from coming out to these sites – I think it’s the sense of continuity in a time when London seems to be in a state of flux and great change. Maybe they easily facilitate an escape into an imaginary realm of the past, that, let’s be frank, would have been bloody harsh. I dwell for a bit remembering the time I came here with my son and he was having none of my attempts to play a game of Trinovante vs Catuvellauni as I rushed the banks with a stick-sword. 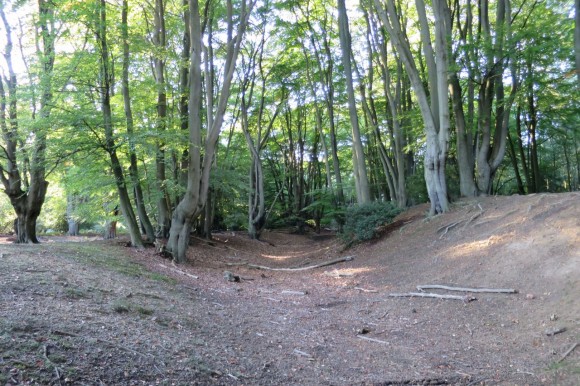 The walk finishes in golden sunshine past millionaire gangster-banker mansions on Piercing Hill. The leaves are turning, fruit fallen by the roadside. I wind up in the Bull by Theydon Bois tube.