Beautiful walk along the Thames Path from Putney to Richmond, taking in Barnes, Mortlake, and Kew, filmed on the 14th May.

Castle Seen from River, with Punt and Row of Trees in Foreground. ?Zion House, Isleworth
c.1815–17

I first did a version of this walk along the Walbrook back in November 2011, but was keen to return starting nearer to one of the supposed sources and also visit the recently opened London Mithraeum that sits upon the banks for this ancient stream. The route I followed in early December, drew from two principle sources – Nicholas Barton’s classic book, The Lost Rivers of London, and a sketch map of London Under Henry II by Marjourie B. Honeybourne from Norman London – An Essay by Professor F.M Stenton (pub. 1934). Stenton’s essay and the map is informed by a contemporary Norman description of London by William Fitz Stephen. 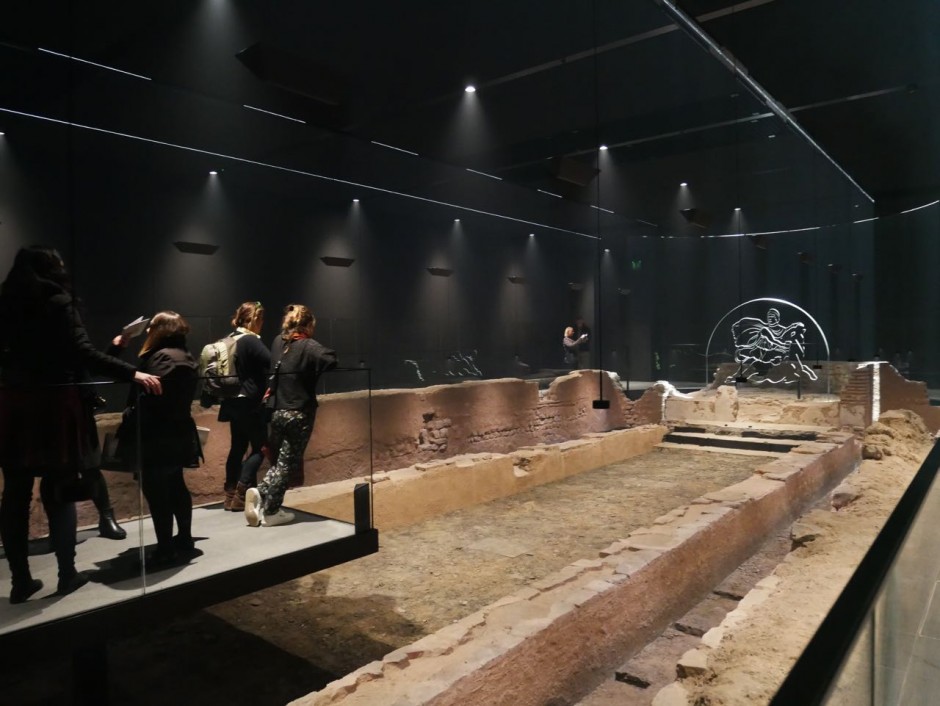 The route starts at St. Leonard’s Church Shoreditch, and goes past the Shoreditch Holy Well in Bateman’s Row. From here it follows the course of the river down Curtain Road to Blomfield Street where it was partially excavated during Crossrail works. Then we cross London Wall and go through Angel Court where another part of the river was uncovered in the 1970’s. We go behind the Bank of England at Lothbury then follow the buried river down Walbrook to the Temple of Mithras. From here we go down Dowgate Hill to where the Walbrook makes it’s confluence with the Thames near Canon Street Station.

A walk around Swanscombe Marshes and Botany Marshes on the Thames Estuary in Kent, near Dartford, starting and finishing from Ebbsfleet International Station. There are plans to build a theme park on Swanscombe Marshes so this beautiful landscape may not be there much longer.

A walk around the Royal Docks in East London from Prince Regent DLR station past the Excel Centre and around the Royal Victoria Dock with a look at Millennium Mills. Then down through the new Royal Wharf development and the Thames Barrier Park before returning to the Royal Albert Dock and finishing at Cyprus DLR.

Out to the sea. As the long Easter weekend fades behind us mentally today I’ll retread my steps of a month ago as I walked along the Thames Estuary from Benfleet, through Leigh-on-Sea (surely that should be ‘Leigh-on-Estuary’), Chalkwell, Westcliff, Southend and finishing at Thorpe Bay. 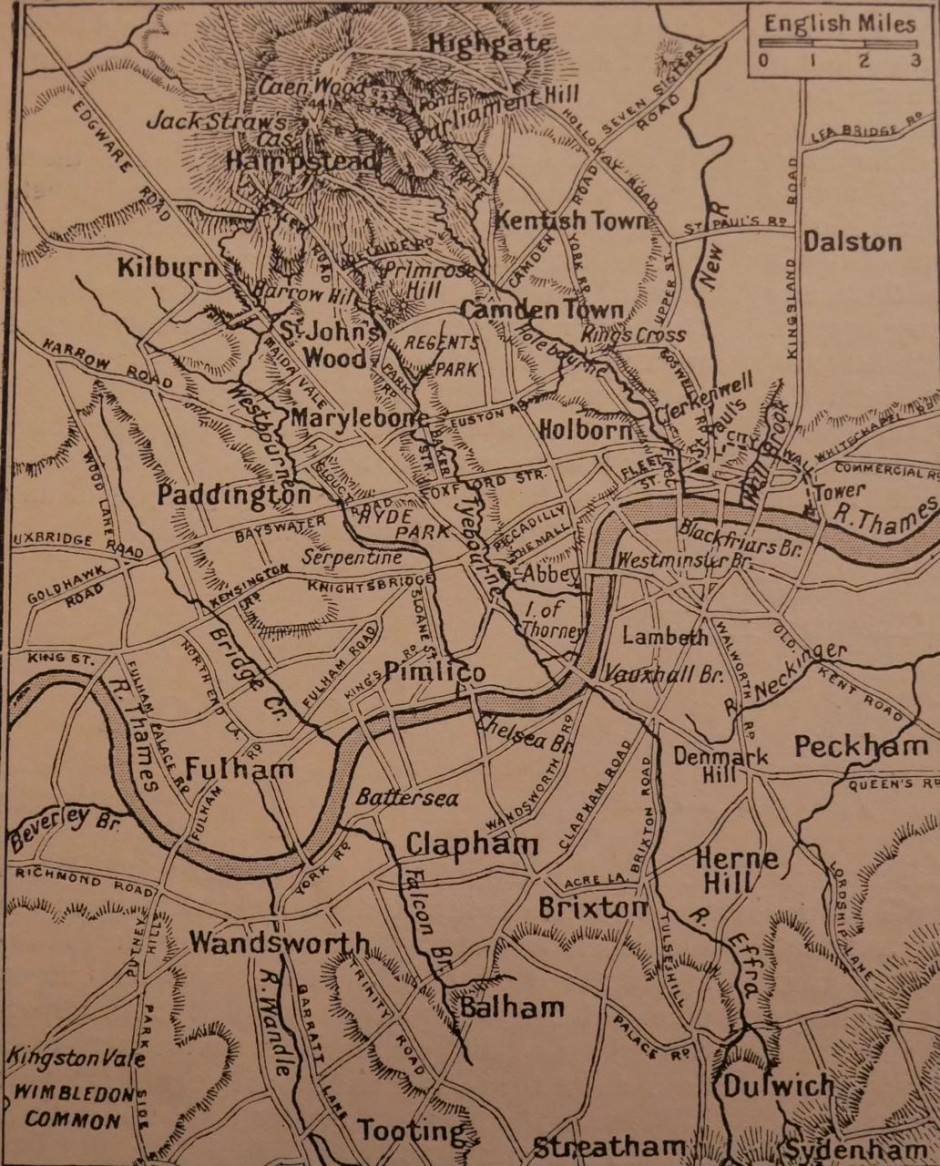 This hand-drawn map from Wonderful London Volume 2 (published circa 1926) shows the Central London tributaries of the Thames – the Effra, the Neckinger, the Falcon Brook, the Wandle. North of the Thames we have the Counters Creek (here marked Bridge Creek), the Westbourne, the Tyebourne, the Holebourne (River Fleet), and the Walbrook. The contours show the high ground where the springs bubble up to the surface and then helped shaped the city we live in today even though all but one of them has been buried beneath the ground (the Wandle being the exception).

In the essay accompanying these illustrations, Alan Ivimey describes the fate of these Thames tributaries:

“They are right in the very heart, or, more accurately, in the bowels of London. For the fairest of these streams have been obliterated from the face of the earth to become dirty drains beneath its skin, or at least emaciated trickles writhing feebly in what remains of their old beds towards the everlasting Thames.”

This simple sketch simply shows the shape of the Thames basin as a cross-section where many further London rivers and tributaries rise and flow. We see the high grounds of Addington Hills near Croydon to the south and Totteridge, Hendon and Hampstead to the North. Herne Hill and Crystal Palace form the highlands of the inner South of London with Primrose Hill marking the highground of North London just beyond the congested centre.

Ivimey describes how London might have looked when the rivers ran freely through the fields:

“In the lush meadows of Westbourne, near the highway to Harrow, the citizen of London could once see dragonflies and loosestrife, or, lying face down in the buttercups, tickle a brace of trout against the coming Friday.”

We rarely think of London in terms of its topography, flattened out in our minds by tube journeys and bus routes. Cross city cyclists tell a different story, feeling the river valleys in their tightening calves. For the walker the shape of London is unavoidable – ascend one of the peaks in this drawing and you’ll see the city revealed.

Across Rainham Marshes along the Thames to Purfleet

A Friday morning and the need to hit open space, to sniff the edge of the city. A hasty perusal of the maps pointed the way to Rainham Marshes and Purfleet with an easy route via the Overground changing at Barking. 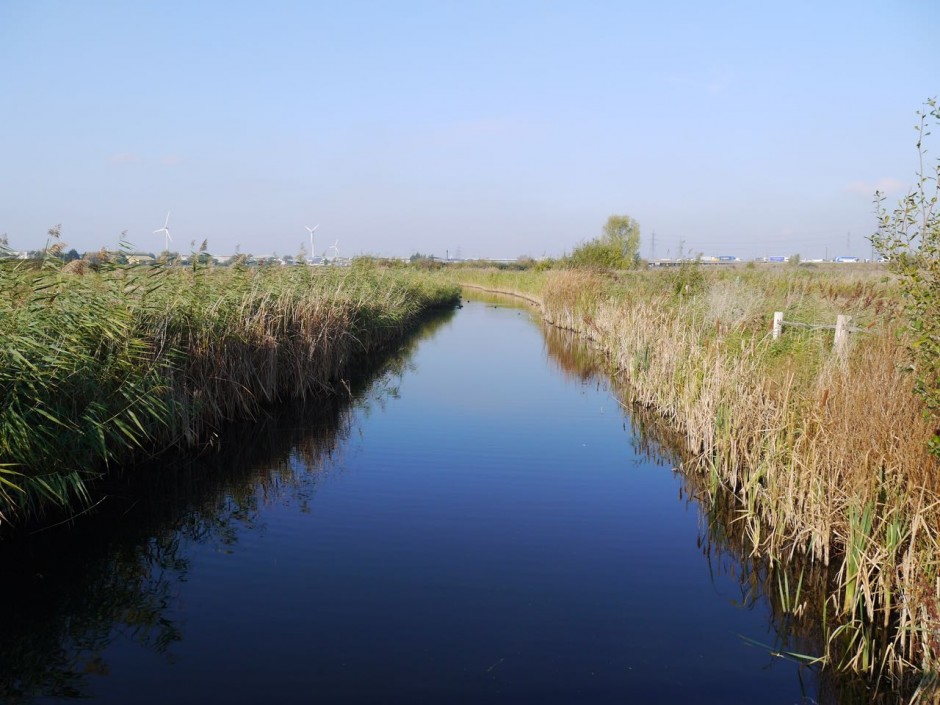 A long ramp leads directly down from Rainham Station onto the edge of the marshland. Birds rattle around in the tall stems of grasses. It feels as if I’m encroaching on wildspace, an intruder. Phalanxes of dried out cowparsley (?) and teasles look resplendent in an unseasonal burst of sunshine. I rest on a bench and peel off layers all the way back to my t-shirt and soak up the last natural heat for months to come. 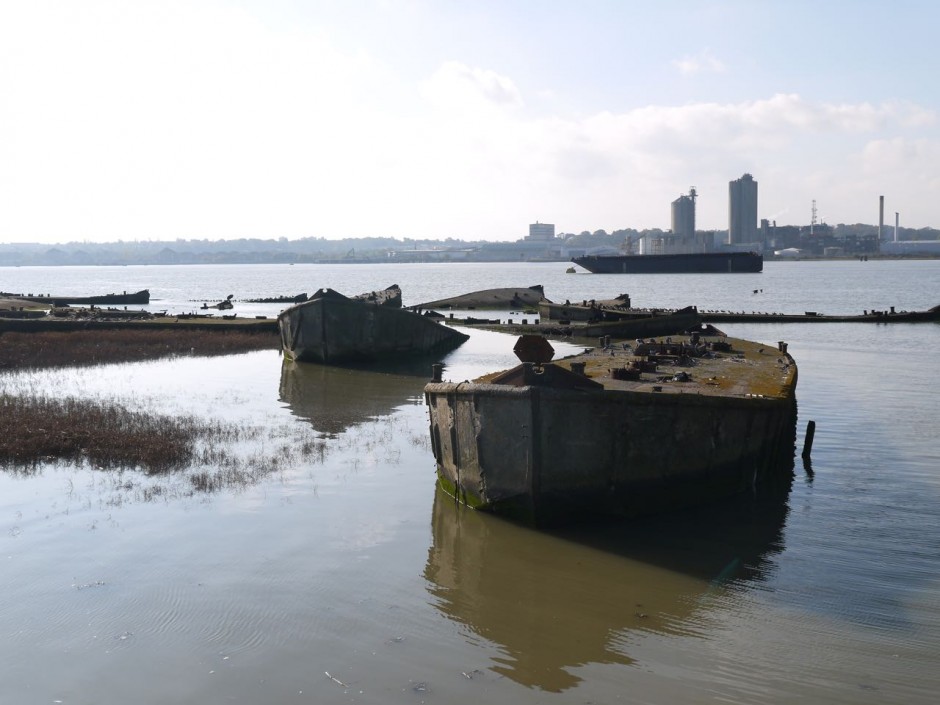 Arriving on the Thames shore at Rainham, the concrete barges lie marooned by the riverbank. Constructed from reinforced concrete they were towed out into the Thames as part of the Mulberry Harbour that played a vital role in the Normandy D-Day Landings of 1944. Then in 1953 they came to aid of the nation once again when they contributed to the Thames estuary flood defences. Now they’ve been claimed by flocks of birds which perch along the decks and strutt the prow. There’s something noble and proud about the concrete barges even as they slowly sink into the estuarine mud. 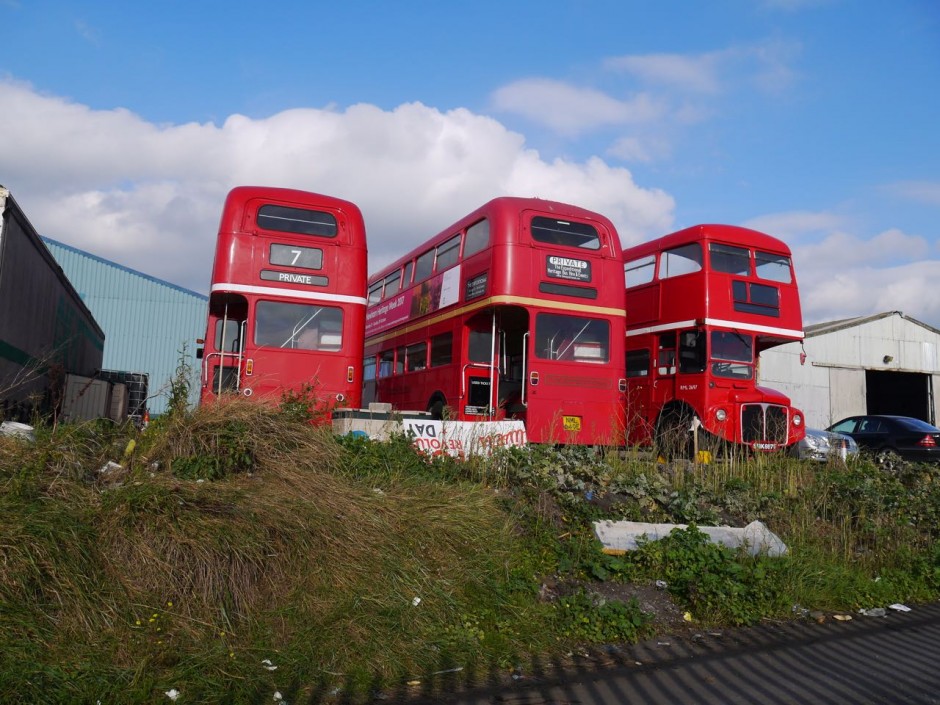 Past the shipping beacon at Coldharbour Point and a fleet of Routemaster buses I arrive at the old MOD firing range on the edge of the marshes near Purfleet, the broken chainlink fence a reminder of that this was a restricted area until around 2000. Now it has found new life as an RSPB Nature Reserve. The past briefly returned in 2013 when an unexploded bomb was discovered during maintenance work requiring a controlled demolition. Makes you wonder what else is lurking buried in the mud. 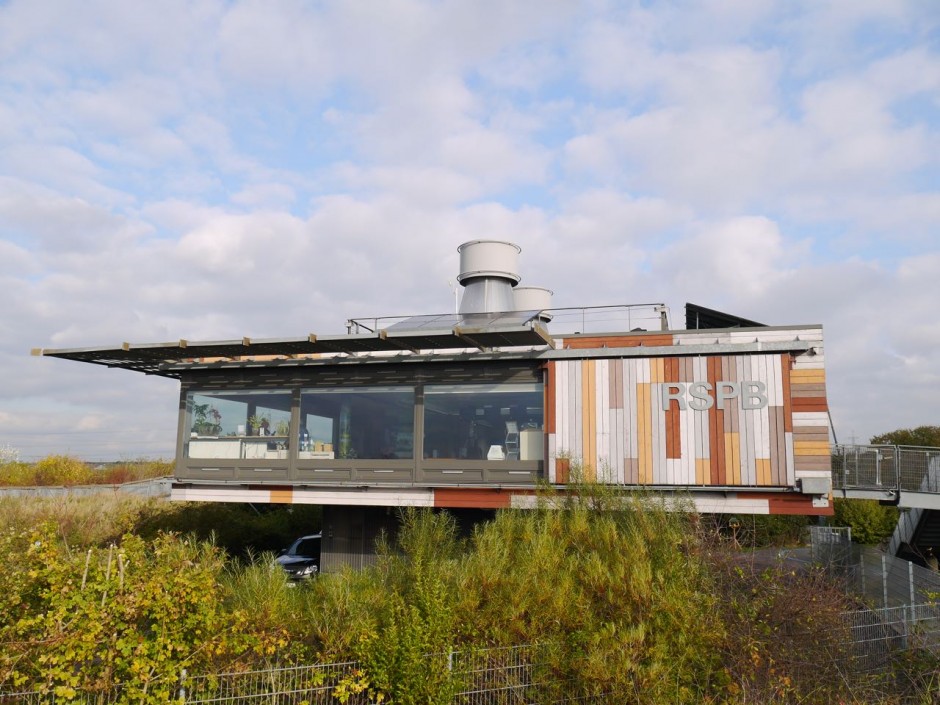 The visitor centre at RSPB Rainham Marshes is a stiking building poking above the marsh grasses designed by van Heyningen and Hayward architects. It strikes me as something you might find on Tatooine in a ‘galaxy far, far away’. Aside from a great view across the nature reserve the centre has a decent cafe where I process the walk sat amongst cappucino sipping Twitchers before getting the train home from Purfleet.