From the Forest to the Lea – Loughton to Broxbourne

A tragedy on the tracks near Brimsdown meant abandoning my plan to catch the train to Broxbourne and walk along the Lea to Hertford. I’d lost 2 hours at Stratford Station and decided to walk off my frustration in the Forest. Picking up my favoured trail at the top of Ollard’s Grove I headed over Fairmead Bottom and plunged into the Round Thicket which consumed me for a while. Somehow the forest delivered me to where I’d set my mark – Ludgate Plain and the paths leading out towards Lippitts Hill. I could still find my way down to the Lea Valley and regain something of the original plan for the day.

Safely navigating a passage across West Essex Golf Course I picked up Green Path, a track I’d been meaning to walk for a few years now. It brought me to a gorgeous meadow of tall grasses with a view of the eastern aspect of Barn Hill, from where up on the northern ridge, there were expansive views of the hills rising around Waltham Abbey. 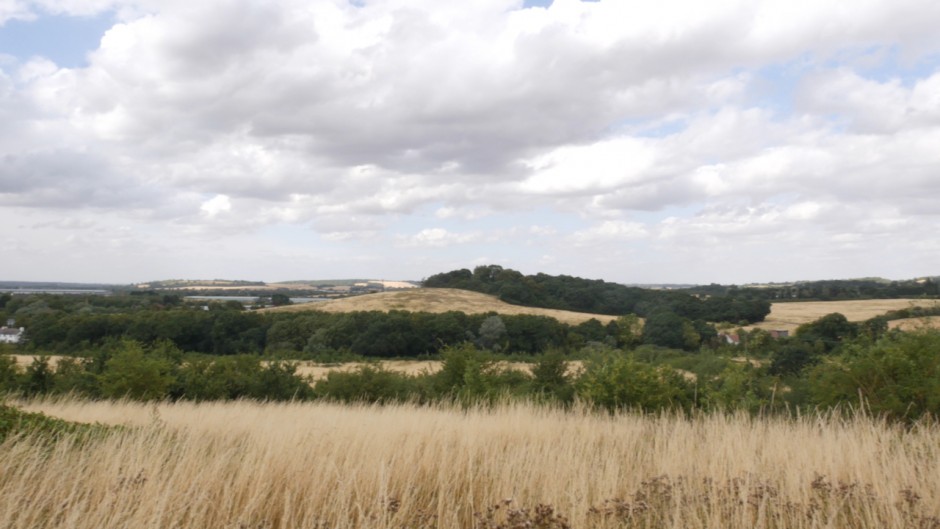 It always feels special crossing the north-eastern boundary of London and I stopped to savour the moment before picking up the Lea Valley path at Sewardstone heading towards Waltham Abbey. Passing beneath the M25 I remembered standing beneath the same flyover discussing London Orbital with the author himself, that book as much a marker in the Capital’s time as the opening of the road. Hungry and tired I stopped in McDonalds, munching a burger and fries on the Essex-Hertfordshire border.

From Waltham Abbey I followed the River Lea Flood Relief Channel. Great views open up across the waters of Hooks Marsh and Seventy Acres Lakes where otters hunker down in their holts and I imagine Viking boats sliding through the reed beds. The setting sun throws luminous rays across Holyfield Marsh, sometimes it feels as if the day’s walk is all about arriving at this moment, a swell of euphoria basking in the last light of the day. 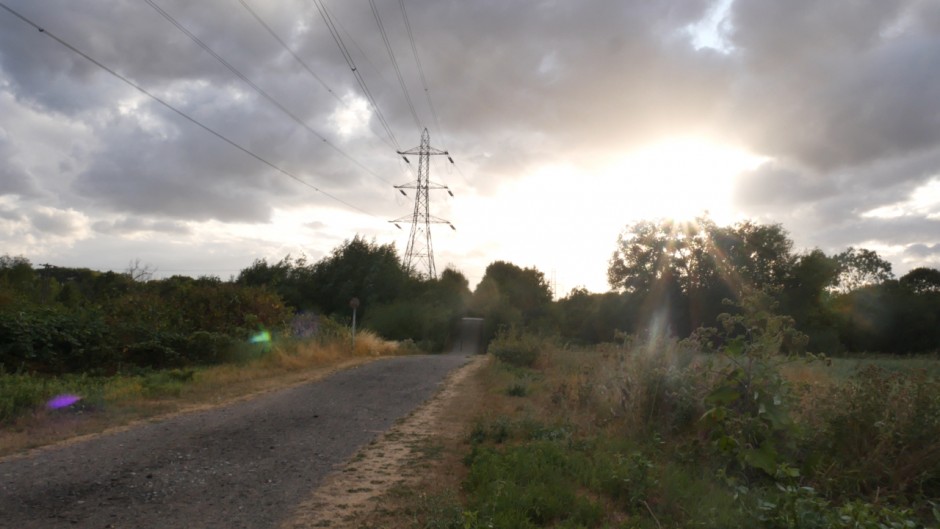 From here I submitted to the Lea Navigation, the mantra of gravel under foot, steps releasing the spores of memories deposited on previous walks, the intoxication of reminiscence. I arrive at Broxbourne as a light drizzle greys the pavement. There’s a satisfaction that the walk ends where it had intended to start. The beginning becomes the end.

With London wrapped in tragedy I needed to get to high ground, it’s a primal urge, safety, perspective. I remembered the walk of 3 years ago, I now realise on the same date – 18th June – an accidental derive over hills and down to Sewardstone for sunset. This time it was deliberate.

The walk down from Woodford was the pre-amble, a loosening that threw in an unexplored corner of the forest near the Warren Pond. Then along Chingford High Street, clocks forever set 30 years behind the rest of London it seems. No chips from Sam’s this time – straight up the side of the Kings Head to the top of Pole Hill – a marker of time, the centre of the world. 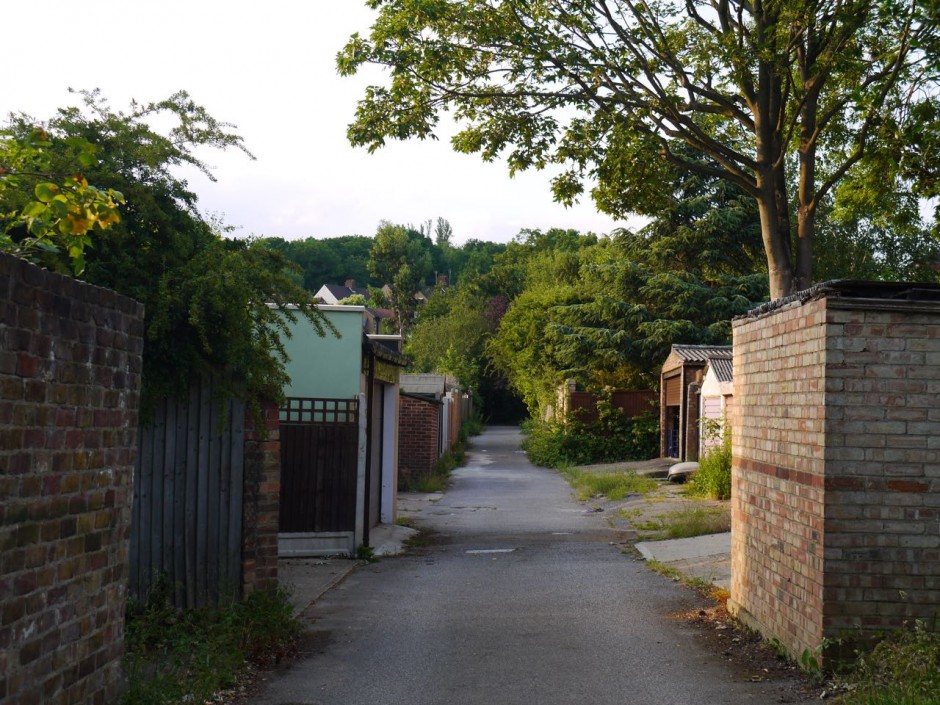 The fields sloping down the spine of Pole Hill were as beautiful in the evening light as I remembered them. A couple had pitched a tent beneath the trees and were sat eating dinner. The views from the top of Yardley Hill were stunning and difficult to wrench away from. The City skyline dwarfed by foregroud trees of Hawk Wood, the enclosure in the forest of pre-Roman times. I could imagine the great Forest of Kent stretching from the south shore of the Thames down to the sea.

Along Sewardstone Green, somehow deep with mud then up and over the final hill with fingers of god breaking out through sagging clouds onto Brimsdown. 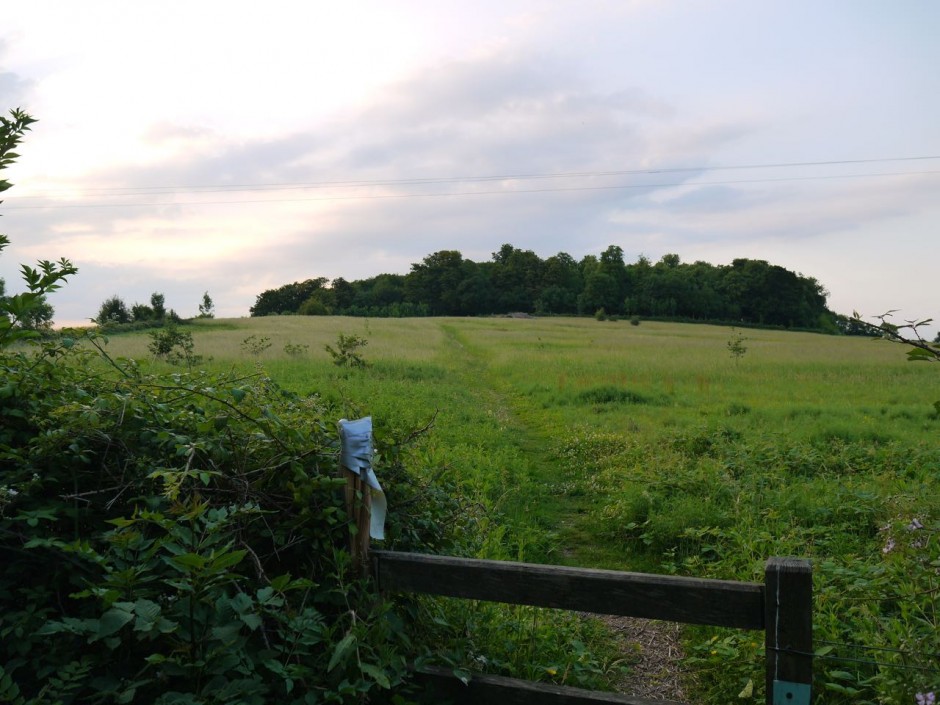 Crossing the Lea Valley at Sewardstone I bisect the walk just before the winter solstice, setting out in pre-dawn from Leytonstone to Hertford, at this point stalked by horses. I give a nod to my winter self and push on along the sunset river banks for Enfield.

‘Travel and Discovery’ by Paula Haughney

Here are a few images from a research trip I took on Sunday for my new book (as yet untitled). I wanted to start at Leytonstone House, the home of Edward North Buxton – author of Epping Forest (1884) the book that informs most of my forest walks. There was more to the Buxton link but you’ll have to wait for the book to find out (and also till I’ve untangled the complicated web cast by the fact the Buxtons seemed to use about two names throughout the family and all marry members of the Gurney banking dynasty).

It wasn’t my intention to morbidly gawp at the crime scene at the Hollow Ponds where a body was recently discovered but it was en-route to the W16 bus stop on Shernall Street. I then walked from Sewardstone to Rye House near Hoddesdon.

The trip just happened to fall on the second anniversary of the publication of This Other London. Work on the follow up is slower than I would have liked but you know, there it is, you can’t rush these things unless you’ve got a publisher breathing down your neck which I currently don’t have. As my friend Nick Papadimitriou pointed out, ‘you’re gathering lots of material’, and he’s not wrong, there’s stacks of the stuff, and I intend to gather a lot more.

I‘d taken a mazy path from Woodford Green, through Knighton Wood, across Whitehall Plain and onto Station Road Chingford for a bag of chips munched on a bench at Chingford Green outside the Assembly Hall which was hosting a performance by the Ex-Servicemen’s Wives Choir. It was like the 1950’s. 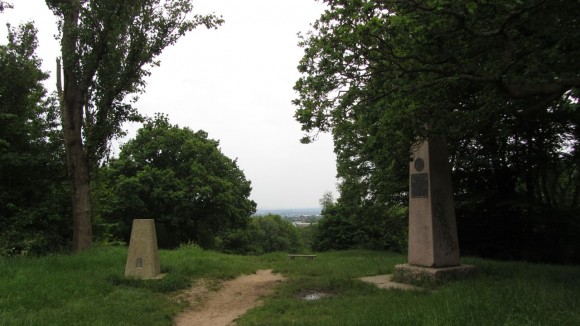 A path in the car park at the rear of the Kings Head pub led to the summit of Pole Hill. I was breathing heavily as I came upon the clearing and soon realised that the view would be significantly better in winter when the bare boughs wouldn’t obscure the vista.

The stone obelisk bears two plaques. The highest records the association with T.E. Lawrence (of Arabia – forever in my mind Peter O’Toole garbed in white and directed by David Lean) who bought 18 acres at the top of Pole Hill where he planned to build a house where he and his friend Vyvyan Richards would print his now famous work The Seven Pillars of Wisdom.
The dream remained unfulfilled but they did build a hut with a pool where Richards lived until 1922. 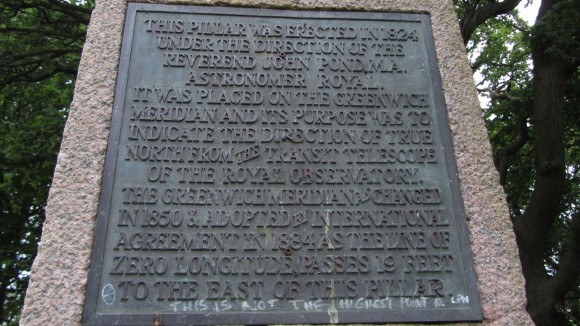 The second plaque – well you can read it yourself – but I take this as meaning that Chingford Green isn’t the land that time forgot but the place where time began. It wasn’t the 1950’s down there – it was the year 130.

I don’t know why some annoying pedant has scribbled that “This is not the Highest Point in Ldn”, nobody claims that it is to my knowledge, a portion of the population of Chingford deny that it’s even in London – refusing to acknowledge the 1963 London Government Act that brought the area into London from Essex. 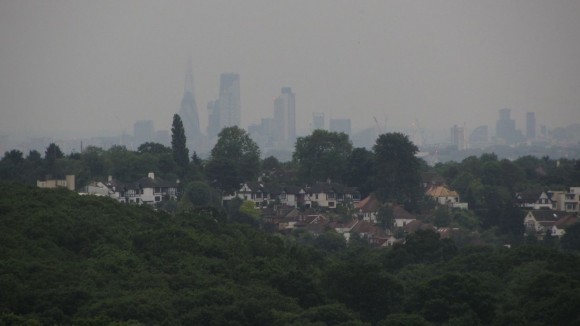 Moving on through Hawk Wood I then made the steep ascent of Yardley Hill through a field of buttercups to fantastic views down the Lea Valley and westwards over the Northern Heights. 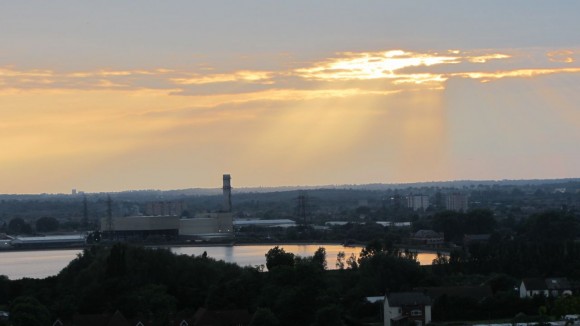 Skirting the huge Scout encampment at Gilwell Park and surviving a narrow country road with no footpath that appears to be a where the speed limits of 4×4 vehicles are tested, I was rewarded with this view from the edge of Fernhill Wood – creation smiling upon Brimsdown. 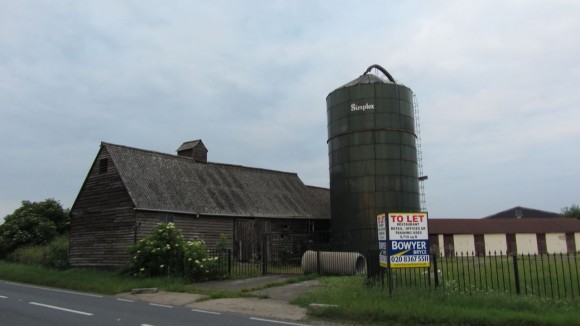 I came down off the hill into Sewardstone (named after, “Seward, a great Saxon thane” – Village London 1883) just before 9pm.  Just beyond the edge of London, a place where the buses stop running at 6.23pm. Sewardstone is an oddity – the only area outside Greater London with a London postcode – E4. I’d long wondered what was out here, the lack of detail on the OS map is matched by the reality on the ground. A couple of farms, a row of houses and a pub with a nice garden … oh and a Premier Inn.

My only desire had been to hit the outer limits of London through the forest, to land on a name on a map like a game of ramblers monopoly. But now the reality of finding some transport back into town hit home. The only thing left was to take the long road schlepp in the dying light towards Waltham Abbey.

The peaceful A21 that bypasses the town centre is as tranquil as the hills and certainly safer than that death track by Gilwell Park. The MaccyD’s on the Middlesex/Herts border, now a familiar waypoint on recent Lea Valley wanders, shows the way to Waltham Cross station and the return to London.