Tom Bolton’s second volume of walks along London’s Lost Rivers traces the paths of eleven subterranean watercourses. Whereas Volume One mapped out the better known lost rivers of London such as the Fleet and the Tyburn – Volume Two is a guide to the more obscure buried streams and brooks that shape the city – the Bollo Brook, Cock and Pye Ditch, Counter’s Creek, Falcon Brook, Hackney Brook, Moselle, and Stamford Brook. Tom took me for a walk along the first river in Volume Two – The Black Ditch, rising somewhere in Stepney Green then wending its way through the East London streets of Stepney, Poplar and Limehouse before making its confluence with the Thames at Limekiln Wharf. 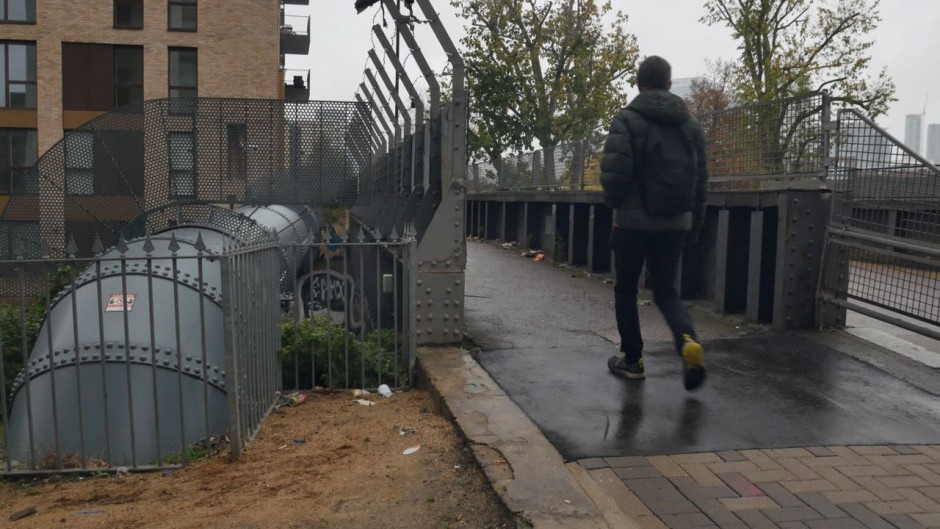 “In it’s very name The Black Ditch reveals its status an unappreciated river. Despite its route, which runs through the heart of the East End, the Ditch is generally dismissed as no more than a sewer.” – Tom Bolton 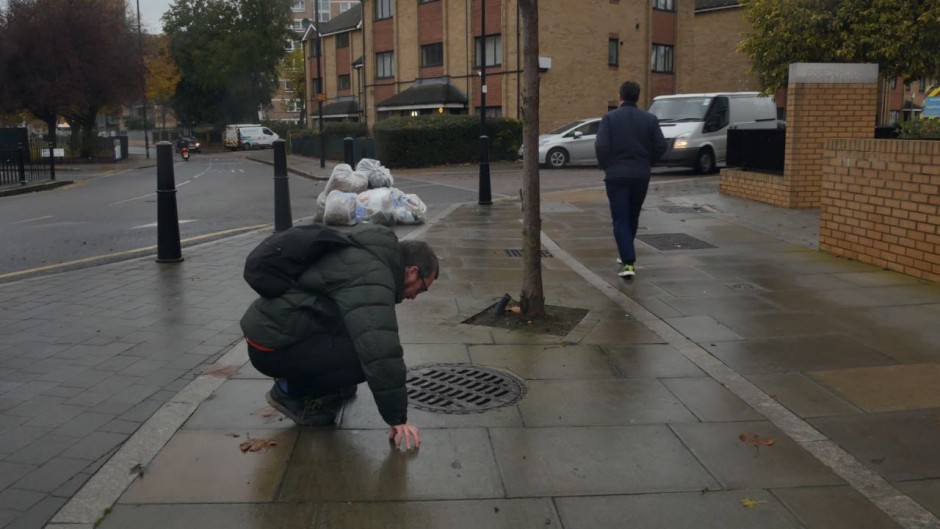 Welcome to New London – Whitechapel to the Lea 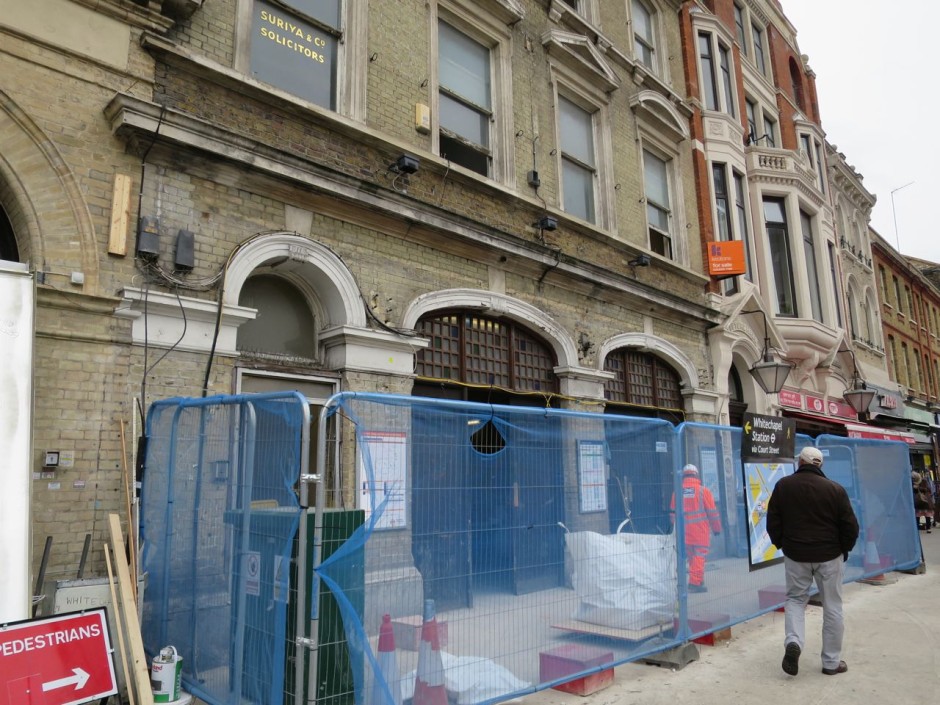 What seemed like a gentle morning stroll turned into a minor epic. The plan was simple, meet Gerry King at Whitechapel at 11am and go for a wander round the area for a couple of hours. Maybe it was the initial shock of the transformation of Whitechapel High Street around the old station entrance – I was only there a couple of months ago but already the beautiful 1911 statue has been removed and the old entrance closed for works.

The only direction we had is that Gerry wanted to avoid Bethnal Green so we walked along Mile End Road for a bit, stopping to admire the Trinity Almshouses and Spiegelhalters Department Store before turning off for Stepney Green. 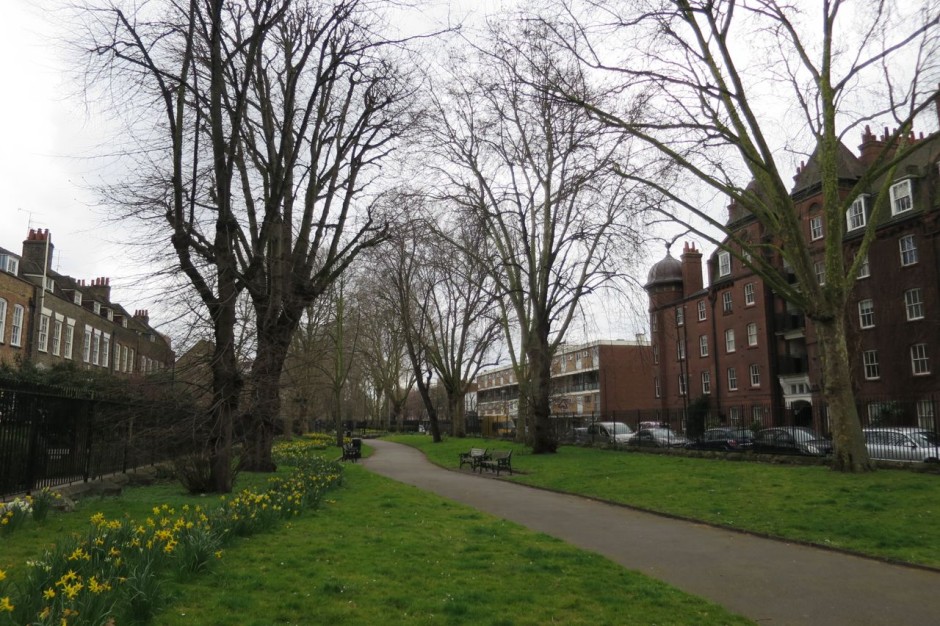 Stepney is one of the ancient districts of East London – the name is said to be of Saxon origin and is recorded in the Domesday Book. It was part of the huge tract of land owned by the Bishop of London that stretched from the City to the Lea. It became a place of manor houses in Elizabethan times then the country retreats of City merchants. There are still some grand houses around Stepney Green and also some fine social housing blocks – one of which Gerry speculated had the look of what was known as 4% housing.

Crossing the Mile End Road puts you in the zone of the river – descending into Thameside marshlands and traffic bound for tunnels and docklands. 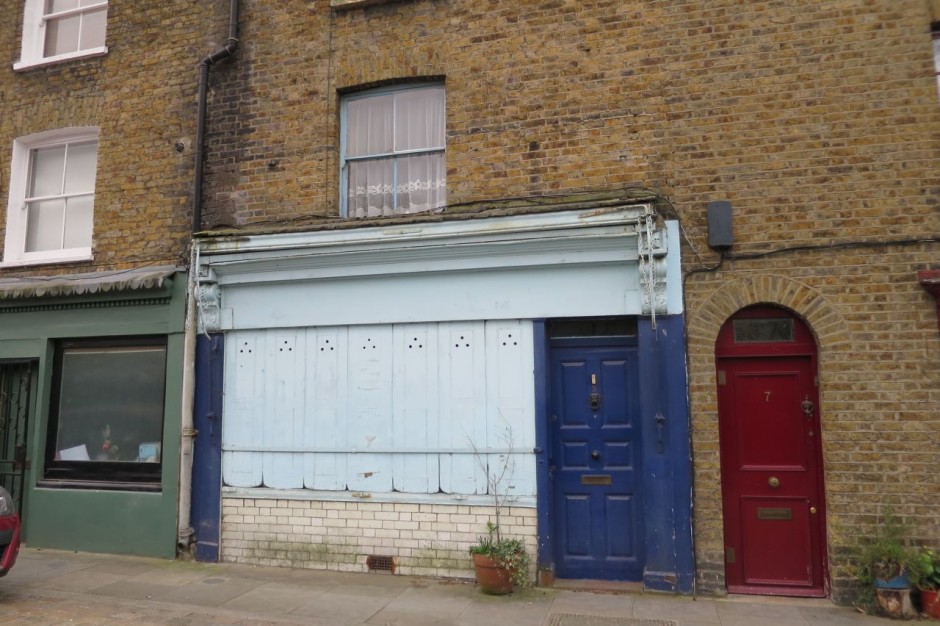 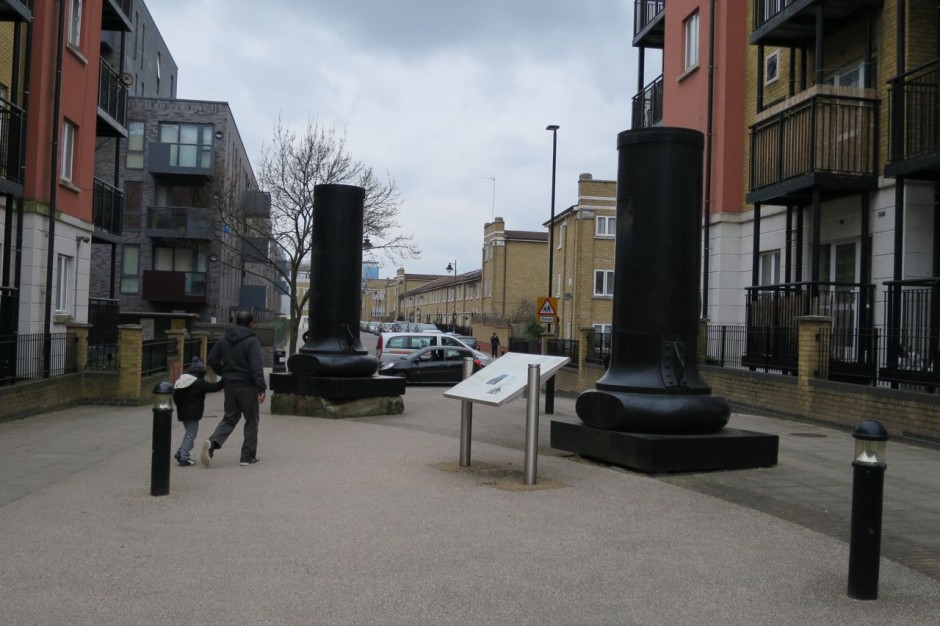 We passed the site where Doctor Bernardo set up his first children’s home. Round the corner, just behind St. Dunstan’s, we stumbled upon a left-behind street of small Georgian terraced houses with some of the old shop fronts.

We passed through the site of the Stepney Gas Works demolished in 2004 with the feet of one of the Victorian gasometers left as a feature in the landscaping. This led us to the canal and a decision point – to head across Mile End park and on to Bow Back Rivers or follow the canal towards the river. We opted for the latter purely on the basis that it offered a more realistic prospect of food.

We had lunch in the Museum of London Docklands before Gerry had to head off. It started raining, we’d had a good walk and I could easily have made my way home. But with a free afternoon I felt duty bound to plough on. 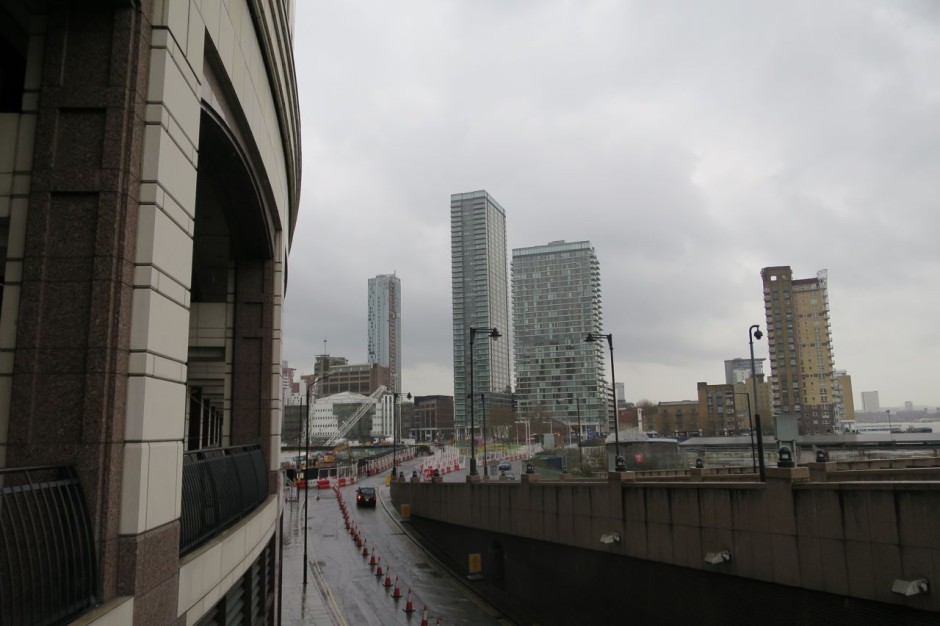 I never feel comfortable around Canary Wharf – maybe because my long hair and beard, general dishevelled appearance brings me unwelcome attention amongst the massed ranks of uniform suits and uniform inscrutable faces. I prefer it on Sunday afternoons when the financial workers are back out in the commuter belt or passing through the neon lit skyline on the DLR at night. But I had a long mooch around the underground shopping mall waiting for the rain to ease, which it didn’t so I pushed on anyway.

I was shooting some video of the underside of the railway bridge with my pocket camera when I heard an inquisitive high-pitched, ‘Hello Sir, hello sir’, I tried to ignore it but it wouldn’t stop. I turned to see a smiling security guard looking at me, a member of the large private army patrolling the fiefdom of Canary Wharf. They seem to have chosen a uniform that is confusingly similar to a standard police uniform – bearing in mind that they could wear anything, why not take a lead from the world’s most famous private security force, the Vatican’s Swiss Guard and wear red velvet with great plumes of feathers sticking out of your head. But private security firms in London seem to have a penchant for imitating the legitimate force of law and order in London – the Metropolitan Police. Are these people who were too short of too flat footed to make the actual Force?
‘Do you mind if I ask what you’re doing?’
I told her
‘Do you mind if I have a look at your photos?’
I said that I did
‘Could I have a look anyway?’
‘You can but I’m not deleting anything’, I said
I deliberately scrolled back to the beginning of the walk in Whitechapel and talked her through each shot of the entire walk.
‘Oooo they’re nice photos’, she said
‘Why did you ask to look?’, I said
‘In case you’re taking pictures of the CCTV cameras and security arrangements’
‘And what if I was – you can’t make me delete them’. She didn’t answer. And off she went.

It feels like a form of low-level harassment – a gentle reminder that this is private property and that you’re being watched. What it actually makes me want to do is return with my big camera and photograph every CCTV camera in Canary Wharf. 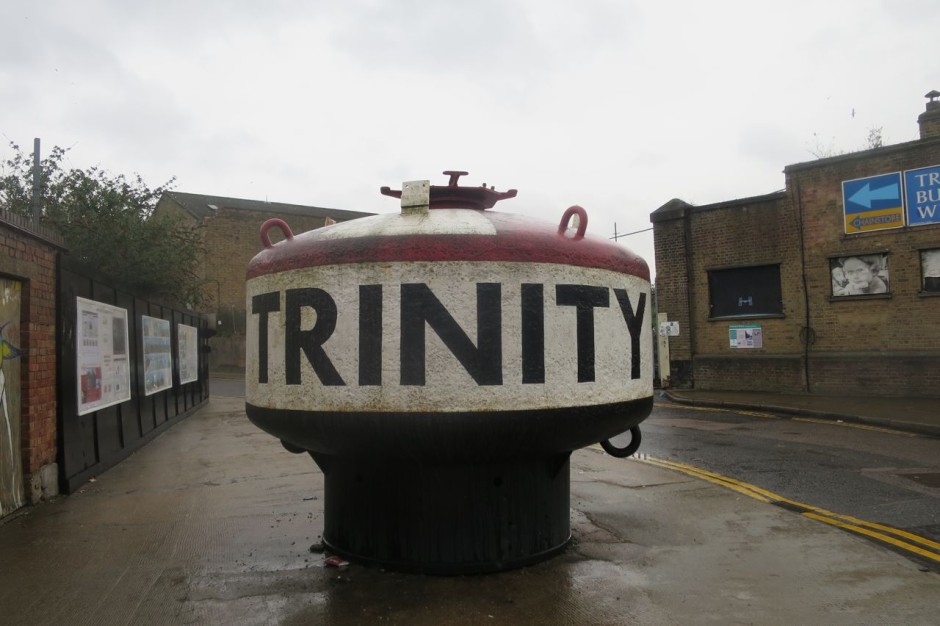 I tried to shake it off and retreated from this citadel of corporatised global capital along the pulsing Limehouse Link Road, rain lashing down, slicing through clouds of pollution like hacking through mangrove swamp.

Eventually I stumbled into East India Dock Basin reclaimed as Salt Marsh – a fitting sorbet to wash away the nasty aftertaste of Docklands. The exit leads to Orchard Place and Trinity Buoy Wharf. Jem Finer’s Longplayer installation in the Lighthouse is closed, I mooch about a bit before standing over one of the most sacred spots in London – the confluence of the River Lea with the Thames. 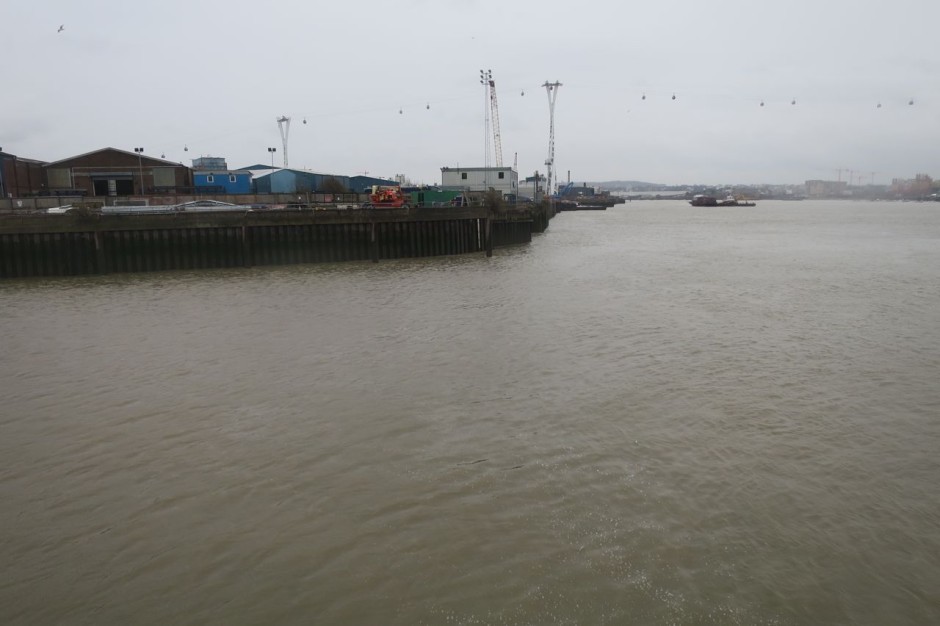 In London on the Thames (1924), H. Ormsby puts forward the idea that there was a significant port at the mouth of the Lea that formed part of a communication route with Europe until the Romans built their port further up the river in what we today think of as a the heart of London – but in the Bronze and Iron Ages this site may well have been the centre of power in the nascent city.

You could possibly trace the current blitz of rapacious property development in London back to the flood of government cash poured into the Lower Lea Valley for the 2012 Olympics. Ken Livingstone openly admitted the motive for hosting the Olympics was to encourage foreign in investment into East London. From here, the bonanza of overseas money from pension funds, oligarchs, state investment funds, banks, gangsters, dictators, drug dealers, and hedge funds has spread out through the rest of London like a zombie virus. So in a way the Lower Lea Valley is once again the driving force in the changing nature of London. 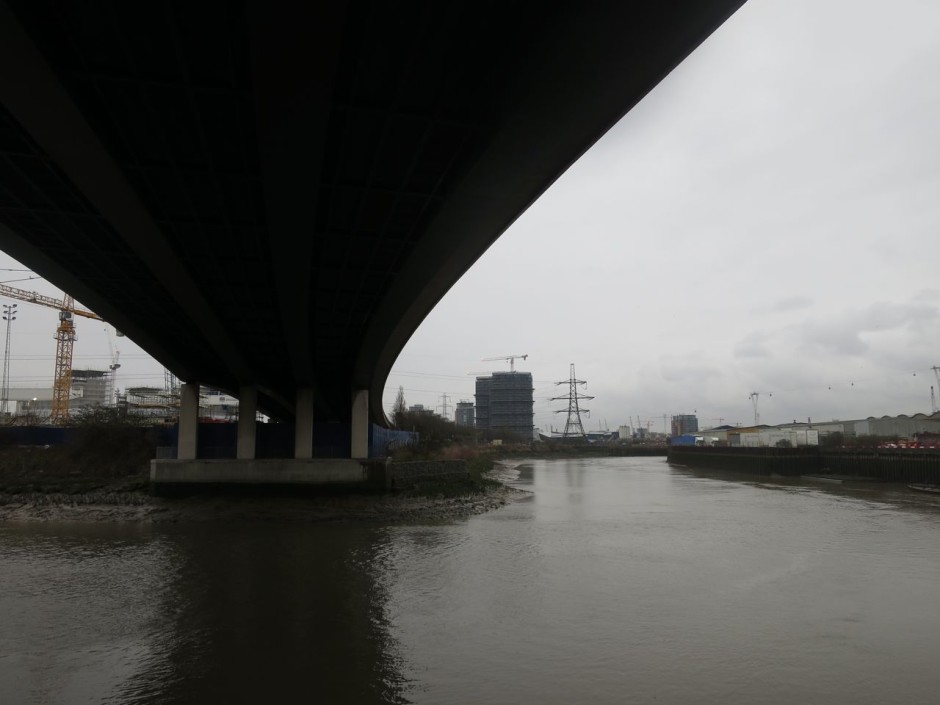 The iconic pylons straddle the river near the flyover. The Lea Valley fans out from this spot. In the 10 years of living in Leytonstone I have only recently developed a regional identity attached to the Lea Valley. When I first moved out here Waltham Abbey seemed like a distant provincial outpost – Holborn and Islington where more my stomping grounds. Now my homing instincts draw me towards Waltham and beyond – into the forest that tops the valley. 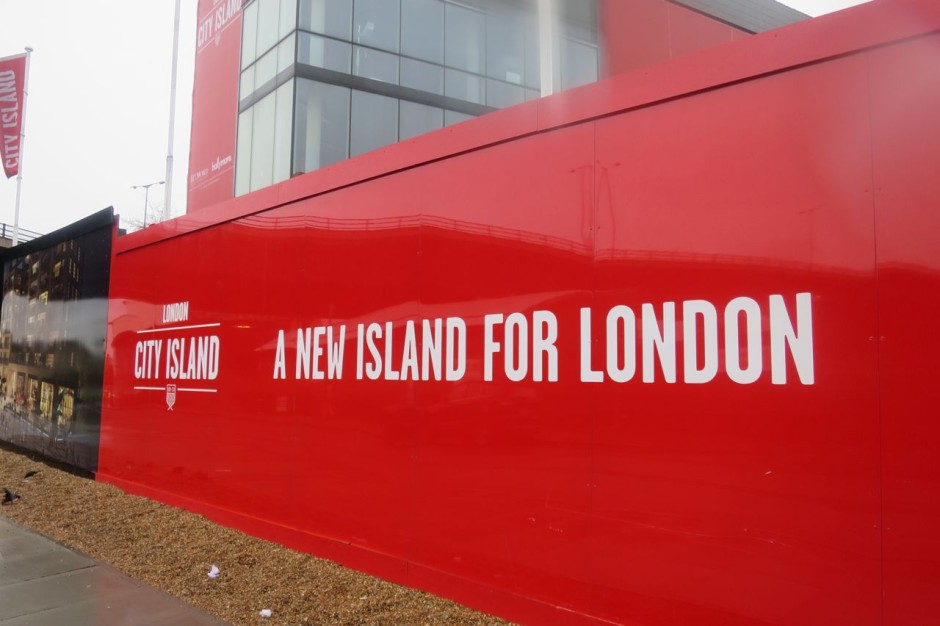 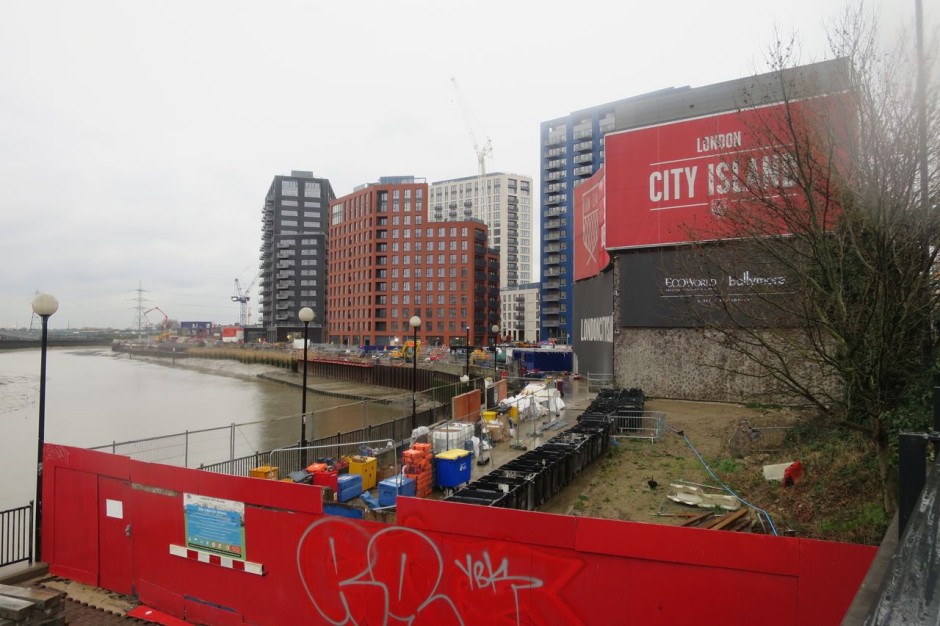 I try to follow the river north but soon find myself having to weave in and out of the City Island construction site. The workers finishing their shift are wary of the camera and give me a wide birth shooting furtive glances back in my direction. It’s still pissing down and I’m wet through and tired but I can’t allow this to be the end of the walk – it would feel as if New London, this private corporate London, had won. I plough on. 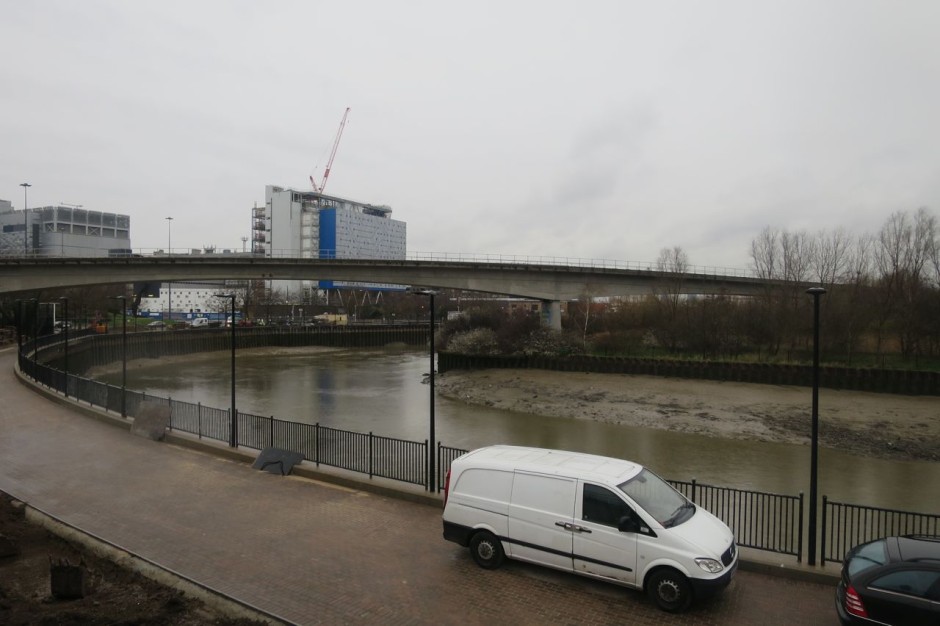 Eventually I find a gap in the security fencing screening off the river and make my way down to the path. Here is the ending I was seeking – standing beside the Lea, tall reeds swaying in the acid wind, the river running free and proud and just waiting for its moment to rise and reclaim the land we have foolishly appropriated for ourselves.