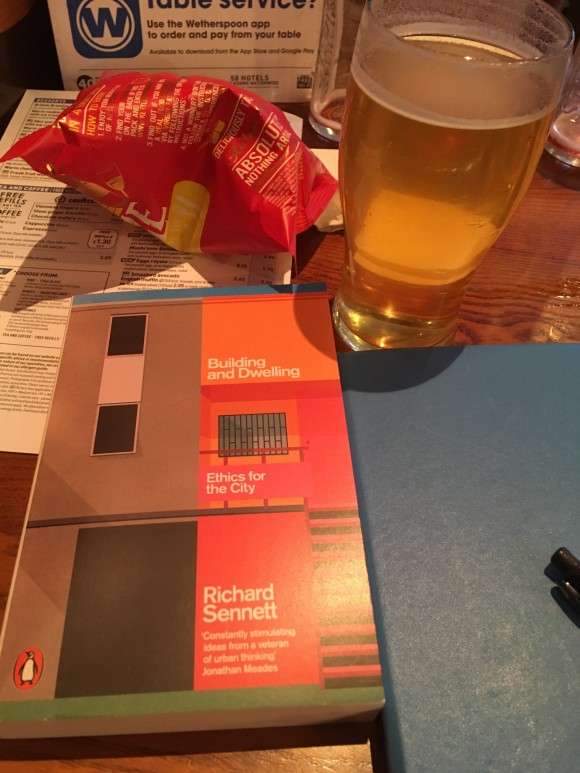 Afterwork return to Angel Waterstones following a lunchtime scout that threw Richard Sennett’s Building and Dwelling – Ethics for the City into my path. I laid down the cash mainly for the 8 pages on urban walking but also for its handsome cover (unflatteringly lit in the Highbury Corner Wetherspoons), and as a momento of U.N commissioned film for which I shot the London sequences, that featured Richard Sennett, and was based around a thesis he had developed with Ricky Burdett and Saskia Sassen. The screening of ‘The Quito Papers – towards the Open City’ at the LSE in 2017, followed by a panel discussion, was a fascinating evening. 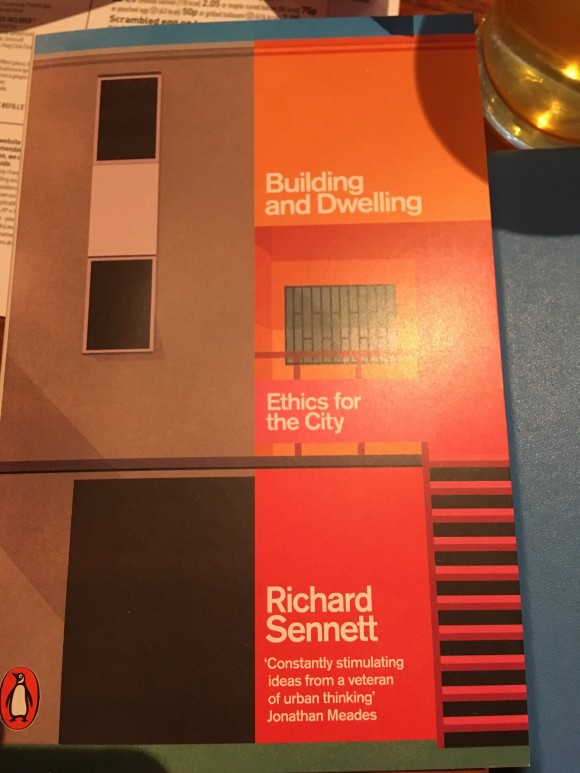 The stimulations of walking have appeared quite differently to a more prosaic figure – the planner who seeks to organize movement.Richard Sennett

Milton Keynes – City of the Future

I didn’t even bother to check my iCal when Andy from Video Strolls asked if I wanted to come to screen in their event at Milton Keynes Gallery – I just said YES! I’ve shown films in two Video Strolls events in Birmingham and had a great time, but here was the added appeal of an excuse for a wander round Milton Keynes at night.

I’d bought a GoPro on the Monday of the week of the screening for the Nightwalk I filmed with Iain Sinclair and Andrew Kotting for the Overground film. I’d be leaving Iain and Andrew at Hampstead and the plan was that Andrew would wear the GoPro on his head to capture some of the remaining epic nocturnal schlepp (he did and it’s great). 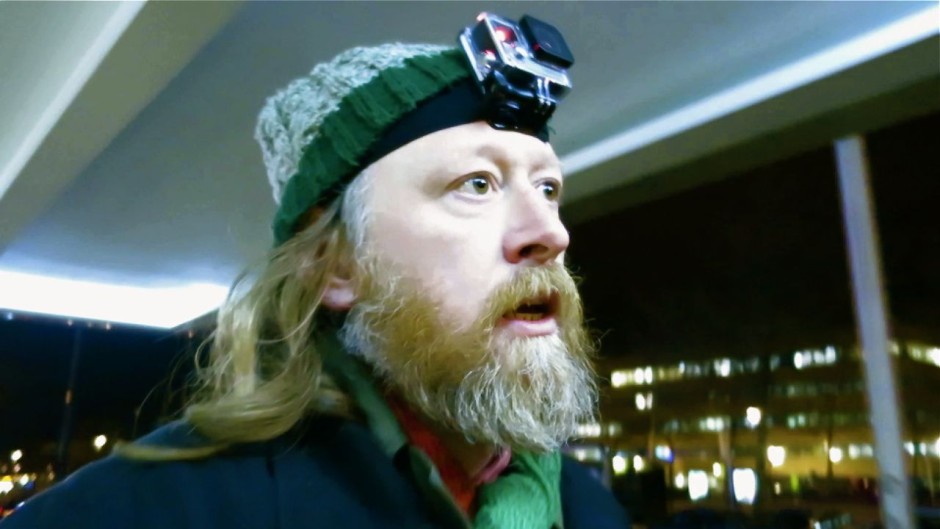 Arriving at Milton Keynes station 10 minutes before the event was due to start I strapped the GoPro on my head and set off across the Milton Keynes grid bound for the gallery on the FAR SIDE. And wow.

I visited Milton Keynes as a kid on a coach trip from High Wycombe with my Mum. Nominally in the same county as Wycombe but further away than London, Milton Keynes was the new town on the map – the concrete citadel of the future rising from the lower end of the Midland Plain. We felt like primitive people from the Amazonian jungle propelled into a Flash Gordon future on a Green Line Bus. I’d never been back since. 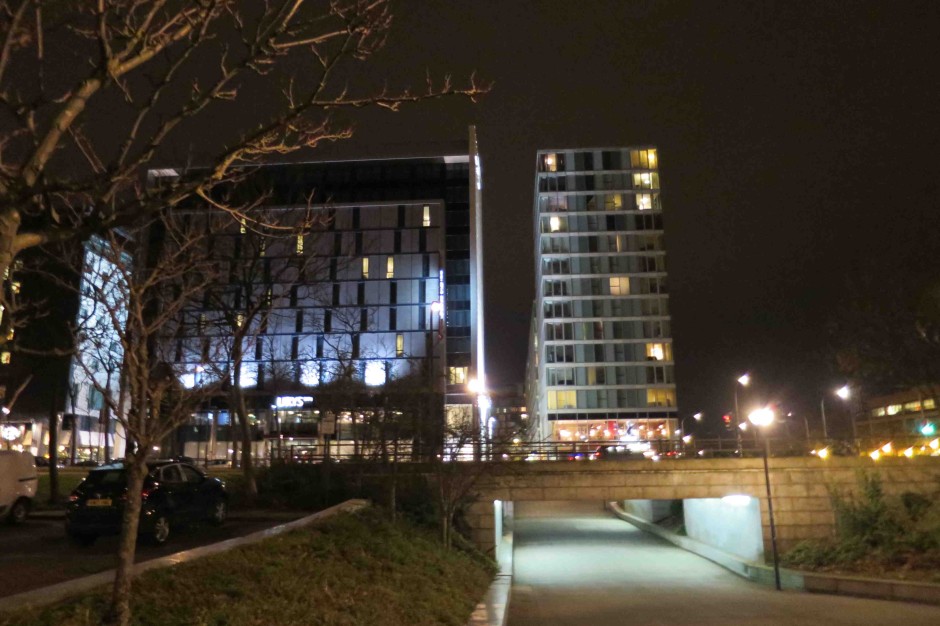 Although my hazy memory of MK matched what I was seeing 30+ years on – Milton Keynes still seemed futuristic. I think it’s the absence of any other older reference points – a blank architectural slate and the clinical nature of the urban planning. The imposition of paganistic street naming and alignments – Midsummer Avenue is apparently aligned with the Summer Solstice sunrise – has an ‘Age of Aquarius’ tinge. I kept seeing Blake’s Seven super-imposed over the shopping halls – partly because that’s what I was obsessed with at the time I visited Milton Keynes in the 1980’s (Glynis Barber did so much to get me through those difficult early teenage years).

So I swept in late to the Video Strolls event with the red light on my GoPro flashing and introduced my River Roding film with the camera still rolling (don’t worry, the video above is intercut with my point-and-shoot camera). After the screening I walked back through Milton Keynes with Andy Howlett, one half of Video Strolls, and we attempted to process our reactions to this uncanny landscape and ponder on the future of films made purely from strapping a GoPro on your head when out for a wander as a perambulatory equivalent of the early cinematic ‘Phantom Rides‘.

I’ll need to get the camera set on my head straight for a start.

"Cities are not the opposite of 'nature' 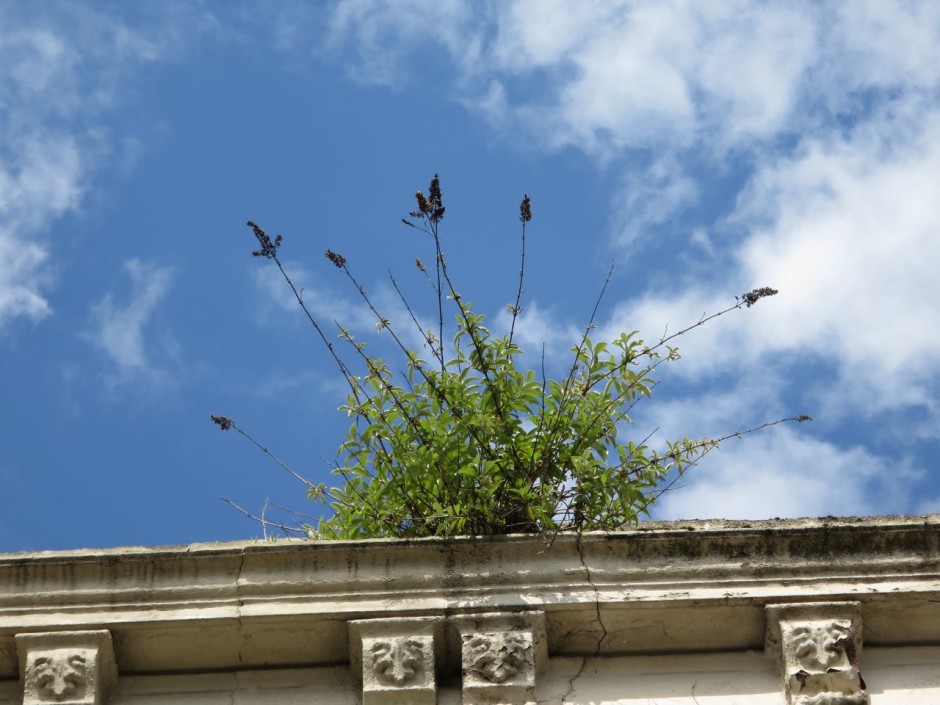 The rise of urban walking

Made this short animation last night with a few facts about the rise of urban walking – particularly in London where ‘active urbanites’ as Tfl call them, are reclaiming the city.

I just found this interactive map created by the GLA that allows you to keep track of planning applications in your area (and beyond if you wish).

Clicking on the icons reveals details of everything from loft conversations to the building of mosques and temples, schools and office blocks. Within it are the contentious developments blighting the city – galleries evicted from Cork Street to make way for flats, residential tower blocks in Soho, huge schemes at Smithfield and Mount Pleasant … on and on it goes all over the city.

Profile of a city – experiment

City Experiment from fugueur on Vimeo.

At the end of a project comes the sorting through some hard-drives – clearing the decks. The mind starts to think about the next film, without any pressure at this stage.

I found some fragments on a sequence in the London Perambulator folder – bits of archive footage from the Prelinger Archives, some ephemeral shoots of pre-Xmas crowds in central London and a tracking shot through Leytonstone station with my son holding the camera on his lap in a pram and was passed through (you can hear him campaign when go we back for another pass).

I’m wondering whether there is a germ of an idea in here that could be expanded into my next film – I’ve made two portraits of people, maybe the next one could be of a place. I’m shooting footage on walks I’m doing for a book (published in September 2013) – could that merge with some of the footage above. Who knows – it’s all up for grabs at the moment – this is the fun part. 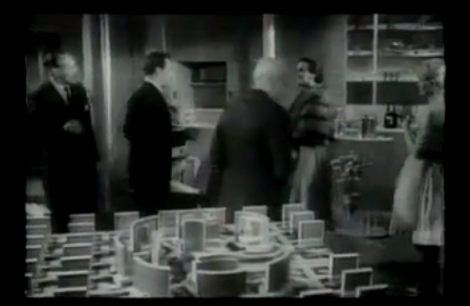 The architect in this 1960 London-set film, Beat Girl, shows his new wife his model for a future city he calls City 2000
“Grime, filth, poverty, noise, hustle and bustle, these things will be unknown”