Twilight wander through the Olympic Park 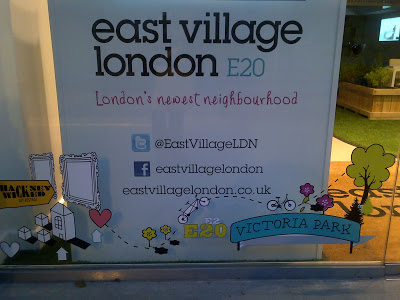 I still don’t understand the Westfield-Olympic Park retail gulag – just can’t process what it is. This sign and the plans for the new ‘east village london E20′ is making my cognitive dissonance even worse – should I be excited by the emergence of a whole new area of London rising out of the marshes just down the road? But why do feel a combination of fear, horror and anger. 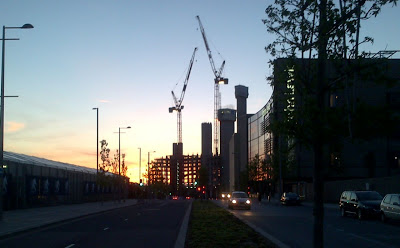 I got drawn along the inspiring and imaginatively named Westfield Avenue towards the expansion of this miniature Singapore. 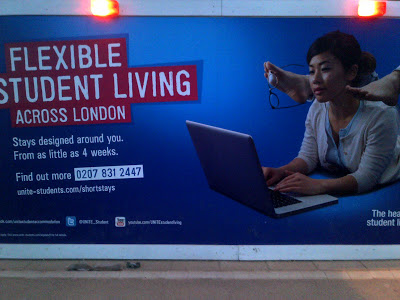 The new mega-ghetto is this high-rise block of student apartments. Clearly the student rental market is a more lucrative investment than when I moved to a terraced house just off the Romford Road in Stratford at the end of the 80’s when landlords were actively discouraging student tenants.

The cynical suspicion that ‘east village E20′ is being set up as a privately-controlled outpost of transient, well-off, passive consumers with MBAs rather than ASBOs is offset by this glorious view north across the top of the Velodrome to a dark smudge of distant hills. 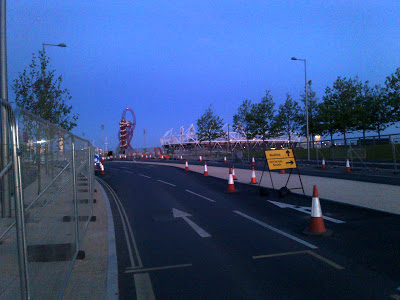 Although there is a steady trickle of traffic, the fact the footpath is fenced off starts to make me feel as if the way isn’t formally open to pedestrians. This makes me even more determined to push on towards Hackney Marshes. 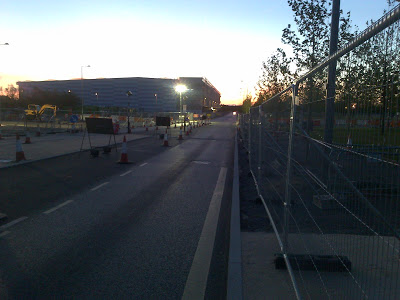 Soon there are not even bollards to separate me from the 4x4s who seem to be enjoying the smoothness of the newly laid tarmac a bit too much for comfort. A voice with a strong African accent calls out, ‘Excuse you can’t walk here’. It is a female security guard in her hut. ‘You need to go back the other way – I am worried for your welfare’. I take her careful advice. Beyond the hut there was not even a kerb to tightrope walk along, and the light was all but gone. 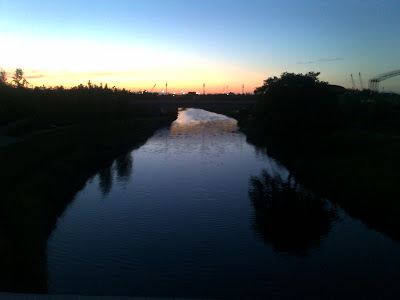 The park looks far from finished, and I shared a joke with the security guard that the the summer opening may take place in November but that they’ll call it ‘late summer’ somehow, like calling the new suburb ‘east village’. Whatever they call it, and whatever they build – the once mighty River Lea couldn’t care less, it’s just waiting for a chance to reclaim the marshes.