I felt an undue amount of pressure when trying to choose where to go for the 100th Episode of my Walking Vlog series. When out walking from Theydon Bois to Chigwell Row for the 98th Episode I’d asked the YouTube viewers for suggestions and they’d really come up with the goods. But one particularly resonated, from talented author Scarlett Parker:
“The hundred dilemma got me thinking about ‘hundreds’, the geo-administrative divisions of yore. Not sure how you could rein in this concept for a manageable walk. There are the famous Chiltern Hundreds, which is your, erm, jurisdiction.”

This was perfect – the Chiltern Hundreds > The Desborough Hundred Psychogeographical Society that I formed with my sister Cathy for our Remapping High Wycombe project > the significant sites walk we devised to bring the project to its conclusion. There was added significance in that I started my YouTube channel for this project to host some of the video documentation.

Walking into town from Wycombe Station I ticked off the first of the significant sites/’nodules of energy’ – the Dial House, home to Charles I’s physician Dr Martin Lluelyn; the ancient lane of Crendon Street; the supposed ‘mark stone’ by the Guildhall, and Robert Adam’s market house which we used as the HQ of the DHPS and installation site for the event on 18th June 2005.

The temperature that day 13 years ago was hitting the high twenties and again the mercury was pushing upwards at 27 degrees. It’d be hard going in the hills. I’d mustered some walking partners back then to make it more of an event – an old friend Jerry White, who’d brought along a mate, my Dad, and Nick Papadimitriou who’d I’d recently met for the first time. Today I’d be reprising the experience alone.

I gathered my thoughts in the churchyard before pushing on up Castle Hill Mount, said by some of the old Wycombe antiquarians to be partly formed of the burial mound of a Saxon warrior. The route onwards into the Hughenden Valley takes me through the grounds of Wycombe Museum, past the house where poet & composer Ivor Gurney stayed, and along the path above Wycombe Cemetery.

Looking back down into the valley there’s a stretch of newbuilds that highlights one of the major changes in the town. Gone is the great engineering factory of Broom & Wade and also Harrison’s Stamp Factory, and a student accommodation colony has taken the place of the industrial heart of Wycombe. When I’d led Nick, Jerry and Mike through this section in 2005, this was what made them see Wycombe as a town with its own distinctive industrial heritage, not just another satellite commuter town. Now that it’s gone – what does this say about Wycombe today? 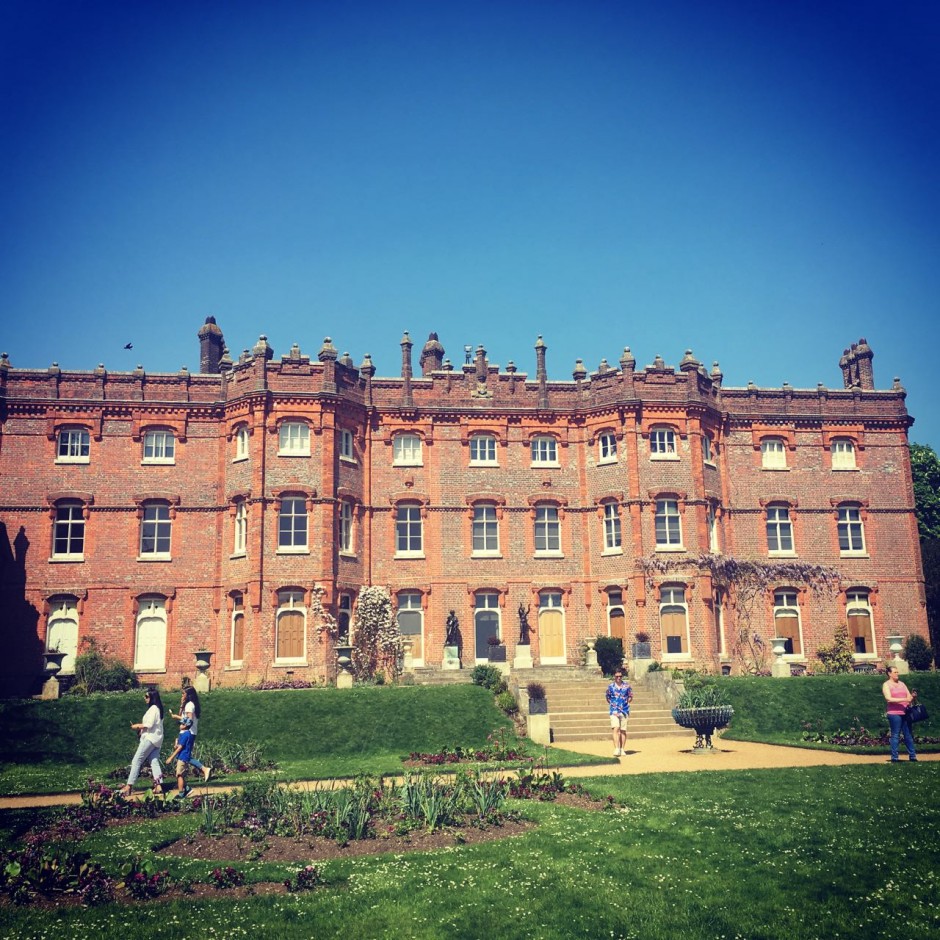 The heat is taking its toll as I climb up the Hughenden Valley to admire the view from the terrace of Benjamin Disraeli’s grand mansion. I daren’t rest yet as I have to drop back down into the valley then climb again to the (Isaac) Disraeli monument on the edge of Tinker’s Wood. Beneath this monument is where I’d rested on previous variations of this walk and it’s where I take a moment to pause once again and consider the passing of the previous 13 years since I was here last.

The zig-zag streets of Downley offer yet more great views across the valley to the Iron Age Earthwork at Desborough Castle – my next point of interest. The outer banks are high and imposing, but thankfully the dense tree canopy offers respite from the sun. I imagine the Desborough Hundred Moot taking place within the sunken enclosure in the deep past, as envisioned by Annan Dickson in his 1935 book, Chiltern Footpaths. 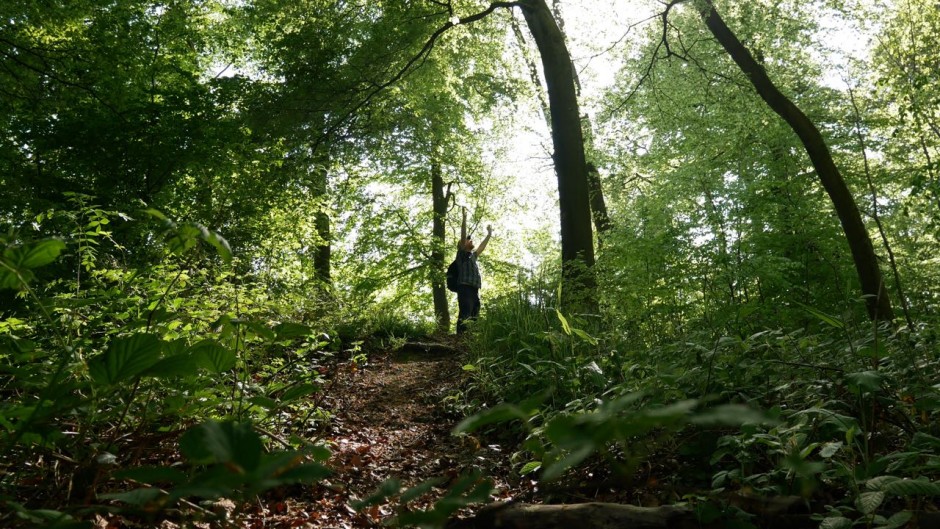 Back down in town it feels as if another kind of grand gathering is taking place upon the Rye. The grass is dotted with puddles of pink flesh soon to turn lobster red. Boaters splosh their oars in the Dyke. The open air pool where I learnt to swim is sadly closed for the rest of the day. 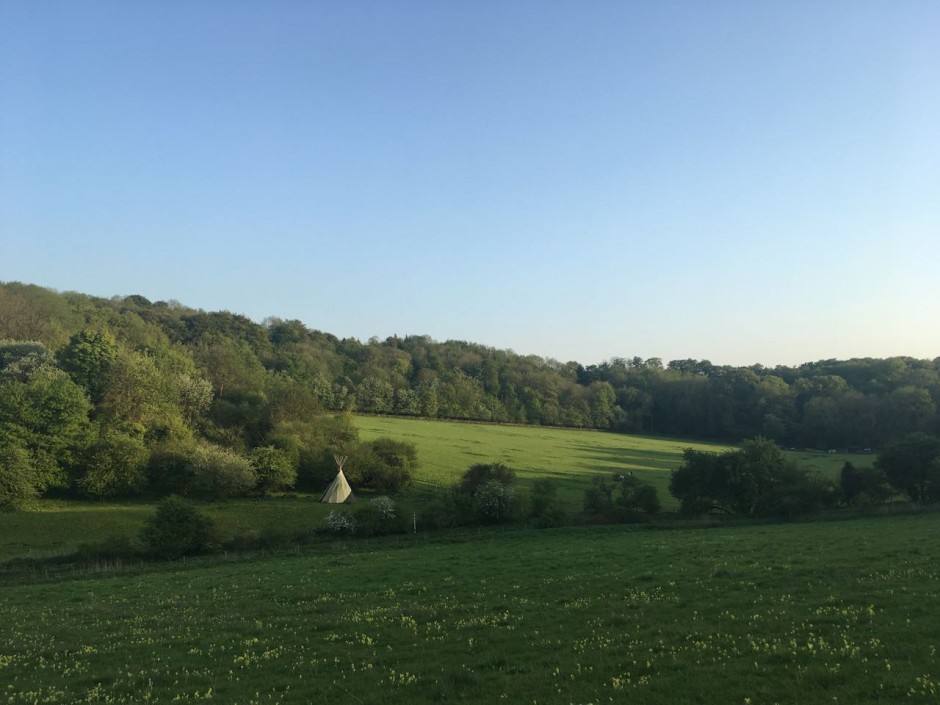 From the Rye I follow the patron stream of the area – the Wye, or the Wyke – trundling quietly behind the Marsh and the Mead to Loudwater where my Mum grew up. By now I’m tired and just want to sit in a nice pub garden with a cold pint. I could drop down Watery Lane to the Falcon at Wooburn, near the field where I played as a kid. But that would be the end of the walk. No, I stick to my plan to climb one last hill (so I thought) up Whitehouse Lane and along Grassy Bank looking over to Cut Throat Wood – a place that so dominated childhood days walking with my Dad and many a wistful recollection of those happy days. It’s the perfect ending to this revisiting of memory grounds, that further pushes me on under the railway line and up into the quiet roads leading into Beaconsfield Old Town and the train back to Marylebone.